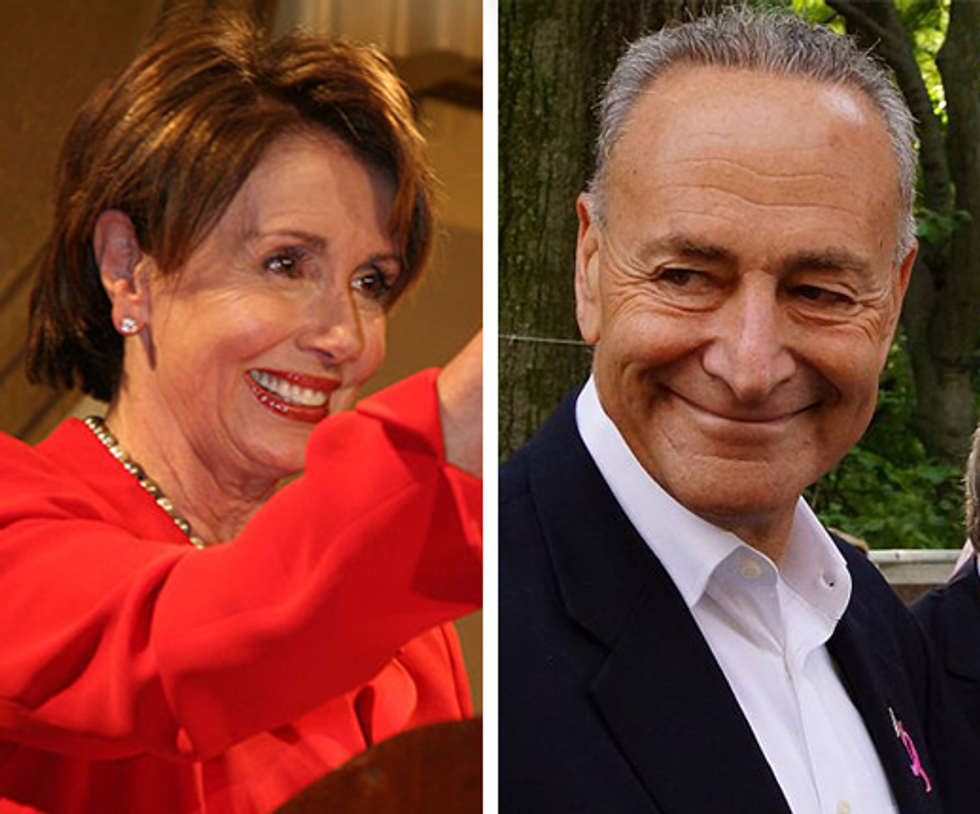 One of the big roadblocks on the horizon before Democrats can start making use of their new House majority is the question of whether to make Rep. Nancy Pelosi (D-CA) Speaker of the House again.

While Pelosi is publicly confident she has the votes to regain the Speaker's gavel, a small band of rebellious House Democrats, including Reps. Seth Moulton (D-MA) and Tim Ryan (D-OH), believe they can block her. Pelosi faces both centrist Democrats in the Problem Solvers Caucus who have a set of demands for her first, and incoming freshman Democrats from conservative districts who pledged not to vote for Pelosi during their campaigns.

On the other side of Capitol Hill, however, Senate Democrats spent no time debating. Sen. Chuck Schumer (D-NY) was reconfirmed as Senate Minority Leader by acclamation on Wednesday morning.

Which raises the question: Why? Why is Pelosi facing a revolt, while Schumer is coasting into another two years of party leadership with no objections?

Under Pelosi's tenure as Speaker, Congress enjoyed its most legislatively productive session since the Lyndon Johnson administration. In addition to the Affordable Care Act, Pelosi passed the most significant reform of Wall Street since the New Deal, a $700 billion stimulus and public works program that prevented a second Great Depression, and massive expansions of gay rights and workplace rights for women. There were many more bills Pelosi got through the House that died in the Senate, including a second jobs bill, the DREAM Act, a sweeping carbon emissions reform bill, and a bill to make it easier for workers to unionize. She was relentlessly disciplined, whipping votes one by one from Democrats who were afraid it would cost them their jobs.

She kept her caucus in line against President George W. Bush's plan to privatize Social Security in 2005. She managed to make it very hard for House Speaker Paul Ryan to pass Obamacare repeal. She delivered the longest-ever speech on the House floor in defense of young immigrants. And through all of this, she has been one of the House's most prolific fundraisers — in the last cycle she raised over $91 million for House Democrats.

Schumer, by contrast, has had a much more mixed record in the Senate, despite the fact that the minority caucus in the Senate inherently has more power than that in the House.

He did hold the line against health care repeal and tax cuts for the ultra-wealthy. But he inexplicably traded away several judgeships to the Republicans for no reason, and threw away Senate Democrats' upper hand in the fight to secure protections for Dreamers last January. Schumer has also been out of step with the party on policy — he previously opposed the Iran nuclear deal, and supported Trump's decision to move the Israeli embassy, even as it shattered international consensus and flared tensions in the region. And he has eschewed the idea of changing Senate rules to prevent GOP obstruction if he ever becomes Majority Leader, essentially ensuring a future Democratic president will be hamstrung the way President Barack Obama was for much of his tenure.

All things considered, it is a poor look for the Democratic Party that even within its own ranks, after a year that saw a flood of new women entering their caucus, a massively accomplished and talented woman has to justify her ongoing existence, while in the opposite chamber a man with a far patchier record was treated as entitled to his office.