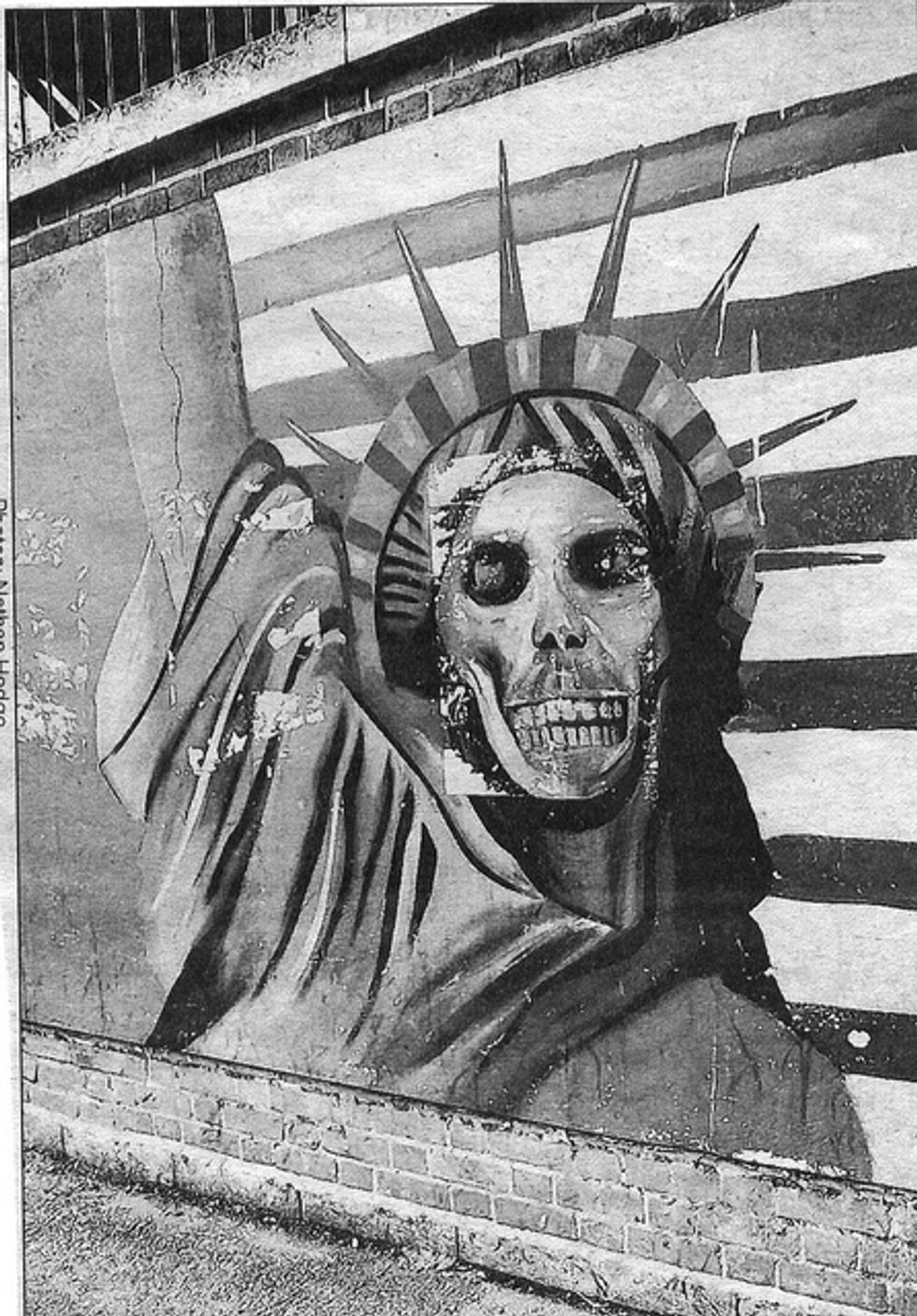 The World Wants the U.S. to End Its Blockade on Cuba

Last week, the United Nations General Assembly voted overwhelmingly to condemn the U.S. embargo against Cuba. 189 member-nations of the world said that Cuba does not deserve this embargo, which began in 1961 and has continued—unabated—to this day. Only two countries—the United States and Israel—voted against the motion. No country abstained.

Cuba’s minister for foreign affairs, Bruno Eduardo RodrÃ­guez Parrilla, said that the U.S. embargo has cost the small socialist island state upwards of $933.678 billion, with the losses in the past year amounting to $4.3 billion (twice the amount of foreign direct investment into the island). This embargo, RodrÃ­guez Parrilla said as he put the resolution forward, is an “act of genocide” against the island and its people.

The Group of 77 and the Non-Aligned Movement—both important groupings of the Global South—as well as regional groupings from Africa to Latin America backed the resolution. China’s representative to the UN, Ma Zhaoxu, made the case that the U.S. embargo on Cuba prevented the island from meeting its obligations to the UN Sustainable Development Goals.

Last year, the United States strengthened the embargo with an attack on the tourism sector (83 hotels were placed on the banned list). It is likely that the Trump administration will deepen its assault on Cuba.

Threats by the United States did not convert the vote of otherwise reliable U.S. allies. Each year since 1992 a resolution of this kind has come before the UN General Assembly. Each year the world has overwhelmingly voted against the U.S. embargo. This year was no different.

The World Is Worried About the United States

You don’t need a Pew poll to know which way the world thinks.

But it is useful. Last month, Pew Research Center released a poll that looked at the image of Donald Trump and the United States in 25 countries around the world. In most countries, neither Trump nor the United States come off well. Seventy percent of the populations in these countries have no confidence in Trump. The same number of people believe that the United States does not take the interests of other countries into consideration when moving policies forward. This is evident with the U.S. embargo on Cuba.

Beyond the Pew poll, it is evident from the atmosphere in the United Nations that the countries of the world—even close U.S. allies—fear U.S. policy on a number of issues. Cuba is a canary in the coal mine. But even clearer is the U.S. policy of ramping up sanctions against Iran.

The World Does Not Want to Strangle Iran

At the debate over the U.S. embargo on Cuba, Iran’s representative to the UN—Gholamali Khoshroo—detailed how the U.S. has withdrawn from several international agreements and how the U.S. has failed to implement UN Security Council resolutions that it does not like. Behind Khoshroo’s comments lay the U.S. withdrawal from the 2015 nuclear deal agreed upon by Iran and the UN Security Council members, the United Nations and the European Union. This deal was sanctified by a UN Security Council resolution. Trump’s unilateral move to scuttle the nuclear deal and the return of sanctions against Iran this week replicates—Khoshroo intimated—the long-standing and unpopular sanctions against Cuba. The United States, Khoshroo said, should “sincerely apologize” to the people of Cuba and Iran.

As the new U.S. sanctions regime went into place against Iran, Turkish president Recep Tayyip Erdogan told reporters in Ankara, “U.S. sanctions on Iran are wrong. For us, they are steps aimed at unbalancing the world. We don’t want to live in an imperialist world.” Erdogan is not alone here. Even countries with close ties to the United States—such as India and Japan—are against the sanctions. They may not use words like “imperialist,” but their actions clearly bristle at the heavy-handedness of the U.S. government when it comes to its use of instruments such as financial sanctions.

It was clear that China was never going to honor the new U.S. sanctions on Iran. Nor were Turkey and Iraq, and nor were the three large economies of Asia that rely on Iranian oil (India, Japan and South Korea). No wonder that the United States gave these countries waivers to the sanctions. These countries—including India and Japan—have been discussing the need for an alternative financial system so that they can do trade with countries that are sanctioned by the United States. They do not believe that the United States should be allowed to suffocate world trade through its control over banking systems and through the world’s reliance upon the dollar. Pressure to build alternatives no longer comes from the margins; it comes from Tokyo and New Delhi, from Frankfurt and Seoul.

One major casualty of the U.S. sanctions on Iran will be Afghanistan, already ripped apart by almost two decades of war. Afghanistan relies upon Iranian oil and—during this year—non-oil trade rose by 30 percent. India’s project to help build the port in Chabahar is linked to opening new land routes into Afghanistan. Just as the U.S. sanctions went into place against Iran, Ahmad Reshad Popal, director general of Afghanistan’s Customs Department, opened the Farah crossing to Iranian goods—a snub to U.S. policy. Even Afghanistan, virtually under U.S. occupation, cannot abide by the U.S. policy on Iran. Nor even can the NATO troops, whose trucks are fueled—in part—by Iranian oil.

The World Does Not Want an Iraq War in South America

Donald Trump has now come up with a new term—“troika of tyranny,” which includes Cuba, Nicaragua and Venezuela. In Miami, Trump’s close adviser John Bolton gave a speech where he inaugurated this term. He spoke of the right-wing turn in Latin America and the isolation—as far as he was concerned—of socialist governments. Bolton celebrated the election of men such as Jair Bolsonaro (Brazil) and Ivan Duque (Colombia), men who he said are committed to “free-market principles and open, transparent, and accountable governance.” No mention here of the grotesque views of Bolsonaro or the militarism of both men.

Bolton called the leaders of Cuba, Nicaragua and Venezuela “strongmen.” There is no more “clownish, pitiful” figure—to borrow from Bolton—than Bolsonaro, no more authoritarian heads of government than Bolsonaro, Duque and Trump. Duque has taken Colombia into NATO, a sign that the Colombian military will now answer more to Washington than to the Colombian people.

In his speech, Bolton threatened the governments in Cuba, Nicaragua and Venezuela. Trump’s administration, he said, “is taking direct action against all three regimes”—“direct action” a key phrase here.

Such actions against these countries are not new.

United States Marines entered Nicaragua in 1909 and occupied the country till 1933. When the Marines left, the national liberation forces under Augusto CÃ©sar Sandino attempted to free the country. Sandino was assassinated, and a U.S.-backed dictatorship by the Somoza family ruled the country till 1979. That year, the Sandinistas—named after Sandino—overthrew the dictatorship. In response, the U.S. funded the Contras (short form for counter-revolutionary forces), who prosecuted a bloody war against the small country.

Ever since Hugo Chavez came to power in Venezuela, the U.S. has tried to overthrow the Bolivarian revolution that he inaugurated. A failed coup in 2002 was followed up by various forms of intimidation and sanctions. In 2015, U.S. President Barack Obama declared that Venezuela was an “extraordinary threat to U.S. security” and slapped sanctions on the country. It is this policy that Trump has since continued.

Itchy fingers in the Trump administration are eager to start a shooting war somewhere in South America—either Cuba, Nicaragua or Venezuela. The appetite for this is not there in the United Nations. Nor is it shared in Latin America. But that has never stopped the United States.

Disregard for world opinion as well as the opinion of the U.S. citizenry defines the U.S. government. Thirty-six million people around the world, half a million of them in New York City, protested on February 15, 2003, to prevent the U.S. war on Iraq. George W. Bush did not pay attention to them. Nor will Trump.