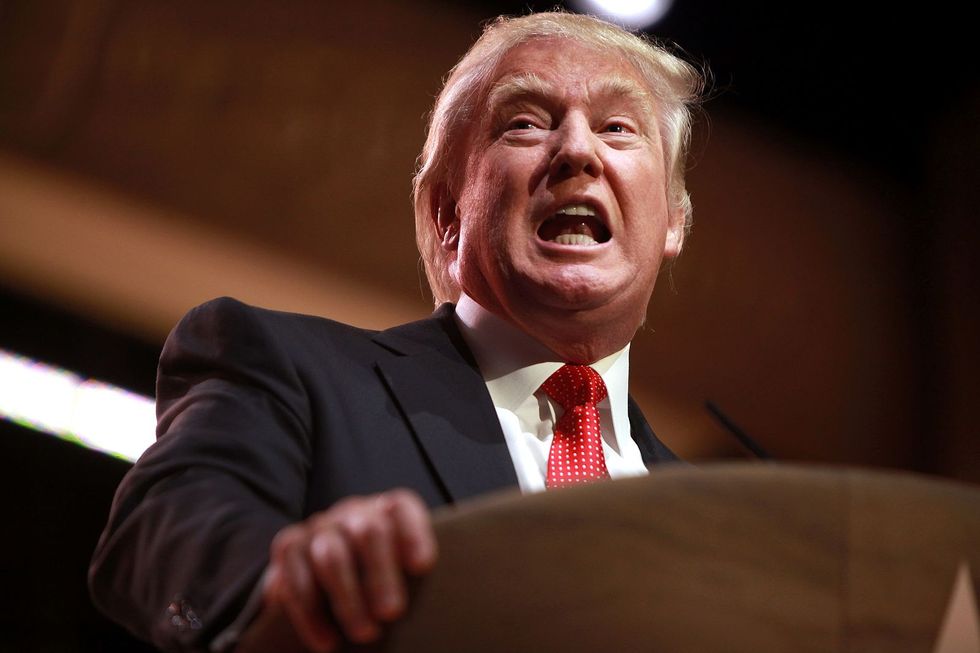 During one his recent barnburner speeches campaigning for fellow Democrats, former President Barack Obama cited a perfect example of why it is difficult to believe anything that President Donald Trump has to say. Trump had recently promised that Republicans in Congress would be delivering a new 10% middle class tax cut before the 2018 midterms, claiming that Rep. Kevin Brady (chairman of the House Ways and Means Committee) was hard at work on such a bill. Problem: Congress wasn’t even in session.

Citing Trump’s fictional pre-midterms tax cut as an example, Obama told a cheering crowd in Milwaukee that Trump wasn’t merely exaggerating—he was “just blatantly, repeatedly, baldly, shamelessly lying” and “just making stuff up.” Obama elaborated, “The president said he was going to pass a middle class tax cut before the election. Congress isn’t even in session before the election.”

But the president’s fabrications go well beyond his false promise of a 10% tax cut for the middle class before Election Day. Here are some of President Trump’s biggest fabrications of recent weeks—or as Barack Obama would say, blatant and shameless lies.

Trump has claimed that the caravan of Honduran refugees that originated in Pedro San Sula, Honduras and has been making its way north includes large numbers of Middle Easterners, implying that Islamist terrorist organizations are planning to use the caravan to gain entry to the U.S. But he has never offered a shred of proof of that claim, and when Trump was pressed by CNN’s Jim Acosta, he admitted to having “no proof.”

3. Trump Claims That Honduran Caravan is Full of Gang Members

Trump has claimed that members of MS-13 (one of Central American’s most violent street gangs) have been joining the Honduran caravan in large numbers. On October 29, Trump visited Twitter and posted, “Many Gang Members and some very bad people are mixed into the Caravan heading to our Southern Border.” But in fact, one of the main reasons the caravan exists in the first place is that refugees are trying to get away from gang violence—not promote it.

With a long list of Democratic candidates campaigning so aggressively on health care in the 2018 midterms, Trump and many other Republicans have been claiming that protecting coverage for Americans with preexisting health conditions is a high priority for the GOP. On October 31, Trump posted on Twitter that “Republicans will protect people with preexisting conditions far better than the Dems.” But as Obama asserted during his late October speech in Milwaukee, it’s best to judge Republicans by what they do rather than what they say.

Obama told the crowd, “They all say they’re going to protect your preexisting conditions; the current Justice Department is in court right now trying to strike those protections down. So that’s not spin, that’s not exaggeration—that’s just lying.”

5. Trump Claims That ‘Many Presidents,’ Unlike Himself, Haven’t Nominated Supreme Court Justices

During an October 24 speech in Mosinee, Wisconsin, Trump tried to depict himself as uniquely successful in his ability to appoint Supreme Court justices. Trump told the crowd, “Many presidents don’t get a chance to put a Supreme Court justice on. Here we are, less than two years, and we put two of them on.” But as Politifact.com pointed out, the last U.S. president who didn’t appoint any Supreme Court justices was Jimmy Carter (who was elected in 1976 and voted out of office in 1980). Every president who was elected after Carter—including Ronald Reagan, George H.W. Bush, Bill Clinton, George W. Bush and Barack Obama—appointed at least two (Reagan appointed three: Sandra Day O’Connor, Antonin Scalia and Anthony Kennedy). So Trump’s claim that he is somehow unique in his ability to appoint Supreme Court justices is nonsense.