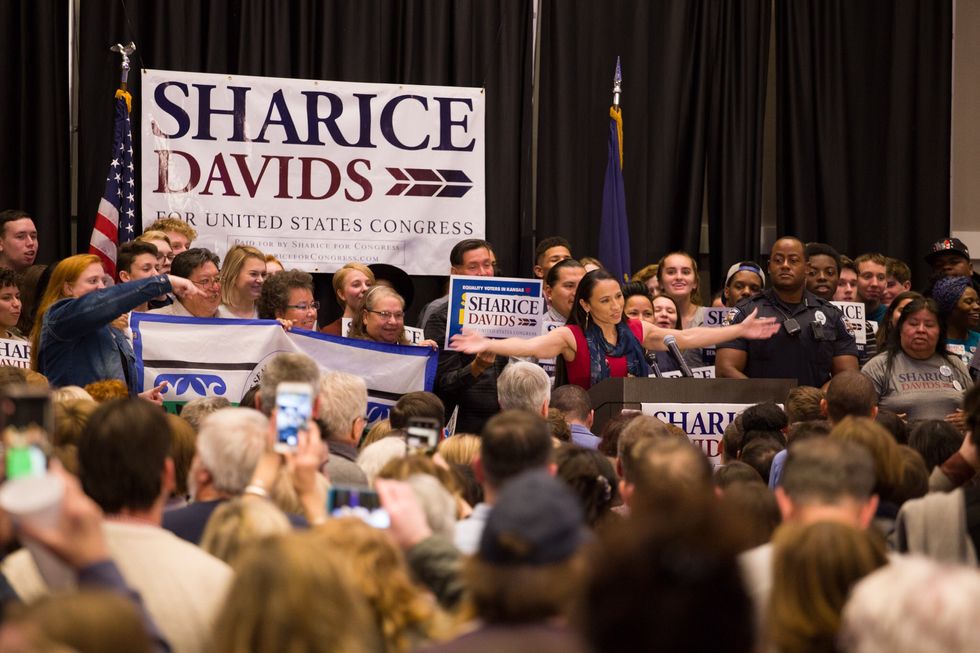 But that wave doesn’t mean the anti-democratic features of America’s electoral process didn’t kick in, to say nothing of a catalog of intentional partisan obstructions to voting in a handful of states—led by Georgia, where it may take days for all the paper mail-in and provisional ballots to be validated and counted. When those totals are added in, there may be a run-off gubernatorial election in early December.

The first affirmation of the wave was the volume of voters. As millions of votes are still being counted (in states like California), the votes cast so far total approximately 100 million, with experts estimating that figure will reach 111 million—a 47.3 percent national turnout. That is the first 100-million voter midterm, and the highest turnout since 1970, according to the University of Florida’s Michael McDonald.

Back to the false assertion that this isn’t a blue wave. Even as the final numbers have yet to be certified by state election officials—and won’t be for days or weeks—Democratic candidates won the popular vote for House and Senate races. As of Wednesday morning, the New York Times’ live (and therefore slowly updating) dashboard of results showed there were 4 million more votes for Democratic House candidates and 12.1 million more votes for Democratic Senate candidates. That’s a blue wave by any fact-based measure.

Why didn’t the Democrats win more widely—taking back a full congressional majority and not just the U.S. House? The answer is because each state has two U.S. senators, regardless of its population. That blame lies with the country’s founders and the structure of federal representative government.

The Democrats also won more widely, and with long-lasting impacts in a series of key states—just as the GOP solidified their hold in some regions, namely the lower Midwest—but Democratic disappointments surrounding the most emotionally compelling contests eclipsed their victories elsewhere. The biggest disappointments center around the vision of a “new South,” where there was great hope that Florida’s Andrew Gillum would be elected governor (he lost by fewer than 60,000 votes out of 8 million cast); that Texas’ Beto O’Rourke would be elected to a Senate seat (he lost by 115,000 votes out of 8.3 million cast); and that Georgia’s Stacey Abrams would be elected governor—where the absentee and provisional ballot counting continues. (The contest’s current leader, Republican Brian Kemp, is fewer than 20,000 votes above the 50 percent threshold, which, if not cleared, triggers an early December recount.)

These three marquee contests were all emotional races for Democrats, portending the repudiation of President Trump’s divisive leadership in one of the fastest-growing and most racially diverse regions of the country. In fact, both Gillum and O’Rourke achieved what was unthinkable for Democrats in their states. O’Rourke won 48.3 percent of the vote in Texas; several points more than President Obama’s peak. And Gillum was the first Democratic gubernatorial candidate in Florida to be ahead in the polls in decades. Their respective votes show how close those purple states are to tipping points; but the converse also remains true—that vast swaths of these states, from rural areas to suburbia, are deeply conservative.

Still, Florida’s biggest electoral bonanza is one that was not widely featured in election night returns but will almost certainly push the state from purple to blue in coming years. The voters passed a constitutional amendment to re-enfranchise an estimated 1.6 million felons who lost their voting rights when convicted. Florida’s ex-felon voting ban was a holdover from the racist Jim Crow and affected more voters than any other state. There will now be efforts to enroll them as voters, where, had they participated in the 2018 midterms, the state’s next governor and many legislative seats would have been in blue hands.

There were other significant Democratic victories that, like re-enfranchising Florida’s ex-felons, will resonate in the 2020s. These victories concern aspects of the redistricting process, where, unlike 2011’s GOP extreme gerrymandering, Democrats or citizens commissions (which are fairer-minded) will be in place to counterbalance aggressive Republican moves to draw districts that favor an increasingly minority political party.

The biggest redistricting-related victories come from Democrats who were elected governor in formerly red states that play outsized roles in presidential and House elections. Those blue gubernatorial victories were in Michigan, Wisconsin and Pennsylvania. (In contrast, Republicans won governorships in this decade’s GOP-gerrymandered states of Ohio and Florida—and it remains to be seen what happens in Georgia.) Democratic governors can wield veto pens if Republican-controlled legislatures sort voters by party to intentionally create unfair political maps.

Four states passed redistricting reforms. Independent commissions for congressional and legislative redistricting won in Colorado (Amendment Y and Amendment Z) and Michigan (Proposal 2), becoming the first east of the Rockies. Also, in Missouri, a state where the GOP has consolidated gains in recent years, Amendment 1 requires the use of a state demographer and fairness formulas when drawing maps. And in Utah, Proposition 4 also establishes an independent redistricting commission.

There were other signs that Democrats were making inroads in previously red states. In Kansas, the anti-immigrant and vote-suppressing Secretary of State, Kris Kobach, was defeated for governor by Laura Kelly, and Kansans also elected Democrat Sharice Davids, a Native American and gay woman, to the House. Davids was one of many women elected on Tuesday, from governors to House members.

Stepping back from individual contests, historians and political scientists will see 2018’s midterms as a blue wave election that showed a steady realignment in the nation’s political landscape. Yes, the Senate will be filled by more Trump acolytes, making it more partisan and pushing the federal judiciary to the right for decades to come, as the GOP majority will continue to stack the federal courts with arch conservatives. However, from a popular vote perspective, that body is not representative of the national electorate.

But in the states, significant political shifts are underway. The GOP’s lock on the entire Midwest has been broken. Michigan, Wisconsin and Pennsylvania—the final three states that elected Trump—are returned to blue governors. In contrast, presidential bellwethers Ohio and Missouri are becoming more conservative.

However, it appears the biggest political shifts are underway in the Sun Belt border states. Florida is on the verge of becoming permanently purple, if not blue. Georgia may yet see a Democratic governor; but if not, its voting demographics are close to Florida’s. And even in Texas—and Arizona and Florida, where the counting continues in very tight U.S. Senate races where the GOP has small leads—blue voters are at tipping points with popular majorities in sight.

No party wins everything in an election. But the biggest shifts, based on popular votes, gubernatorial takeovers, electoral reforms with redistricting and felon re-enfranchisement, all affirm 2018’s midterm elections were indeed a blue wave year.