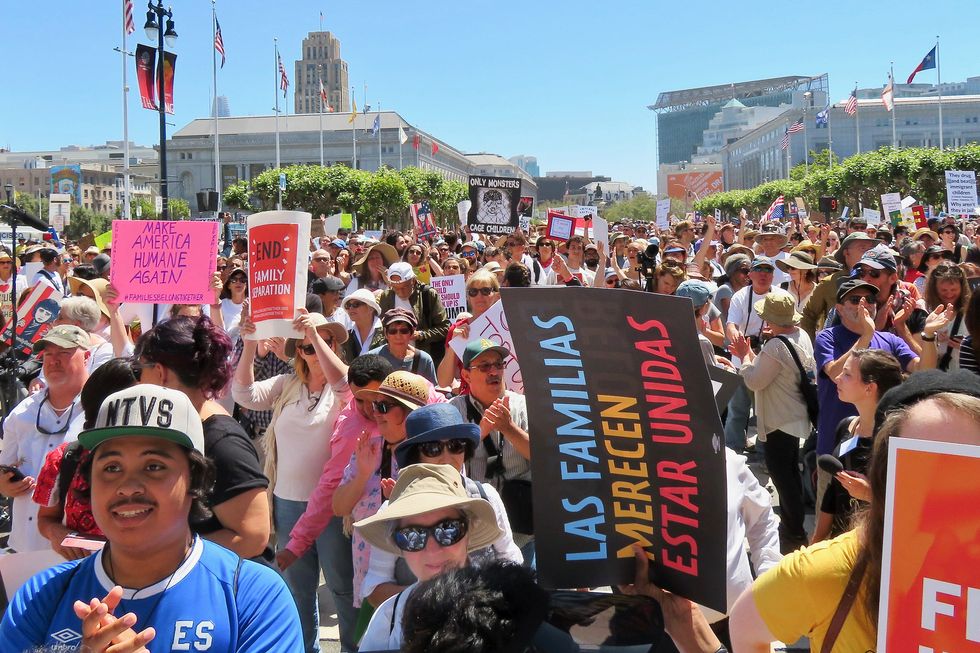 With the 2018 midterms days away, the blue voter tide is rising.

That’s according to state-reported numbers on people voting early, compared to 2014’s midterms. How high the blue wave will crest remains to be seen—not just for control of Congress and many state races, but for whether a governing mandate will emerge.

There are several trends those on the democracy beat will be tracking. Here they are:

As of Thursday night, the nation’s leading academic voter turnout tracker made it official: these midterms have entered uncharted territory. As the University of Florida’s Michael McDonald tweeted, “We’ve passed a milestone in that more people (28 million) have voted early in 2018 election (by any means: absentee, mail ballot, in-person) than voted early in 2014 across the entire nation (27 million).”

All of this puts Democrats in the big-picture lead, according to the most reliable polls—which are not single polls, but many polls that are averaged, and ask about generic party leanings. Real Clear Politics average of generic congressional candidates put Dems up by 7.5 percent. Of course, elections are local—not generic—and that’s why polls can miss.

So what shape are blue wave voters in? The answer is they appear to have a slight edge—but that’s not too far ahead in the most heavily policed voting locales. Why not? That 7.5 percent blue lead has positive and worrisome elements.

On the positive side, that lead is on top of the partisan edge created in most heavily gerrymandered districts (U.S. House and state legislatures). That’s because pollsters are looking at the finish line popular vote, not the starting line advantages or disadvantages; where gerrymanders slice and dice the electorate when drawing districts. This fall is apparently seeing lots of people, not just registered Democrats, vote blue.

But on the worrisome or deflating side, the 7.5 percent lead does not include the impact of strict voter ID laws, which can undermine turnout at the finish line by 2-to-3 percent. Nor do they include the impacts of purging infrequent voters or disqualifying ballots for technical reasons, both of which are GOP power plays in some states and may peel off another point or two. So the bottom line here is every vote matters—not just to achieve winning popular votes, but to achieve genuine governing mandates.

2. How Many New Governors?

While most eyes and ears—and newscasters—are talking about the president and control of the U.S. House (the Dems need to pick up 23 seats to retake the majority) and Senate, term limits have led to more open governor’s seats in for the first time in many years.

There are important races with national implications in Florida, Georgia, Ohio and Michigan, where, it appears, according to those averaged polls, that Democrats stand good chances of winning in these otherwise purple states that are presidential election battlegrounds. But that’s not the only reason these governor’s races are key.

These states, which have been dominated by gerrymandered Republican-run state legislatures and U.S. House delegations, have been in the forefront of litigation to challenge reproductive rights, climate change policy, health care safety nets, same-sex marriage and LGBT rights, and other progressive policies.

While it is not likely that 2018’s wave will completely change the political complexion of these red-run states, electing Democratic governors will mean that new gerrymandered political maps in 2021 will face veto pens. Such potential vetoes mean that the 2020s decade would not be as driven by the same partisans as experienced in the 2010s.

The most important ballot measure question on the November ballots arguably is in the Sunshine State, where roughly 10 percent of its voting-age population are ex-felons who have served their sentences—but lost their right to vote under state law. This fall’s ballot measure would restore voting rights to 1.5 million Floridians, which is a political game-changer that could turn Florida from a purple state to a politically blue state for years. However, the measure needs 60 percent voter approval to pass, which is a high bar.

In the governor’s race, polling averages on Friday put the Democratic gubernatorial candidate, Andrew Gillum, ahead by 2.7 percent, a smaller margin than just a week ago. While it is a bit of an apples to oranges comparison, that polling snapshot suggests that the re-enfranchisement proposal needs a large last-minute surge to pass.

The tricks of the voter suppression trade are well-known, and there has been no shortage of coverage of 2018’s worst offenders—lead by Georgia and North Dakota. (There are other less-covered examples in Arizona, Missouri, Indiana and Kansas.) In all these states, Republicans have turned voter registration and ballot-verifying technicalities into reasons to bar likely Democrats from participating.

Those tactics involved not promptly processing voter registration information, taking infrequent voters off of statewide voter rolls, rejecting mail-in ballots based on how a person signs the envelope and designing voter ID requirements that intentionally are harder for Native Americans to satisfy. The good news here is that local voting rights legal defense groups are watching, are organized and are helping people get past hurdles.

The open question is whether these bureaucratic barriers will impede a larger class of voters—as they are made to wait in line while unsuspecting individuals who find they are not being given a regular ballot interact with poll workers and end up casting provisional ballots (which need further certification before being counted). At this stage in the voting wars, the suppressive tactics and legal remedies are known. They question is to what degree will they come into play on Tuesday.

Put another way, the question is will the Russians—or any domestic cyber-warrior—somehow sabotage the information systems that are used to check in voters and then tally their ballots?

In 2016, Russian intelligence agents hacked into Illinois’ state voter registration database, but didn’t scramble the names and addresses and precinct assignments—the fear there, as that could lead to great frustration and chaos at polling places. Russians did not get near the systems counting votes, according to every congressional and intelligence agency inquiry. But the Illinois breach has made cyber security a priority in elections as never before (arguably bringing it in line to where it should have always been.)

Experts tracking cyber threats to voting say the public should be confident. As David Becker, executive director and founder of the Center for Election Innovation & Research, wrote in the Washington Post, “Russia’s efforts have driven an unprecedented response from federal, state and local officials charged with securing our election systems. Time and time again, secretaries of state and state election directors from both parties have made clear that while the threat to our elections is real, they are singularly focused on and prepared to address it in 2018 and beyond.”

Becker is in a position to know what states and counties are doing. While one maxim in the cyber-security world is one should never say never, it is more likely than not voting will not be disrupted by outsiders. That is not to say that there won’t be machinery snafus and other glitches that occur every election, especially as the nation’s fleet of voting machines is well past what’s considered old age for computers.

The biggest question heading into Tuesday’s finale of the 2018 midterm-voting season is will Democrats see a blue wave or a blue mandate?

The two are not the same. It’s likely the results will be very close in some key races, just as there are likely to be Democratic blowouts and GOP-winning surprises elsewhere. But overall, the foremost question is whether the voters will act with enough collective clout to send a message that the nation’s political agenda and culture must change. That’s what most Americans will be watching for on Tuesday once the results are in.