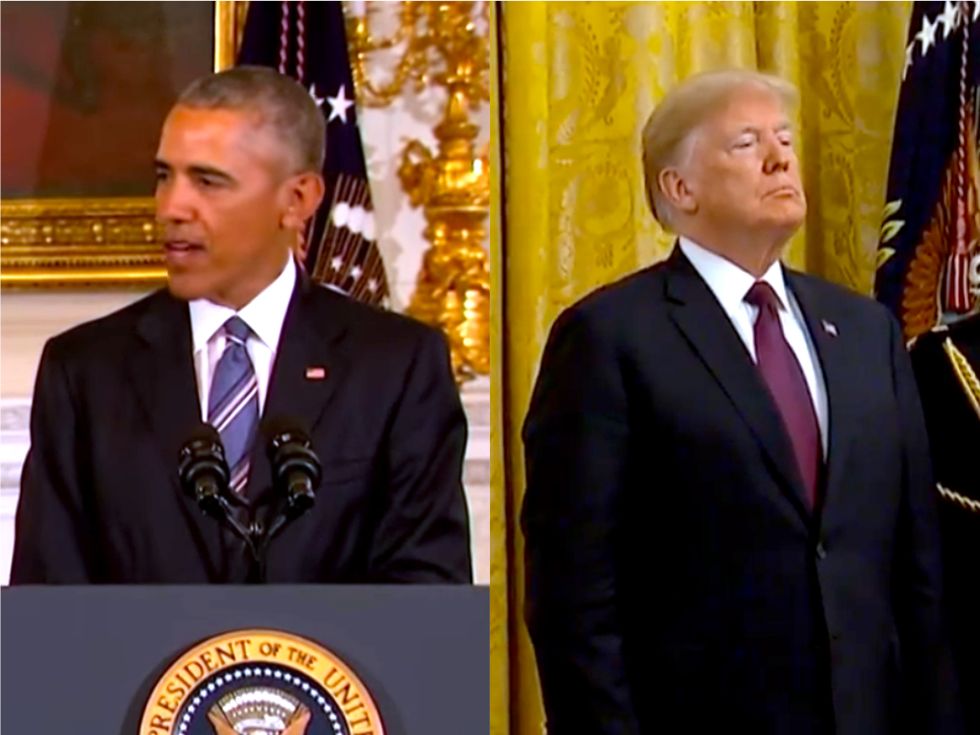 These ceremonies, which normally occur once or twice per year, provide Americans with an opportunity to celebrate the achievements of various people who have made an important contribution to U.S. culture. Because the president selects recipients with total discretion â€“ American or otherwise, living or dead â€“- this award also says a lot about the president himself.

What achievements or contributions does the president consider important? What groups of people most easily win his favor? And how does he hope to shape his legacy, judging by the company that he chooses to keep?

To find out, weâ€™ve analyzed every Presidential Medal of Freedom ever awarded, and the presidents who awarded them â€“ including Trump.

What is the Presidential Medal of Freedom?

The award was established by President John F. Kennedy, in 1963, to recognize â€œany person who has made an especially meritorious contribution to (1) the security or national interests of the United States, or (2) world peace, or (3) cultural or other significant public or private endeavors.â€

As a unilateral power of the executive branch, presidents have broad discretion to choose recipients. But presidents often use the award for political purposes â€“ to gain positive media attention, shape their legacy or reward their supporters.

Our research shows that the politicization of the medal has increased over time. Before 1981, Presidential Medal of Freedom ceremonies were sporadic, and recognized only about five recipients at a time.

This changed when President Ronald Reagan â€“ a media-savvy, former Hollywood actor â€“ began hosting large ceremonies designed to maximize public attention. President Barack Obama has since raised the bar. In 2016, he awarded 20 medals to recipients including athletes like Michael Jordan and entertainers like Bruce Springsteen. In fact, Obama holds the record for awarding the most medals in total: 115. Thatâ€™s about 14 per year on average.

Who gets a medal?

Much of it depends on whether the president is a Democrat or a Republican, but this isnâ€™t always the case. For instance, presidents from both parties often pick politicians and public servants.

We also see clear partisan differences. For instance, Democratic presidents are more likely to award the Presidential Medal of Freedom to civil rights leaders, labor organizers and people of color. Republicans are more likely to bestow the medal on military leaders, white people and conservative editors and pundits. In other words, presidents tend to award Presidential Medals of Freedom to members of their partyâ€™s key constituency groups.

President Trumpâ€™s first round of medals is unusual in at least one respect: He waited 20 months to award them, longer than any other president. This is surprising for a president who enjoys commanding the mediaâ€™s attention and exercising unilateral executive power.

Trumpâ€™s seven selections include three athletes and three posthumous awards â€“ well above the mark for past recipients, 5 percent of whom were athletes and 10 percent recognized posthumously. One of these is baseball great Babe Ruth, who died 70 years ago, in 1948.

Trumpâ€™s selections also differ markedly from those of his predecessor, Barack Obama. Whereas Obama selected the most diverse set of recipients to date â€“ 36 percent of whom were women, and 39 percent people of color â€“ Trump has selected six men and six white people, out of seven recipients.

And while Trumpâ€™s selection of Miriam Adelson â€“ a doctor, philanthropist and, perhaps most importantly, a GOP mega-donor â€“ has been controversial, he is hardly the first president to award the nationâ€™s highest civilian honor to a prominent political supporter. Obama, for one, awarded the medal to Oprah Winfrey â€“ who gave him a key endorsement in the 2008 primaries. He also awarded it to Democratic activists such as Barbra Streisand and Bruce Springsteen. But the sheer size and scope of Adelsonâ€™s political contributions - more than US$113 million in combination with her husband, Sheldon â€“ differentiates her from past recipients.

Who will Trump pick next?

Trumpâ€™s future selections will tell us even more about who he is and what legacy he wants to leave as president. In fact, if these first awards are any indication, Trump might use his medal selections to associate himself with cultural icons not yet claimed by other presidents - as he did by picking Elvis this year.

If Donald Trumpâ€™s mission is to â€œMake America Great Again,â€ the Presidential Medal of Freedom may be our best indication of what greatness looks like to him.