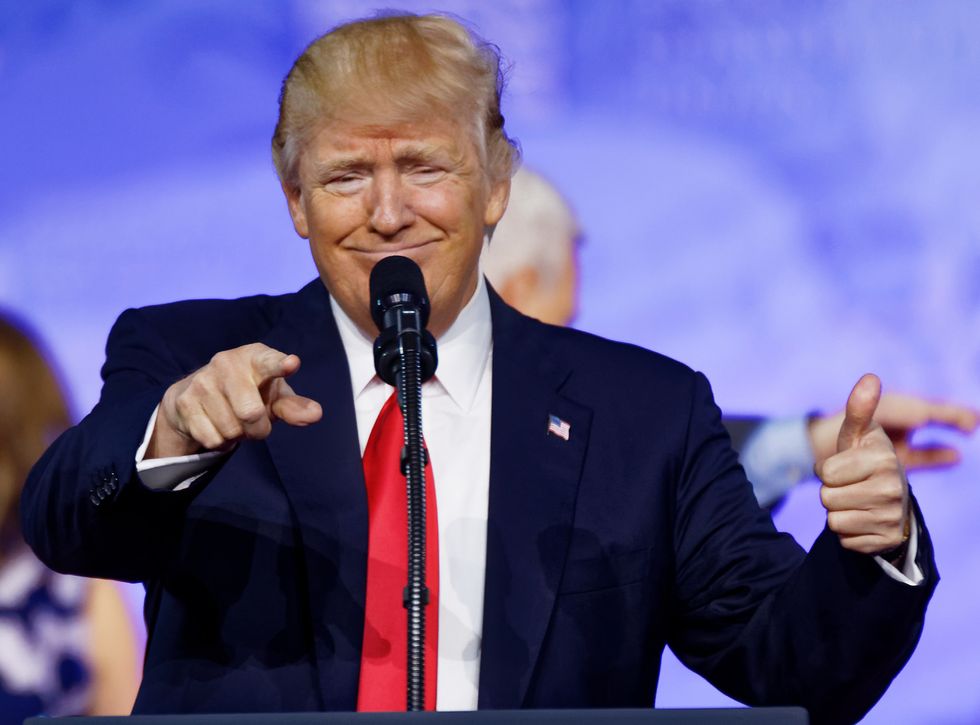 The week before the 2018 midterms, President Donald Trump has been going out of his way to rally his far-right base with a large dose of anti-Latino, anti-immigrant bigotry—from hysterical fear-mongering over a caravan of Honduran refugees that has been making its way north to promising to end birthright citizenship to a blatantly racist anti-Democrat ad that is being compared to the infamous Willie Horton ad of 1988.

The ad shows convicted cop killer Luis Bracamontes, an illegal immigrant who has been sentenced to death, in a Sacramento courtroom smiling as he brags about killing law enforcement officers. Text appears on the screen, ominously declaring, “Illegal immigrant Luis Bracamontes killed our people. Democrats let him into our country. Democrats let him stay.” The ad is not only offensive—it is also deceptive and misleading, as George W. Bush was president when Bracamontes last entered the United States.

Not surprisingly, Democrats have been quick to criticize Trump for all his anti-Latino hysteria. But some of the criticism has come from Republicans as well. And in Florida—where many Cuban-Americans have leaned GOP over the years—right-wing Latino Republicans have been grappling with the 2018 midterms as Trump’s racism goes from bad to worse.

On the right, one of the most vehement denunciations of the ad came from Havana-born Al Cardenas, former chairman of the Florida GOP. Cardenas, who served as a senior advisor for former Florida Gov. Jeb Bush’s 2016 presidential campaign, lambasted Trump via Twitter with the following  November 1 post: “You are a despicable divider; the worse social poison to afflict our country in decades. This ad, and your full approval of it, will condemn you and your bigoted legacy forever in the annals of America’s history books.”

Republican Rep. Carlos Curbelo, who is seeking reelection to the U.S. House of Representatives via his district in Miami, has criticized the ad as well—describing it during a CNN interview as “definitely part of a divide and conquer strategy that a lot of politicians, including the president, have used successfully in the past. I hope this doesn’t work.”

Cardenas, unlike Curbelo, is not a NeverTrump Republican. When Spain’s El PaÃ­s interviewed Cardenas in 2016, he described himself as a reluctant Trump voter and explained that he voted for Trump with “many reservations” and felt a sense of “party loyalty.” But if Cardenas’ recent anti-Trump comments are any indication, he probably won’t be voting for him in 2020—regardless of “party loyalty.” And “party loyalty” has never prevented CNN contributor Ana Navarro (a native of Nicaragua) or Havana-born Rep. Ileana Ros-Lehtinen from being adamantly anti-Trump.

Ros-Lehtinen, now 66, has been a fixture in right-wing Florida Latino politics, entering the U.S. House of Representatives in 1989. But Ros-Lehtinen, a NeverTrump Republican, isn’t seeking reelection this year—and as she sees it, Trump has been terrible for the GOP. Navarro agrees; although the 46-year-old GOP strategist and NeverTrump Republican was a John McCain/Jeb Bush advisor in the past, her disdain for Trump was so vehement in 2016 that she voted for Hillary Clinton.

Curbelo has not only criticized Trump recently for the Bracamontes ad but also for his vow to end birthright citizenship. The 14th Amendment to the U.S. Constitution, Curbelo has stressed, clearly offers citizenship to children born on U.S. soil—and Trump doesn’t have the power to end a constitutional amendment with an executive order.

But while Ros-Lehtinen, Navarro and Curbelo are avowed NeverTrump Republicans and Cardenas has been calling the president out recently, Trump has his share of Latino supporters in Florida—although some of them are flip-floppers rather than true believers. Take Florida State Rep. Jeanette NÃºÃ±ez, for example.

Back in 2016, the Miami-born Cuban-American Republican tweeted, “Wake up, Florida voters; Trump is the biggest con man there is.” But in 2018, NÃºÃ±ez is the running mate of Trump worshipper and Florida GOP gubernatorial candidate Ron DeSantis, who is in a close, tight race with Tallahassee Mayor Andrew Gillum (the Democratic nominee). DeSantis, with his white nationalist rhetoric, is an obvious racist. But having NÃºÃ±ez on the ticket was obviously an attempt to make DeSantis appear less bigoted. And she has deleted her anti-Trump tweet of 2016, now declaring herself to be a Trump supporter.

Similarly, there was very bad blood between Sen. Marco Rubio and Trump in 2016. But in 2017 and 2018, Rubio has generally been very submissive where President Trump is concerned.

In Florida, changing Latino demographics could affect the GOP as well. Florida’s huge Latino population was predominantly Cuban in the past, and anti-Castro Cuban refugees have a long history of voting Republican. But in 2018, Florida has a lot more non-Cuban Latinos than it did 30 or 40 years ago—from Puerto Ricans and Dominicans to Mexicans. According to Pew Research, 29% of Florida’s Hispanic population was of Cuban origin in 2011. And politically, that’s a huge development because non-Cuban Latinos, on the whole, are more likely to lean Democratic. In Miami’s Little Havana community, most voters were reliably Republican in the 1970s—but not anymore.

Increasingly, Latinos in Florida are registering as Democrats. The Florida GOP needs more Latinos to register as Republicans, but there’s a problem: his name is Donald J. Trump. And as Navarro, Ros-Lehtinen and Carbelo have been demonstrating, some Latino Republicans in the Sunshine State are fed up with the president’s nonstop bigotry and xenophobia.