Here are 5 of the most ridiculous, buffoonish things Rush Limbaugh has said about Robert Mueller’s investigation 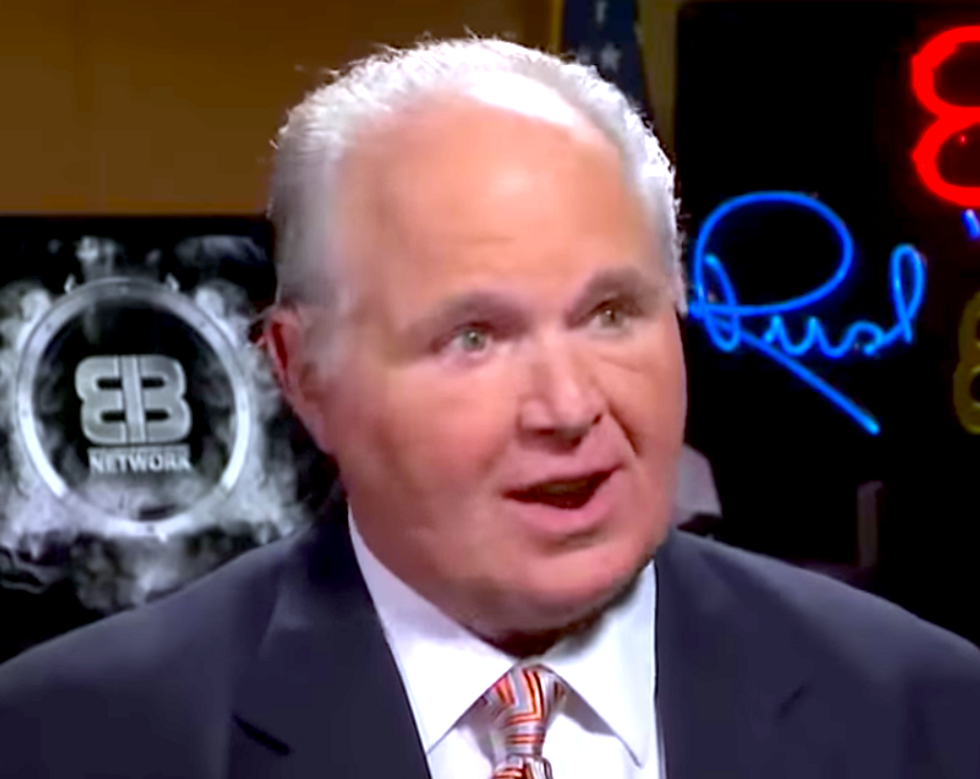 In the early 1990s, AM talk radio star Rush Limbaugh was very critical of Republican Patrick Buchanan’s protectionist, isolationist “America first” agenda. But now that President Donald Trump is promoting that same type of agenda, Limbaugh is one of Trump’s leading carnival barkers—and that includes jumping through hoops to defame the Russia-related investigation of Special Counsel Robert Mueller. Limbaugh has made one ridiculous comment after another about Mueller’s probe, trying to paint the special counsel as a shameless tool of the Democratic Party despite his numerous GOP connections.

But then, Limbaugh has always had his contradictions. Limbaugh, infamously, had a major addiction to OxyContin in 2003 when he was still ranting and raving in favor of the War on Drugs and draconian prison sentences for even minor drug offenses. Drug addicts, Limbaugh repeatedly insisted, were scum—and his army of gullible followers (called “Dittoheads”) didn’t see how much of a contradiction it was when he entered rehab for his OxyContin problem. Similarly, the Dittoheads of 2018 aren’t going to see how much of a contradiction it is that the same Rush Limbaugh who repeatedly called for in-depth investigations of President Bill Clinton in the 1990s considers Mueller’s probe to be frivolous.  In Limbaugh’s world, only Democratic presidents merit government scrutiny.

Here are five of the most ridiculous, buffoonish things Rush Limbaugh has had to say about Mueller’s investigation.

1. Limbaugh Believes Paul Manafort Is Being Punished for Being Truthful

Limbaugh has been claiming that the crimes of Trump’s former campaign manager, Paul Manafort, are irrelevant and that Mueller is simply grasping at straws by investigating him. On November 26, major media reported that Mueller had terminated Manafort’s plea deal on the grounds that Manafort has been repeatedly lying to federal investigators. But according to Limbaugh, Manafort is being persecuted for being truthful and forthcoming with Mueller’s office.

This week, Limbaugh asserted, “Manafort is said to have lied after reaching a plea deal with Mueller and his Trump-hating prosecutors—so that Manafort’s plea deal is now out the window, because what you do when you make a plea deal, you have to tell the truth about everything. And I don’t think Manafort’s been lying about anything. What Manafort’s refusing to do is to compose evidence, make it up.”

2. Limbaugh Described Jerome Corsi and Roger Stone as Irrelevant to the 2016 Presidential Election

According to Limbaugh, Mueller is grasping at straws by investigating the 2016 activities of author/conspiracy theorist Jerome Corsi and long-time Trump ally Roger Stone. Neither of them, Limbaugh insists, have any relevance whatsoever to the 2016 presidential race—and it’s silly for Mueller to even be speaking to them. Limbaugh stressed, “I don’t mean to be insulting of Corsi or Stone. But, my friends, these are not central players in the Trump Administration, in the Trump campaign. They’re not central players anywhere. Corsi is a journalist and an author, and Stone’s a political activist—and he’s been involved in campaigns. But he’s former, former, former this, former that….. I’m pointing out the fact that it’s no different than going after Minnie Mouse here, Mickey Mouse or whatever.”

Stone, however, is hardly obscure; Stone and Trump go way back, and Stone served as an informal advisor to Trump during the 2016 election. Trump wanted Stone’s advice and input in 2016. Corsi, meanwhile, is an extremist, but he’s a rock star on the alt-right—and Stone hardly considered him unimportant in 2016.

3. Limbaugh Claims Jerome Corsi Was ‘Set Up’ by Mueller

Describing Corsi’s interactions with Mueller’s team, Limbaugh ranted, “They ask him questions about e-mails related and unrelated to whatever they’re looking into. They leave the room, and then, they come back and they accuse him of lying to them and show him the e-mails from years ago from his laptop that they had. So they set him up.”

Limbaugh has a long history of painting Republicans who don’t toe the party line as closet Democrats—and he has repeatedly tried to paint Mueller as a Democratic Party operative. But Mueller is a long-time Republican; he was appointed by President George W. Bush to head the FBI in 2001, and Deputy Attorney General Rod Rosenstein (another Republican) appointed him special counsel for the U.S. Justice Department in 2017. Further, President Ronald Reagan—patron saint of the modern conservative movement—appointed Mueller as a U.S. attorney for Massachusetts in 1986. In other words, Mueller’s connection to the GOP goes way back.

But none of that matters to Limbaugh, who recently ranted, “What really galls me is that we keep hearing and have always heard about the integrity of Robert Mueller—you must be very careful criticizing Robert Mueller, Robert Mueller has served as the director of the FBI, served presidents of both parties, he’s perfectly nonpartisan. Blah, blah, blah, blah, blah. Open our mouths, and let them shovel it all in. And we happily chew away, and it’s all a crock.”

5. Limbaugh Assumes the Recent Guardian Article on Manafort’s Alleged Meetings with Julian Assange Is a Fabrication

On November 27, the Guardian reported that Manafort had secretly met with WikiLeaks’ Julian Assange during the 2016 presidential race (which Manafort denies). That allegation is hardly insignificant: Manafort was Trump’s campaign manager before Kellyanne Conway joined the campaign, and WikiLeaks published stolen e-mails of the Democratic National Committee (DNC) and Clinton’s campaign manager John Podesta—e-mails that, according to Mueller, were stolen by a Russian government official in Moscow. But to hear Limbaugh tell it, Manafort was only a marginal figure in Trump’s campaign—and Trump, predictably, was totally dismissive of the Guardian’s bombshell article.

After the article was published, Limbaugh asserted, “Well, well, well, if anybody doubts the political nature of the Mueller investigation, all you have to do is take a look at the news today. For crying out loud, they really want us to believe that Paul Manafort met with Julian Assange three times before WikiLeaks published the Podesta e-mails? Where’s this story been? If this were true, they would have known this all the way back when Obama and his buddies were spying on the Trump campaign.”