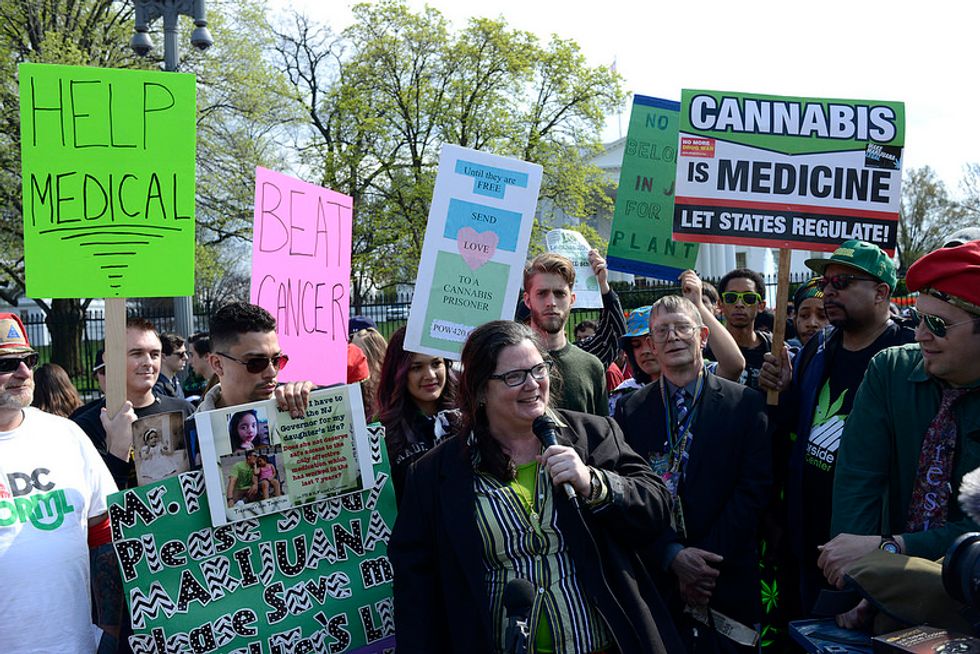 Michigan becomes the 10th state to legalize marijuana and the first one in the Midwest. With Missouri and Utah now joining the ranks, medical marijuana is now legal in 32 states.

In Michigan, the Proposal 1 legalization initiative was winning with 55.8 percent of the vote, with 96 percent of the vote counted as of Wednesday morning. The measure will legalize, regulate, and tax marijuana in Michigan for adults aged 21 and older. It allows for the possession of up to 2.5 ounces of marijuana and cultivation of up to 12 plants for personal use, while also establishing a legal framework for the licensing and regulation of marijuana businesses and products.

“The passage of Proposal 1 is a major milestone for marijuana policy reform in the U.S.,” said Matthew Schweich, deputy director of the Marijuana Policy Project (MPP) and campaign director for the Yes on 1 campaign. “Michigan will be the first state in the Midwest to end marijuana prohibition and replace it with a system in which marijuana is regulated for adult use. Adults will no longer be punished for consuming a substance less harmful than alcohol, and rather than having to resort to the illegal market, they will be able to access it safely and legally from licensed businesses. In addition to the public health and safety benefits associated with regulating marijuana, the state will have a significant new stream of tax revenue. Michigan is going to demonstrate that regulating marijuana works, and it will set a strong example for other states in the region and around the country.”

“Western and northeastern states have led the way on legalizing marijuana, but the victory in Michigan powerfully demonstrates the national reach of this movement,” said Maria McFarland SÃ¡nchez-Moreno, executive director of the Drug Policy Alliance (DPA), which through its lobbying arm, Drug Policy Action, helped fund and played a significant role in drafting the initiative. “With such overwhelming public support for marijuana legalization, even including majorities of Republicans and older Americans, there’s only so long that the federal government can continue to hold out.”

In the past decade, Michigan has seen more than 200,000 marijuana arrests, the vast majority (84 percent) for simple possession. Those arrests won’t be happening anymore.

In Missouri, two of three medical marijuana initiatives won. Amendment 3, which would have imposed a 15 percent tax and set up a research institute benefiting its author, was easily defeated, while Amendment 2 had 65.5 percent support, and Proposition C had 56.5 percent. Amendment 2 was backed by both MPP and DPA.

“Thanks to the unflagging efforts of patients and advocates, Missourians who could benefit from medical marijuana will soon be able to use it without fear of being treated like criminals,” said MPP’s Schweich. “We hope lawmakers will implement the measure efficiently and effectively to ensure qualified patients can gain access to their medicine as soon as possible.”

In North Dakota, the cold wind of prairie conservatism and the Red Wave that swamped Sen. Heidi Heitkamp (D) was strong enough to overwhelm the Measure 3 legalization initiative. It managed to garner only 40.5 percent of the vote. Measure 3 was a grassroots effort with little outside support and strong and deep-pocketed opposition.

In Utah, despite the machinations of the Mormon Church and the state’s Republican political establishment, which sought to blunt support for Proposition 2 by promising to pass some sort of medical marijuana bill later this year, voters weren’t willing to wait. Prop 2 had 53.2 percent of the votes, with 76 percent of precincts reporting. Even in Deep Red Utah, medical marijuana wins.

Drug reformers pronounced themselves pleased with the results and pressed for federal action to end marijuana prohibition.

“This is yet another historic election for the movement to end marijuana prohibition. Voters have once again sent a message loud and clear that it is time to legalize and regulate marijuana,” said MPP executive director Steve Hawkins. “Marijuana has now been legalized for adult use in one out of every five states, so I think it’s safe to say federal laws are in need of an update. We hope the results of this election will inspire Congress to finally start addressing the tension that exists between state and federal marijuana laws in our nation.”

But wait, there’s more. Voters in a number of Wisconsin localities, including the population centers of Madison and Milwaukee, overwhelmingly approved non-binding referenda calling for marijuana legalization, while voters approved decriminalization in five out of six Ohio cities where it was on the ballot, including Dayton.

And in one of the sweeter outcomes of the Democrats’ retaking of the House, one of the biggest obstacles to marijuana reform in Congress, Rep. Pete Sessions (R-TX), lost to Democrat Colin Allred, a supporter of marijuana reform. As chairman of the House Rules Committee, Sessions repeatedly blocked reform measures from advancing. But his time has come and gone.

All in all, election day was a pretty good day for weed.