GOP Chair Goes Down in Flames After CNN's Jake Tapper Corners Her on Trump’s Racist Video: ‘I Know You Want to Change the Subject’ 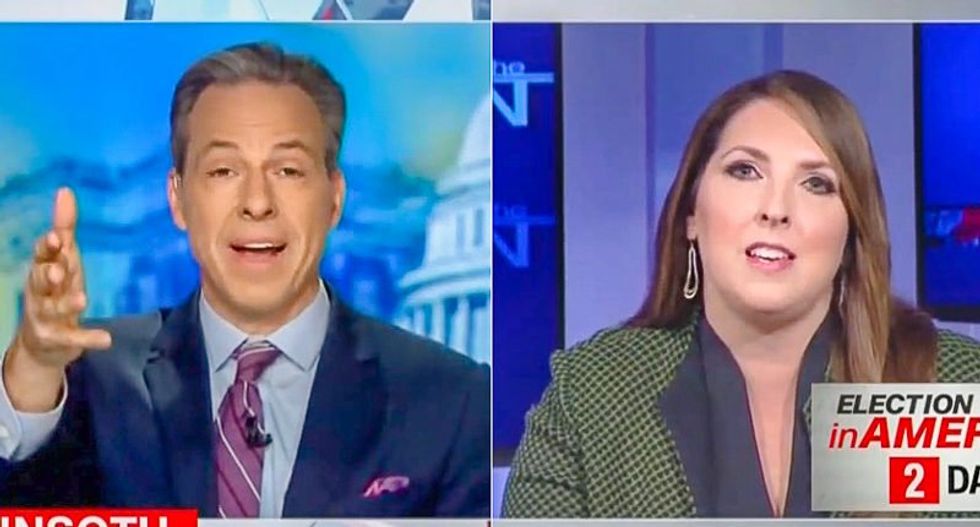 Republican National Committee Chair Ronna Romney McDaniel was confronted by CNN host Jake Tapper on Sunday after she falsely insisted that Democrats had not tried to work with the President Donald Trump to pass a comprehensive immigration bill.

“[T]he president’s closing argument in the midterms is focused on fears of undocumented immigrants,” Tapper told McDaniel, noting that Trump had promoted a racist advertisement that is “factually, it’s not true.”

“Do you have any concerns at all about this web video?” Tapper asked.

“We need to find a way to fix our immigration system” she continued. “Democrats won’t work with us.”

“You don’t have any issues at all [about the video]?” Tapper tried to say — but McDaniel spoke over him.

“To say [the president] is only focusing on one thing is false,” McDaniel opined.

“It’s factually inaccurate and it’s racially incendiary,” Tapper said of the video. “You don’t have any issue with that?”

“I have an issue with our immigration system that’s not being fixed,” McDaniel shot back. “And the Democrats won’t work with the president and we have caravans coming. In eight years, asylum claims are up 700 percent. By the way, what about the 12,000 kids that have come here unaccompanied?”

“Regardless, we don’t want him in the country!” McDaniel shouted. “This is exactly why our immigration system is failing.”

“Is it the Democrats fault?” Tapper queried.

“But who is the party saying, let’s fix it, Jake?” McDaniel said. “Who’s the party solving every problem right now?”

The GOP chair then attempted to deflect attention to the economy.

“I know you want to change the subject,” Tapper smiled. “Republicans control the House, the Senate and the White House.”

“They should be fixing the immigration problem,” McDaniel ranted.

“Democrats — the minority party — should be fixing the immigration problem?” Tapper asked.

“We only have 51 senators,” McDaniel complained.

“It’s not the Senate,” Tapper observed. “You couldn’t get legislation through the House.”

“I do not see a single Democrat saying let’s bring this country together,” McDaniel griped, ignoring Tapper’s point. “They can’t even tout how good our country is doing right now.”