Former Spy Chiefs Warn of Trump’s Dangerous Radicalization: ‘We Have Four Years to Stop Him’ 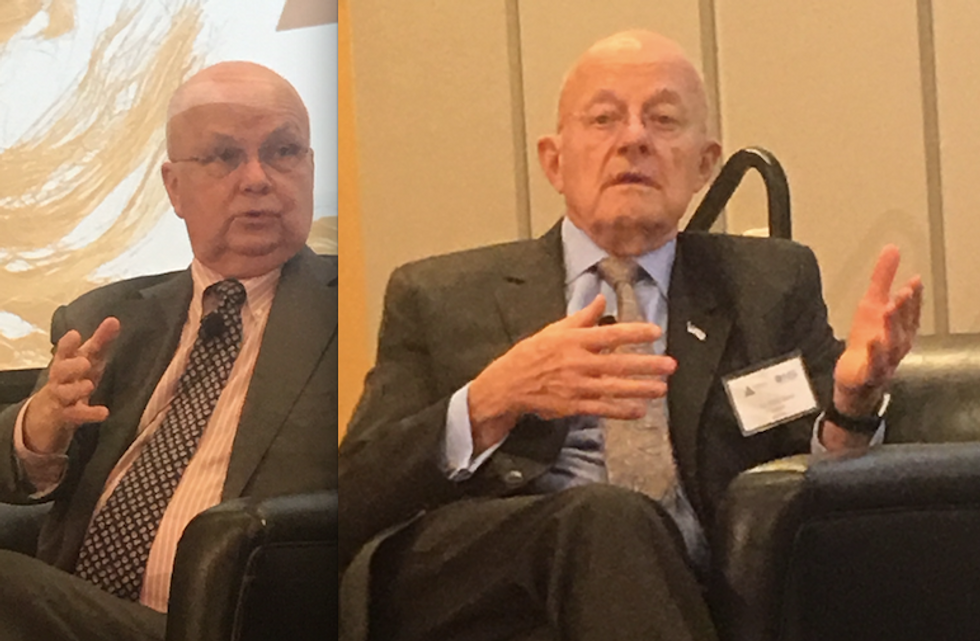 If you think some former U.S. intelligence officials have been harsh in their criticism of President Trump, well, they’re getting harsher.

In the wake of the mail bomb arrest and the Pittsburgh synagogue shootings, James Clapper and Michael Hayden are likening President Trump’s political rhetoric to radicalization tactics used by terrorists.

Clapper, former director of the National Security Agency, and addressee of one of the bombs mailed to CNN, told a Virginia audience on Wednesday, “It’s not unlike what we experienced with ISIS where you have a group using social media to recruit and radicalize their supporters.”

While former CIA director John Brennan has attacked Trump’s character, Clapper and Hayden have tried to restrict themselves to issues of policy. No more. The president is acting like a recruiter for a terrorist organization, and a few among his supporters are acting like terrorists, the former spy chiefs say.

Former CIA director Michael Hayden, who appeared with Clapper at George Mason University, added, “I don’t want to say the two groups are equivalent, but there are parallels.”

Hayden proceeded to spell them out.

“At CIA when our people looked at radicalization, I asked, ‘Is it the ideology of al-Qaeda or ISIS that attracts them? Or are these unhappy young males, who don’t have a job, have disappointments, are unattached, and are looking to attach themselves to a larger cause?”

“In this country,” said Hayden, “what you get are individuals who are unhappy, violence-prone on their own, with a great sense of grievance, who now get legitimization and justification for their grievance by attaching it to something larger themselves. .... and here’s what’s new. They now have a set of grievances to which they can attach themselves that have been articulated by the president of the United States of America.”

The charge is severe, but the most recent evidence lends credence to the claim.

“If you look at the bomber, it was all there on his van,” Hayden said. “If you look at the incident in Squirrel Hill in Pittsburgh, [the shooter who killed 11 people had] a latent anti-Semitism, but the proximate cause was his belief that international Jewry was sponsoring the invasion of America by that caravan which is still a thousand miles from the U.S. border. That has been a constant theme coming from the White House.”

‘We Don’t Have Eight Years’

Both men said Trump’s attacks on the press, the FBI, and his critics are damaging the country’s democratic institutions, perhaps irretrievably. “We have four years to stop him,” Hayden said. “We don’t have eight.”

And both men were pessimistic that the situation would change any time soon.

In a sardonic reference to Trump’s description of himself, Clapper said, “As long as the ‘stable genius’ continues to use his kind of rhetoric, we will see radicalization.”

Clapper and Hayden’s assessment might be the most ominous intelligence warning since a CIA briefer told President Bush in August 2001 that Osama bin Laden was “determined to strike in the United States.” Except now the threat comes from the president himself.