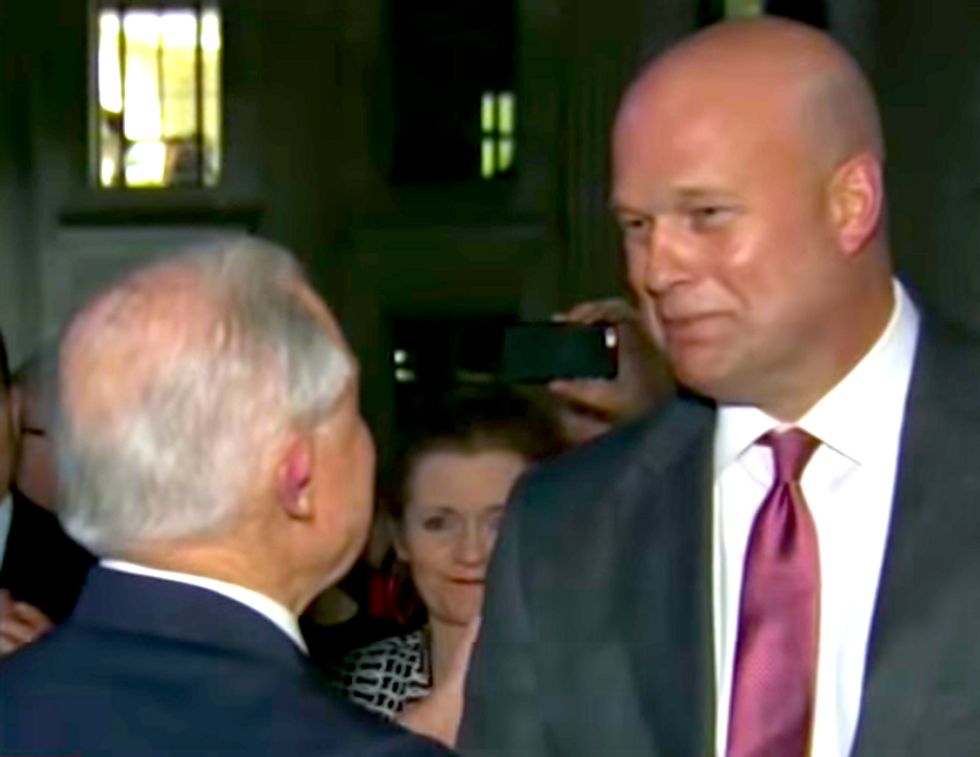 Many legal and constitutional scholars have come forward to decry President Donald Trump's appointment of Matthew Whitaker as the new acting attorney general — part of a blatant attempt to wrest control of Robert Mueller's Russia investigation — as fundamentally illegitimate.

Former deputy assistant attorney general John Yoo, who served under President George W. Bush, joined the chorus calling out the appointment as unconstitutional in a new opinion piece for The Atlantic Tuesday. He also noted, provocatively, that the constitutionality of the appointment provides an opening for Mueller to protect the investigation from undue interference.

Yoo and others argue that the Constitution's requirement that all principal officers in the executive branch be approved by the Senate rules out Whitaker's appointment. As former Attorney General Jeff Sessions' chief of staff, Whitaker was never confirmed by the Senate, and Trump can only appoint someone to be attorney general — even on an acting basis — who has congressional approval.

"Whitaker’s appointment violates the appointments clause’s clear text because he serves as attorney general, even if in an acting capacity, but never underwent Senate advice and consent," wrote Yoo.

He noted that some might argue this application of the Constitution is archaic, but he argued that this is exactly the kind of legal reasoning that conservative judges, in particular, think is illegitimate. And not only does violating the appointments clause undermine the Constitution, it does so for a very bad reason.

"To prevent the president from using appointments to advance his private interests, just as Trump critics today charge, the Constitution prohibits filling the position of attorney general with a series of officials who never received Senate consent," he explained. "Deputy Attorney General Rod Rosenstein, Solicitor General Noel Francisco, the several assistant attorneys general, even any of the 93 U.S. attorneys in the nation’s major cities could all temporarily fill in for Sessions, as they received senatorial advice and consent. Whitaker, and any other Justice Department official or employee, cannot."

With this argument in mind, Yoo said, Mueller is empowered to reject any inappropriate orders or directions Whitaker might try to impose.

"With questions surrounding the ethics and now the legality of his appointment, Whitaker will have little political capital to expend in defending any limits on Mueller," he observed. "And even if Whitaker displays terrible judgment and makes the fateful choice to cut off the probe, Mueller now has the grounds to refuse to obey the orders of an unconstitutional attorney general."

But this is hardly an upside for Yoo. It means, in essence, that the country's chief law enforcement official is impotent — an illegitimate figurehead unable to carry out his key duties.

"Liberals no less than conservatives should oppose a hiatus in the execution of federal law. The only way to cure it is for the president to quickly nominate an attorney general from the deep pool of qualified candidates and for the Senate to speedily confirm him or her so that our officials can get back to the business of carrying out the nation’s laws," he concludes.