This Election Is Exactly Who We Are: Divided By Race, Geography and Gender 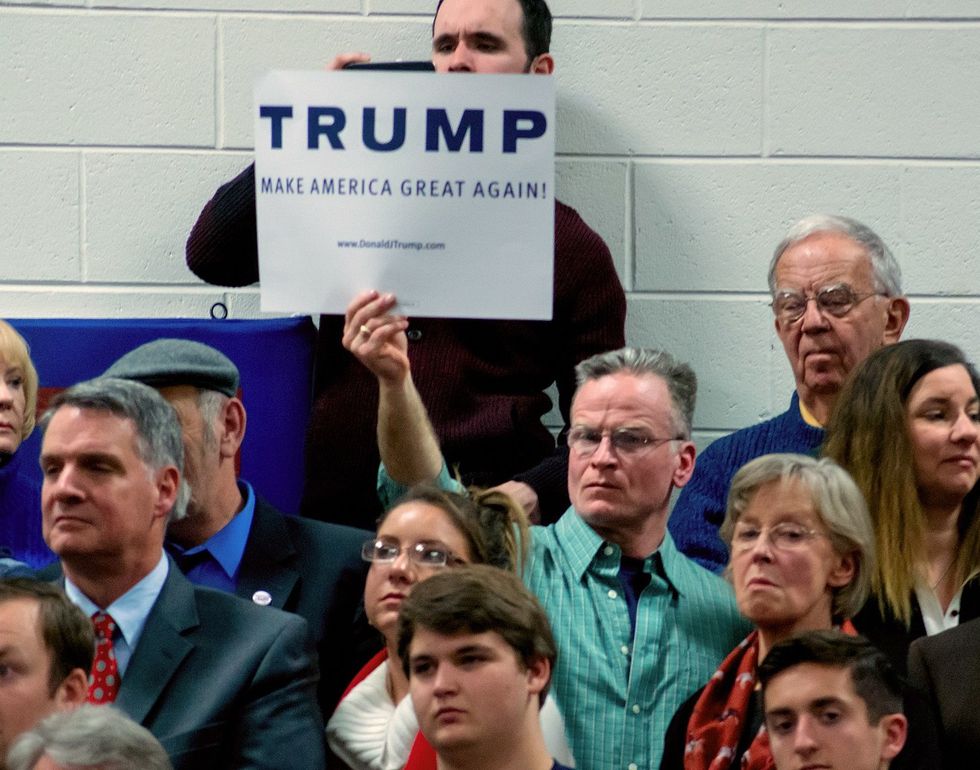 But the pendulum is stuck. It’s stuck because Donald Trump came along and gave about 40 percent of the electorate permission to come out of the closet where they had been sitting with their racism, misogyny, and nativism. And they delivered.

They’re out there now, the so-called Trump “base.” In fact, they’ve taken over one of our two political parties. The party of Lincoln, the party of Eisenhower, the party that helped to lead the way on civil rights, the party of Morning in America and the Shining City on a hill, for crying out loud! The Republican Party — remember them? — is now the party of Donald Trump.

Call it what you will — a movement, a cult of personality, a political tribe — it’s a fixture of American political life, and it’s not going away. It’s hugely white, and largely male, and mostly rural, and getting older every day, but it’s a solid block of voters, and Trump has them locked up.

Sure, the election yesterday showed that there’s been some erosion among Republicans. They lost the moderate women in the suburbs around major cities in Pennsylvania, the Midwest, and even Orange County, California. Democratic wins in House districts that had been previously red show that not even Republican gerrymandering since 2010 could save Republican candidates from a wave in House elections that wasn’t as blue as it was rainbow and female.

But Trump didn’t just let the genie out of the bottle when it comes to racism, misogyny and xenophobia. He invited the genie into the White House and set him up in the Lincoln bedroom and told the White House mess to keep the Diet Cokes and burgers coming. It’s hardly worth going through how racist and nativist the Trump White House is — not a single African American in a position of any significance, not even among interns. Steven Miller holding the Chair in Immigrant Bashing. John Bolton — John Bolton! — in charge of the National Security Council. The man is pals with the likes of the nation’s number one Muslim-hater, Frank Gaffney.

You know what it takes to get someone out of a cult like Scientology? An intervention. Probably several interventions. You can’t do an intervention on the Trump base. They aren’t persuadable. There’s too many of them. They’re done for. Gone. They’re his.

What does it mean, what happened yesterday? It means Trump is free. Don’t worry about him doing anything desperate, like starting a war. He doesn’t have to. He’ll go straight from demonizing the penniless people in the “caravan” to demonizing Democrats. He’ll continue to demonize the media. In fact, he’s already started. In the closing days of the campaign for the midterms, he was telling his rallies that Democrats are “evil,” that Democrats are “using a wrecking ball on our country,” that Democrats will do everything from opening our borders, to taking away your Medicare and Social Security. He told them that the media caused the killings in Pittsburgh and in the pipe bombs sent to Democrats, because the media was reporting “fake news.” He went from telling five or six lies a day to telling ten. One day, he was reported to have told 70 lies, misstatements of fact, or exaggerations. Seventy.

Trump was asked if he thought he could use his “relationships across the aisle” to bring some peace to our political life. He answered, “I would love to see some peace, and love and harmony,” and then launched into an attack on the media for covering him unfairly and inaccurately, his face scowling.

Doesn’t he just love to fucking lie? There’s nothing Trump would like to see less than peace and love and harmony. He wants an all-out war with the Democrats, because less than 24 hours after the polls closed for the midterms, he’s running full-out for re-election in 2020. What works for Trump is division and discord and hate, and he’s going to promote a war with Democrats every day for the next two years. Every day.

He told the press conference that he’d held over 30 rallies in the last 60 days. Wait until you see what he does now. The Air Force will need to put on extra mechanics, because he’s going to wear out Air Force One. He’s going to hold rallies in high school gyms in one stoplight towns. He’s going to spew his lies and hate as far and as wide as he can, because that’s what works for him. He plays the Rolling Stones at his rallies because he thinks of himself as a political rock star, and in red hat-wearing America, he is. He’s a chubby Mick Jagger. He’s a white Kayne West. He’s Kid Rock, without the kid, and without the rock.

The question of the moment is, what do Democrats do now that they’ve taken the House and have some momentum? I’ve never heard the names of committee chairmen like Adam Schiff, Jerry Nadler, and Elijah Cummings spoken so reverently so many times by so many grinning pundits in my life. They’re using the word “oversight” like it might actually mean something.

Sure, House committees should do what they’re supposed to do and ride herd over the runaway corruption of the Trump administration, which has already had resignations of cabinet secretaries and indictments and convictions of at least one senior White House official — Michael Flynn — with more probably on the way.

But did you notice what seemed not to carry much weight in the midterms? The Russia investigation. Did you hear anyone out there on the stump yelling about Tom Price or Scott Pruitt, ousted from the Trump cabinet after multiple investigations of corruption? I didn’t.

Trump is licking his chops, waiting for Democrats to hold their congressional hearings and issue their subpoenas. He practically had an orgasm answering a question about Democrats going after his tax returns. He can’t wait. He’ll throw down legal roadblocks and then sit back and scream at the “fake news media” for covering him unfairly. Trump isn’t so much a counterpuncher as he is a mud wrestler. He could turn good weather into an issue to use against Democrats. In fact, I think he already has.

I can’t wait for Nancy Pelosi to take the gavel when the House reconvenes in January. I can’t wait for Adam Schiff to put some Trumpkins back under oath who lied to his committee when Devin Nunes ran it. But I hope Pelosi is prepared to ignore the tsunami of tweets Trump has ready for her, because that’s the only way to handle them. She should start right now by leading a movement to unfollow Trump on Twitter. Call it the “Delete His Tweets” movement. But do something, and do it now.

I hope Democrats take the gains they made in the battleground states of Michigan, Ohio, Pennsylvania, and Wisconsin (Scott Walker gone! Yaaay!) and double down this way: Start right now looking for venues and scheduling rallies. And start right now looking for a candidate who will fill them with blue hat wearing citizens who will turn out and vote.