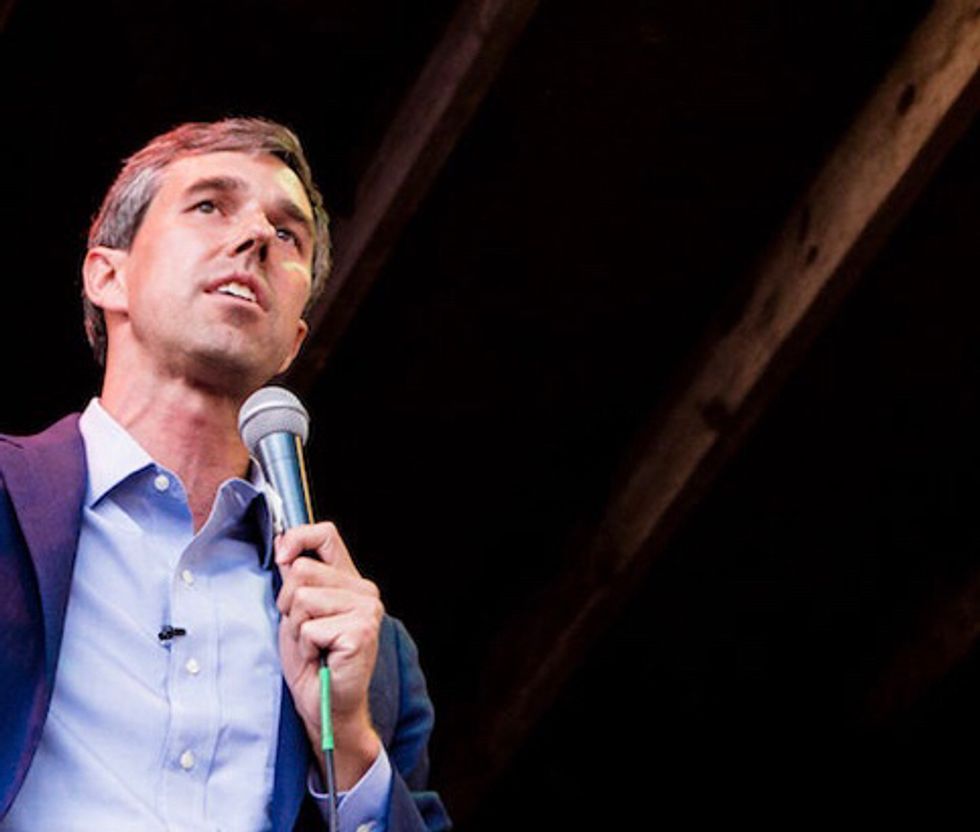 Early voting by Texans under 30 is up more than 500 percent compared to the 2014 midterms in what can only be described as great news for Democratic Senate hopeful Rep. Beto O'Rourke, who has a huge lead over incumbent Sen. Ted Cruz among young voters.

The Independent reports that early voting by Texans between 18 and 29 years old is up by 508 percent this year compared to the last midterm election, which featured a gubernatorial race between Republican Greg Abbott and Democrat Wendy Davis. Abbott won that race by more than 20 points.

Overall, more than 200,000 Texans voted for the very first time this year.

According to a Quinnipiac poll published earlier this week, 66 percent of voters under 34 back O'Rourke, along with 86 percent of black voters and 60 percent of Hispanic voters. He also leads Cruz 52 to 45 percent among women.

On the other hand, Cruz has the support of 67 percent of white voters and 56 percent of men. The poll showed him leading by 5 percent overall.

Although election forecaster FiveThirtyEight only gives O'Rourke a 20 percent chance to win, two new polls published this week suggest the race could be tightening.

A University of Texas-Tyler poll found Cruz leading by 4 points among likely voters, while an Emerson College poll put Cruz's lead at 3 percent.

Georgia is seeing a massive spike in youth voting as well, with turnout among voters 28 and under up 476 percent amid Democrat Stacey Abrams' gubernatorial bid against Republican Secretary of State Brian Kemp, who has been accused of voter suppression in the race. Early voting among Hispanic voters is up 571 percent and early voting by African-Americans is up 165 percent. Voting among white voters and seniors is also up, but not as dramatically.

Abrams leads Kemp 55 to 42 percent among voters under 30 and 84 to 11 percent among African-American voters, according to an NBC News/Marist poll.

Polls show a dead-even race between Abrams and Kemp, and if neither candidate garners 50 percent of the vote, the race would go to a runoff. Neither one has hit the 50 percent mark in any of the polls released in the race.

Texas and Georgia aren't the only closes race where young voters are turning out. Data shows young voter turnout in Nevada, Florida and Arizona has at least doubled while increasing by 400 percent in Pennsylvania. All four states have also seen increases in the African-American vote, as well as turnout among white voters and those over 65.

According to a Harvard IOP poll, 40 percent of voters 18 to 29 say they will “definitely” vote in this year's elections, double the number who said they would in 2014.

“Voters under the age of 30, relative to their ’14 turnout, are outperforming every other group,” Tom Bonier of TargetSmart, the group that compiled the data, told The Hill. “It’s not just like a presidential year surge where you’re getting younger voters who only vote in presidential elections coming out in a midterm. A lot of these young people are voting in their first election, period.”