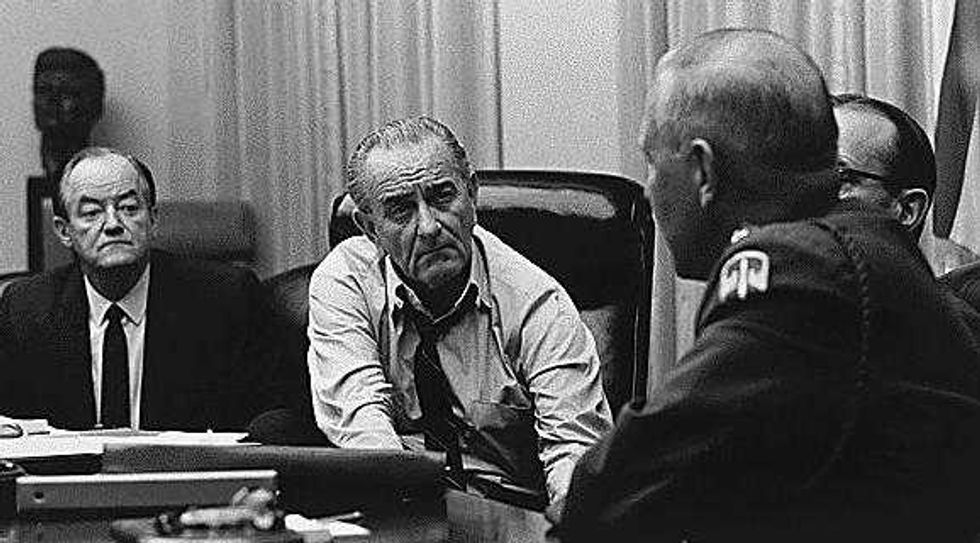 Donald Trump sells himself as a man’s man.

When Trump projects old-fashioned male power full of aggression and swagger, he gratifies his culturally conservative base, both men and women.

Democratic politicians, by contrast, rarely discuss masculinity. That might seem obvious for a party which, heading into the 2018 midterm elections, is seeking a “year of the woman.”

During an election that took place exactly 50 years ago, however, ideas about manhood played a central role for the Democrats. As I describe in my forthcoming book “The Men and the Moment,” the Democratic Party was grappling with its identity in 1968. Its struggle was on display in the personal dynamic between its two most significant figures: party leaders Lyndon Johnson and Hubert Humphrey.

Both men were giants of American liberalism. But Johnson did not trust Humphrey as president, because he did not respect Humphrey as a man. That friction led to one of the most extraordinary and underappreciated tales in modern American political history: President Johnson kept undercutting the presidential campaign of Humphrey, his own vice president.

It is a story with lasting implications for the Democratic Party.

‘He cries too much’

In 1968, presidential politics was still a man’s world.

The modern women’s movement was in its infancy. Washington D.C. was the province of powerful white men.

As scholars such as Robert Dean and K.A. Cuordileone have shown, Cold War Democrats such as President John F. Kennedy held an ideal of manly, vigorous toughness that shaped their vision of honorable leadership during the Cold War. It also drew them into the military morass of Vietnam.

Liberals – with their nurturing, optimistic ethic – were vulnerable to accusations of weak manhood. In the 1950s, while carrying out his Red Scare witch hunts, Republican Sen. Joe McCarthy purged homosexuals from federal agencies, linking sexuality with subversion. Liberals were “soft” by association.

But Kennedy’s successor as president, Lyndon Johnson of Texas, was a big, macho man who applied his earthy masculinity to progressive ends. The notorious “Johnson Treatment” combined cajoling, vulgar analogies, veiled threats and physical force. He used it in the service of passing “Great Society” legislation that included the Civil Rights Act and Voting Rights Act, Medicare and Medicaid, and dozens of other initiatives.

Johnson famously reflected to biographer Doris Kearns Goodwin that the Great Society was “the woman I really loved” and Vietnam was “that bitch of a war.” The military struggle, in his mind, demanded strong male traits such as toughness and sacrifice. He worried that if Vietnam fell to communism, then he would get labeled “a coward. An unmanly man. A man without a spine.”

He considered Humphrey, his vice president, one of those weak men.

Humphrey did cry a lot. He cried during speeches when he got too wound up. He cried after JFK crushed him in the 1960 West Virginia primary, burying his presidential bid. He cried at the sight of wounded American soldiers in Vietnam hospitals.

Humphrey was authentically emotional and empathetic. As a senator from Minnesota, he established a reputation as an energetic, sincere and pragmatic spokesman for liberal values. In early 1965, prior to the massive military escalation in Vietnam, Humphrey privately advocated a peace settlement.

But Johnson demanded Humphrey’s loyalty, and Humphrey succumbed to Johnson’s domination. To appease the president, Humphrey sold the war to Congress and the public with trademark fervor. By 1968, Humphrey had curried favor with the Democratic establishment, but destroyed his progressive reputation.

“In the eyes of many of his old allies,” suggested Philip D. Carter in the Atlantic magazine, “the new Hubert is but a vestige, morally and ideologically diminished by his years of faithful service to the Great Emasculator.”

Once Johnson announced that he would not seek re-election in 1968, Humphrey became the heir to the Democratic nomination. But as the anti-war movement escalated, he also became an icon of national malaise.

Prior to the Democratic National Convention that August, Humphrey sought a compromise position that opened the possibility of a bombing halt in North Vietnam, which could kickstart the peace process. But Johnson shot down those suggestions.

Anti-war protests kept plaguing his rallies. Other Democratic candidates treated him like a contagious disease. In September 1968, a Gallup poll gave him only 28 percent of the vote. Tom Wicker of The New York Times called Humphrey “a burnt-out case who left his political manhood somewhere in the dark places of the Johnson administration.”

But what if Lyndon Johnson had presented his vice president as the man to deliver peace in Vietnam? Could it have swung the election?

LBJ had no regrets.

“I often think it’s a good thing that Hubert Humphrey never got to be President – for his own good and the good of the country,” he told a former aide while retired on his Texas ranch. Humphrey, he said, “hasn’t got much more spine than a small girl.” A real man, to Johnson, stands up for himself – even if it meant challenging his boss, the President of the United States.

In 1968, strong leadership was cast in traditional masculine terms – for both good and ill. At his best, Johnson championed a muscular and wide-armed vision of American progress, while Humphrey personified an authentic, empathetic liberalism. They were doomed, together, by Johnson’s compulsion to dominate and Humphrey’s tendency to crumple, leading to a tragic war and failed election.

What does this mean for today’s Democratic Party?

I believe that it would be absurd for this more inclusive, progressive party to adopt the masculine clichÃ©s of the past. Since 1968, the party has enacted reforms and crafted appeals that have opened more room for women, racial minorities and youth. Women’s rights are a core value for the party. It ran Hillary Clinton for president. Many of its brightest stars are women.

Yet if the Democratic Party ever plans on rebuilding a legitimate coalition that captures the broad middle swath of Americans, it needs men of many stripes – and a huge majority of men consider masculinity as part of their identity.

Liberal politicians can trumpet a vision of manhood that includes respecting women, asserting independence and wielding power for the common good. In other words, they can take the best from both Johnson and Humphrey, while discarding the worst.

Check out The Conversation US’ podcast “Heat and Light,” a seven-episode series hosted by award-winning journalist Phillip Martin, looking at pivotal moments from 1968.