Here's How We Can Create a Common-Good Politics 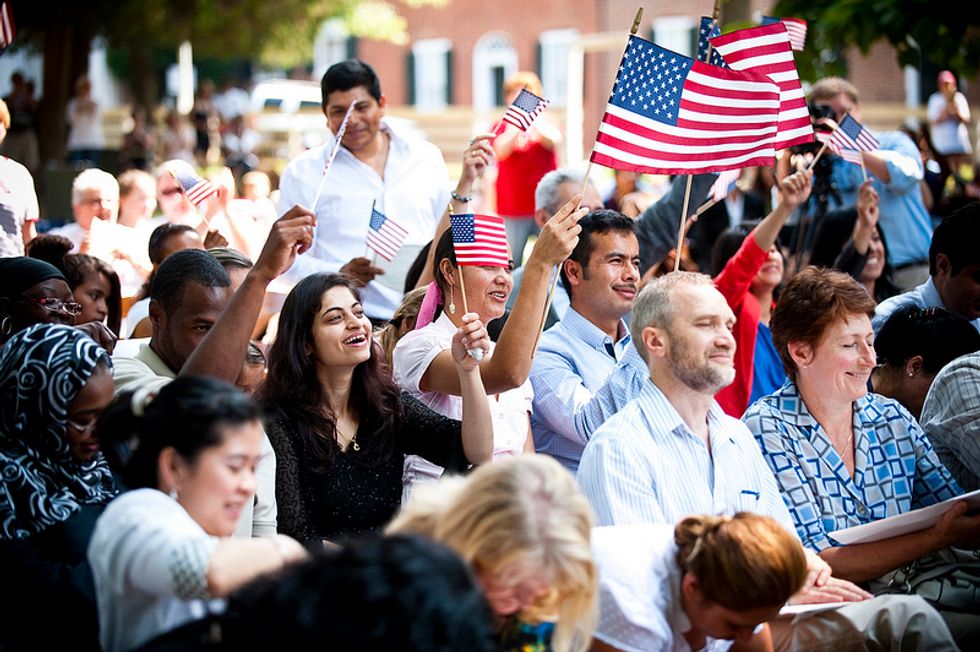 Way back in 2004, I was in Ohio in the run-up to that year’s presidential election. I had a chance to talk to a woman who was one of the undecided “values voters” who would become folklore among political strategists and pundits in the ensuing years.

“I guess I probably like Kerry’s policies more than Bush’s,” she said, “but at the end of the day, when Bush is unsure what to do, I trust that he will pray to Jesus to find his way. And then America will be more likely to find favor in the Lord.”

I shook my head, as I imagine many others do when they encounter political mindsets like that, and walked away. All these years later, though, I have been humbled by a decade and a half of history, and am far more curious today about what that woman, and the many Americans like her, meant by that, and how we can bridge the divide between us—in elections and after the votes are counted.

One way that progressives can do this is to find a new way forward for our own movement, one that opens space for a wider range of values and identities. After an important and polarizing national election, like this one, it is not an easy time but it is a crucial time to take a step back and ask ourselves one very challenging question: What role have we played in creating these deep divisions? Only then, can we examine what we can do to help heal them.

I’m not talking about “centrist” candidates, watered-down compromise positions, or some mythical moderate “middle.” I’m talking about understanding the two typologies that are essentially waging a war over the soul of America.

I believe there’s a road to be found toward common-good politics, where the values that undergird those two typologies can become compatible, and even complementary. Can we move away from caricature, away from our fear of the other, and actually seek to be enriched by taking seriously the building blocks of each other’s worldviews? Can we honor the values that each “camp” holds dear?

I say we can. The values of others are not a threat simply because they’re different from ours, and it is fundamentally counterproductive to imagine that they can be “defeated.” You can’t defeat the other side’s values. In trying to do so, you only strengthen their devotion to them, and vice versa. Instead, if we show others that what matters to them matters to us, that creates the space needed to forge new solutions.

We live in a moment when a narrative has been built in which we appear to be fundamentally at odds. In this narrative, the much-talked-about liberal elite is described as:

Conservatives, on the other hand, have come to be defined by localism, particularism and religion:

(For an interesting TED Talk on the typologies and how to combat them, check out Jonathan Haidt’s “The Moral Roots of Liberals and Conservatives” [2008].)

Through my experience, I have become all too familiar with how little tolerance there often is for the liberal side of this typology among conservatives, for sure. And, while the caricature might be unfair, what has been so surprising to me is how intolerant liberals have become of the conservative typology and the lived experiences of those who subscribe to it. For example, it wouldn’t be out of the ordinary to hear one of my progressive friends saying, in reference to outsourced manufacturing jobs in the heartland:

“Those towns have been left behind, and there is nothing we can do about it. Technology, globalization and now automation are the new reality. If people can do well in school, relocate and retrain, there’s lots of opportunity out there.”

Or on climate change:

“Science tells us that carbon emissions are causing global warming. We know it is man-made, and if those backward-looking evangelicals would stop hiding behind their irrational claims about God and the end of days, we could deal with this rationally.”

“America was formed from many faiths and ethnic traditions, and we must give them all space in today’s conversations. In the end, all the great traditions say the same thing about how we treat each other and what is fair.”

Democrats elected in Washington are typically perceived by conservative voters through this framework: global versus local, universal versus particular, and secular versus religious. This contributes to the splintering of the coalition progressives need to build in order to enact the policies they’ve been pushing for. Without a broad majority, there is no action on climate change, gun violence, income inequality, or any of the dire issues that we face. We can build that coalition—if we take seriously the pillars of a worldview that has been ignored for too long: the local, the particular, the religious.

The reality is, forging a new common-good politics requires finding a way that you can love your local place, be particular about your own tradition and believe in God, and still be at home with our shared values. Rather than looking across the ocean, the conservative voter is likely to be concerned about the pond where his dad taught him to fish; rather than believing that she will be the beneficiary of international cooperation, this voter is more likely to be concerned about how her own town thrives again; rather than seeking ecumenical interfaith experiences, these voters remain interested primarily in their own religious background and the moral compass it gives them.

Many of the reforms and causes progressives have championed are compatible with conservative Americans’ devotion to the specificity of place, a patriotic dedication to the unique American experiment, the particularity of community, and personal faith traditions.

If we can’t get inside this worldview and weave it together with our own, many Americans will have little reason to trust the important social programs and reforms that the progressive movement is committed to. The longer we dwell on these questions, the more obvious it becomes how vital it is to develop a political typology where the religious and the secular, the global and the local, the particular and the universal can be woven together authentically.

Closer to home, I’ve seen an encouraging example of how this can work: My wife is as progressive as they come, supportive of all the issues that define modern-day liberals, progressives, and Democrats—and she is also Jewish, born and raised in Baltimore. She loves her hometown, and is committed to seeing it succeed. It’s equally important to her that our children be raised not only with generic universalist values, but within the Jewish tradition—the Hebrew Bible, the Exodus story, the history that belongs very particularly to us. She reconciles the two typologies.

Working-class Americans of all races wake up every day caring about God, family and country (and sports), and if we can’t get inside that worldview, and see the wisdom in it, we will always sound like our ideas are outside of the realm of common sense for too many people.

Millions of people just went to the polls. Many of them felt that there was no room for them in the progressive movement. It’s our job to prove them wrong.