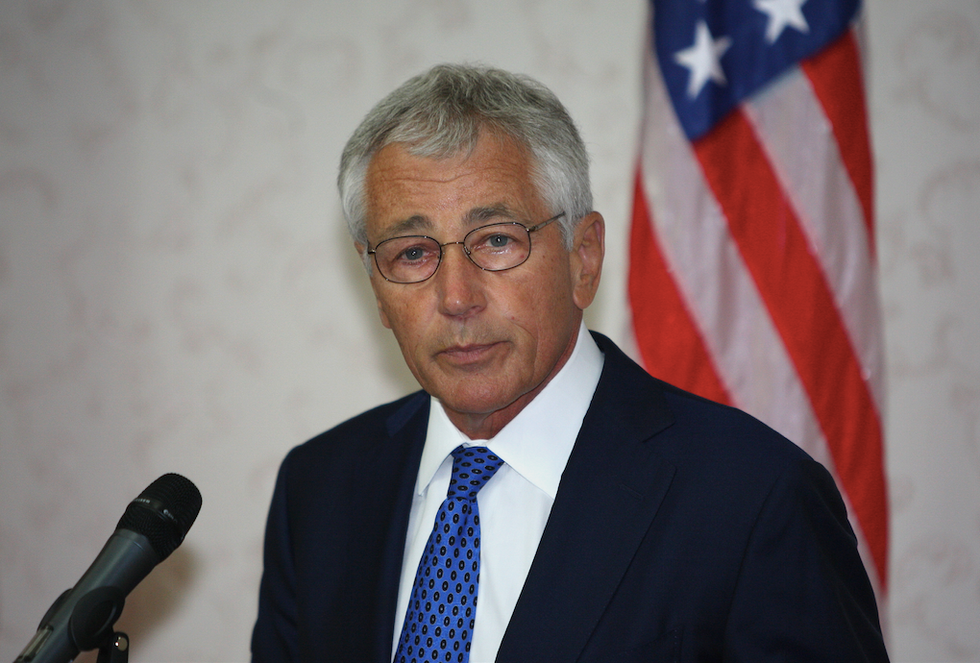 Hoping to excite his supporters in the face of midterm danger signs, President Donald Trump is sending 15,000 troops to the border in order to combat the Honduran "migrant caravan" that is not even here yet, will probably disperse before arriving, and is not in any way a national security threat. Trump is even encouraging them to use excessive force, saying that U.S. soldiers will shoot anyone who throws rocks.

This entire spectacle has left people cognizant of real national security issues aghast, including Chuck Hagel, the former Republican senator from Nebraska and Secretary of Defense under President Barack Obama, who appeared on CNN with Jake Tapper to condemn Trump's military ploy.

"Senator, you were not only Secretary of Defense, but you carried a rifle in Vietnam as a soldier, an infantryman, I believe," said Tapper. "What's your reaction?"

"My reaction in listening to that, coming from the commander in chief of our forces, President of the United States, is one of disgust," said Hagel. "That's a wanton incitement of unnecessary violence, it's a distraction, it's a distortion. It's a rank political distortion to use our military like this, and to say those kinds of things is really astounding. Not in my lifetime have I ever heard those kinds of words from a president of the United States."

Tapper then pointed out that the number of troops Trump wants to station on the border, 15,000, is about the same as the amount we have stationed in Afghanistan and three times as many as are currently fighting ISIS in Iraq and Syria.

"This is folly," Hagel said. "This is political distraction of the highest magnitude. The fact is, taking thousands of American troops who are trained on the cutting edge all the time, and sending them down to a border where there is no need, there's no threat to an invasion of the hordes coming in from Latin America, which is a joke — and they are of limited utility anyway, because of the constitutional issues involved here as to what our active military can and cannot do — and so, it's clear to me that he's using our military and our troops in a very political way that, it really casts a lot of questions about the competency of his leadership."

"I know the kind of sacrifices these men and women are involved with every day, and their families," Hagel went on. "And to use them as political pawns like this, as a complete fabrication, is really wrong." Watch below: