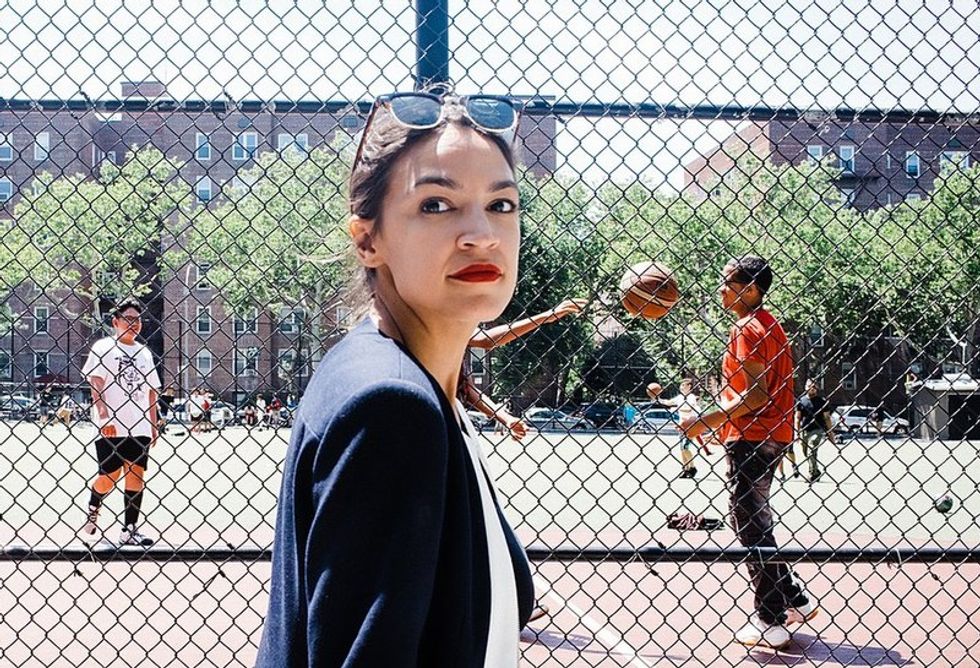 She can and did win at the political ground game that propelled her to a primary victory over longtime incumbent Joe Crowley, leading to her decisive election to represent New York’s 14th congressional district, and in January she’ll become the youngest woman ever to serve in Congress. That’s the win that counts, by the way — and the people who are offended by her youth, by her outspoken progressive stances on policy issues, by her refusal to pretend that a run for office in America isn’t still overwhelmingly tilted in favor of the affluent established white male, they know it. Her detractors can’t grant her even begrudgingly the respect that her remarkable victory demands and consider that she represents a new generation of American voter, so they look for other fights to pick. Handily, Ocasio-Cortez is a woman of color in America, so there’s no shortage of grotesque assumptions and biases in the collective psyche to mine.

Over the last week or so, she’s been put through a round of conservative media trolling that boils down to “ladies can’t manage money, amirite?” The right-wing outrage machine lost its mind over the former bartender’s candor about managing her transition period between New York and D.C. without the extra cash it takes to set up a Washington apartment before her congressional salary kicks in. As she told the New York Times, “We’re kind of just dealing with the logistics of it day by day, but I’ve really been just kind of squirreling away and then hoping that gets me to January.”

Cue the dishonest bellowing designed to intimidate her back to her borough: She can’t manage a budget, she’s a deadbeat without a real job, maybe this whole Congress thing is just a scam! They’re not saying she’s a gold digger, of course . . .

Never mind that anyone who’s had to move for a job without a relo package from Fox News recognized this particular struggle as real. Even those who haven’t done that feel the reality of “just dealing with the logistics of it day by day,” every single day. (Forget E Pluribus Unum and In God We Trust, that’s the real motto for most Americans.) Meanwhile, anywhere from 40 to 100 members of Congress had been living in their offices rent-free — outgoing Speaker of the House Paul Ryan included — prompting an outcry earlier this year over the ethics of the practice that Rep. Bennie Thompson, D-Miss., described as “unhealthy, unsanitary — and some people would say it’s almost nasty.”

So, to recap: If you can afford an apartment but choose not to rent one and instead sleep in your office like a cheating movie husband whose wife has changed the locks, you’re a fiscally conservative hero. But if you’re honest about not being able to afford two residences during your unpaid transition period, you’re a loser.

And even when Ocasio-Cortez does sign a lease on new D.C. digs, there's no winning their shame game, which is a barely-disguised excuse to act out what my colleague Amanda Marcotte, author of "Troll Nation," characterizes as the contemporary conservative's culture of resentment and hatred towards liberals. Ocasio-Cortez's apartment, even if it's utterly standard for a member of Congress, will either be “too nice,” mark her as a hypocrite and scam artist who just says what she needs to say to get that sweet taxpayer-funded check, or it will be too shabby, branding her as a loser in barely-coded terms that will saunter right up to the line of suggesting that such rundown housing is all she could know, poor dear. For a young, working-class Latinx woman, there is no safety play. They've designed the catch-22 to ensure she'll always be too something to be a “good fit” for the job.

Last night, a Washington Examiner reporter named Eddie Scarry tweeted out a photo of Ocasio-Cortez walking down a hallway — taken from behind, surveillance/creeper-style — with this off-brand Regina George caption: “Hill staffer sent me this pic of Ocasio-Cortez they took just now. I’ll tell you something: that jacket and coat don’t look like a girl who struggles.” (Cue Elle Woods' response to Vivian Kensington: Oh, I like your outfit too ...)

Scarry’s smarmy tweet got ratioed so hard he deleted it, then floated the hilariously disingenuous claim that he was just trying to compliment her, you guys!

Meanwhile the memes mocking the absurdity of his amateur-hour reindeer game rolled in, applying his caption to photos of everyone from David Byrne in the "Stop Making Sense" Big Suit to Lennie Kravitz in his infamous Big Scarf.

Any woman alive recognizes Scarry's tweet as a misogynist dog whistle, suggesting that what's really questionable about Ocasio-Cortez has nothing to do with her outfit. It doesn't matter if she pairs items from a gift subscription to Rent the Runway with her own thrift store finds; it wouldn't matter if she received that jacket as an early holiday gift from a family member or scored it on clearance at Nordstrom Rack for less than the price of a dinner out. She could patiently walk reporters through her personal budget and show itemized, meticulously catalogued receipts for every piece in her closet. But why bother to play along? None of that matters, because nobody actually cares about her suits. Her clothes are only a moving, meaningful target because a progressive woman is wearing them, and that will continue to be true — and not only in conservative media, but across the board — until the day that a Democratic woman of color who looks like she slept in her blazer and can't find a comb with both hands is heralded by the paper of record as "Rumpled, Unvarnished, and Just Maybe a Candidate for President."

Alexandria Ocasio-Cortez can't win in these rigged shame games, which is why the conservative carny crew keep trying so desperately to get her to play. It's deliciously satisfying to watch her sail right past the desperate barker and even call out the balloon dart's dull point, all without breaking her stride.