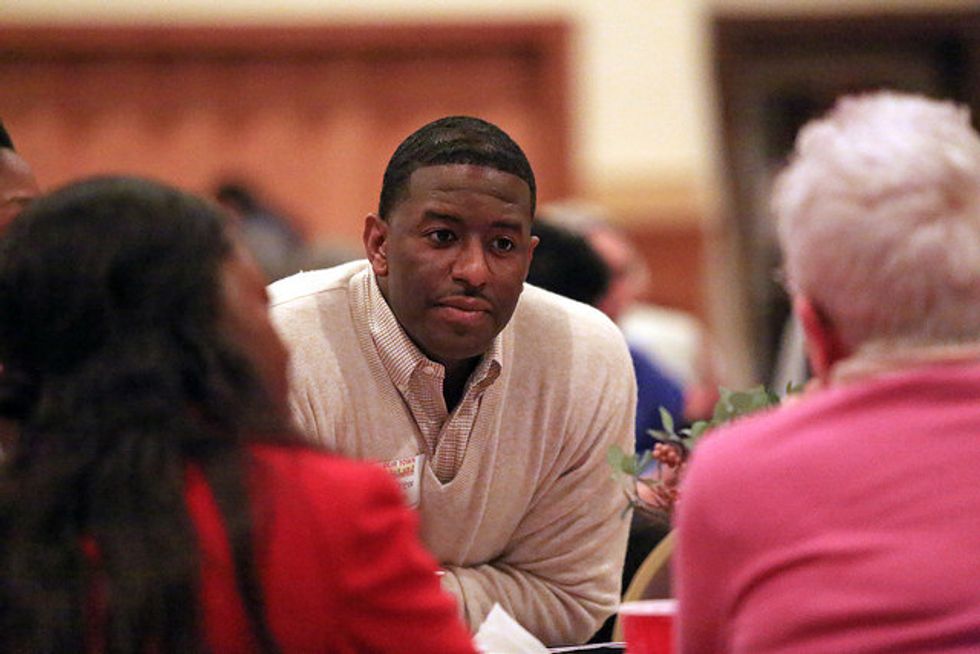 Andrew Gillum’s campaign for governor of Florida and his recent victory in that state’s Democratic primary have gained national attention, but not always the right kind. Gillum, who is African-American, is being heralded by President Obama, national Democratic Party donors and leaders, and thousands of inspired supporters as a true progressive who can re-activate the Obama coalition. His progressive views on climate change, gun violence prevention and abuses by ICE are held up as evidence that he is the kind of Democrat who can excite the base and lead us into the future.

While these positions are indeed progressive and reflect Andrew’s deeply held beliefs, they aren’t, in my opinion, what makes his candidacy for governor so inspiring. For too many Democrats, the recipe has been to focus on identity and rights, thus tying political liberalism to the economic neoliberalism of tech and finance mega-donors, with the fingers-crossed hope that it’ll be a good enough fit for millennials and the rising American electorate to carry the political day. What Gillum is showing us, though, is that Democrats can still support progressive causes but would benefit from starting with family, faith, and a strong work ethic, so that we can build a broader coalition of citizens than we may have ever imagined and without whom we can’t generate the political will to make the sweeping changes our country needs.

More than progressive issues, it is Gillum’s values-based approach, his personal story and his willingness to go anywhere and take seriously the concerns of everyone that make him compelling. These are qualities that make his candidacy attractive not just to base Democratic voters but also to a potentially much broader coalition that includes those who wouldn’t typically identify as progressives—he gets standing-room-only crowds even in the most conservative parts of the state.

Instead of debating whether we need to look for a political “center” or play to the left, Gillum has successfully demonstrated the power of being willing to engage with voters who—for a variety of reasons—feel cynical, alienated, enraged, or defeated, regardless of where they live in the state or what they look like. It is not a question of playing to the left, right or center, as those labels often obscure more than they reveal, but about going deeper. These Americans are not a cohesive voting bloc, and often don’t see each other as allies. They are a surprisingly broad constituency looking for a political home—with whom, given the right values, a coalition can be built.

There have been three central pillars to Gillum’s appeal to these voters. These pillars have been overlooked by too many commentators, who have fallen into the “centrist-versus-democratic socialist” trap. Instead, progressives should be paying attention to Gillum’s three pillars, which transcend this dichotomy:

1. Family. For most Americans, family will always be the single most important factor in their lives—yet Democrats are often hesitant to lead with a call for strengthening families. As a result, it’s a territory that conservatives have come to own.

Gillum, by contrast, has put strengthening families front and center. He has emphasized the example of his parents as role models, regularly invokes the advice given to him by his mother and grandmother, and features his wife and children right beside him on the campaign trail. This kind of genuine, personal focus on family is an effective way to engage voters who, despite what progressives might hope for, do not see themselves included in rhetorical calls for economic justice, workers’ rights, and fighting corporate greed.

In numerous discussion groups I have led with conservative union members about the value of organized labor, I have seldom heard mention of workers’ rights and economic justice—terms often used in progressive circles. Instead, members often speak of how being in a union has enabled them to provide for their families, allowed their wives to see a doctor, let them be available on the weekend to attend a little league game and given them the wherewithal to take their kids on vacation. Thus, union rights—one of the central causes of progressivism—is understood not in terms of progressive ideals, but rather the traditionally conservative rhetoric of family stability. For them, it’s about family first and foremost.

2. Faith. Gillum is openly religious and frequently talks about his grandmother’s faith and how it influenced him throughout his life.

Her prayer, Gillum says, was that God would guide him not just in bettering himself, but in applying his success to bettering his community. The “bring it home” refrain has become the campaign’s unofficial mantra. Like the uplifting calls of other successful campaigns—“yes we can!”—it points to a faithful hope for positive change that is informed by common good values and can be shared by a broad and diverse coalition of voters.

Too often, though, progressive candidates shy away from religious themes altogether, bringing instead a secular frame that focuses on the so-called bread-and-butter issues—jobs and the economy—especially when speaking with conservative voters. This is a mistake. For voters who seek to understand their world through a religious framework, there is often no distinguishing between economic issues and social issues. For these voters, whose faith informs their politics, the two are inextricably linked.

For example, a voter who sees herself living within a moral framework is unlikely to be moved by a candidate who tells her they want to stay away from “those social issues.” In fact, they have inadvertently created a credibility gap by suggesting there is a conversation outside the moral frame, and what is revealed is that the candidate must not have a solid moral frame or else they wouldn’t be trying to move “outside” it for the conversation.

When we try to distinguish economic issues as separate and apart from those issues more commonly understood as “social issues,” we inadvertently degrade one side of that equation. Either the issues can’t matter much, these voters reason, or progressives’ morality is optional, as they think you can sort through the pressing issues of the day without applying a moral code. Either way, swing voters to whom progressives should be appealing most end up viewing the party with skepticism, due to its failure to relate to something that is often most central to their identity: faith. Gillum has shown that this needn’t be the case. Progressives would do well to follow his example.

3. Hard Work. When he won the primary, Gillum’s victory speech focused on the struggles of working families: “If you work 40 hours a week,” he said that night, “you should be able to make ends meet without having to work two or three jobs.” Putting a shared work ethic front and center is not just a powerful tool for deflecting the common assertion that Democrats are more concerned with those who don’t work than those who do—it is a values-based assertion that makes sense.

In the course of my time working with conservative union members, I’ve seen this concern voiced time and again: “I’m the working stiff who still plays by the rules,” the argument goes, “and while I’m working hard, other people—including members of my own family—are gaming the system and expect someone else to take care of them.”

Even the emphasis on raising the minimum wage to $15 per hour can fall flat with these voters. Take for example Karen, a conservative union member who works as a nurse in a state corrections system for $21 per hour. Karen’s wages are set through a state bargaining system, she told me, and she fears raising wages for unskilled workers will undermine her buying power and the investment that she made to put herself through nursing school.

“Even if the Fight for $15 did benefit me indirectly, I’m left asking, who is working for me? Where’s the agenda that makes it easier for skilled workers like me to get by and get ahead?”

Despite this type of resistance among conservatives to a social justice-based argument for raising wages, there is near-unanimous support for it when tied to more traditionally social issues and when the wage target is explained in terms that make sense to them. Highlighting to these voters that it is more and more difficult for hardworking Americans to get by; that the breakdown of the family and the declining work ethic make it more challenging all around; and that wages haven’t kept pace with inflation for half a century resonates in a way that traditionally progressive rights and justice-based appeals don’t. Framed in these terms, conservative union members have told me, “Let’s close that wage gap, and help our families stay strong.”

Democrats’ long-term political majority will come from a strategy that targets not just those Americans looking to get to $15, but also those who are already there, with solutions that aren’t just economic but focus equally on issues that are typically seen as being questions of morality or ethics.

Gillum’s victory points to a socio-political-economic worldview that appeals not just to the usual Democratic voters, but also to many others who have felt left behind by today’s politics.