We Can Change Politics - And Ourselves - by Canceling Student Debt 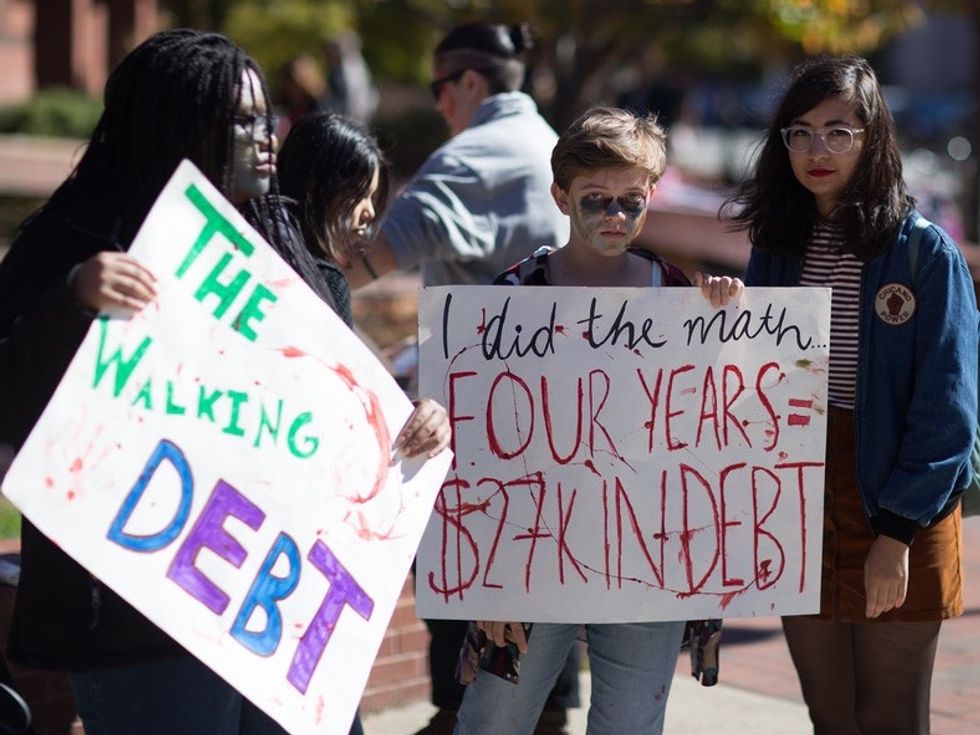 New research sponsored by our organization, Freedom to Prosper, shows that student debt cancellation has the potential to remake the political landscape in 2018 and beyond, while freeing millions of Americans from a student debt trap that diminishes all of us.

How did we get here?

It began with a story. It wasn’t an unusual one. In fact, 44 million Americans with student debt can tell their own versions of it. But it was new to two of us when we first heard it from our daughter, four years ago. It was the story of a gifted young artist, a single mother who was forced to set aside her dreams and her gifts to work a retail job so that she could pay back her student loans.

Student debt? One of us had founded a graduate school to foster a new generation of business leaders, dedicated to the human values that build lasting prosperity for all. The other built a clothing business that endowed educational funds for the college-bound children of its employees.

Until we heard this young artist’s story, however, we had never seen student debt from a first-person perspective. It was then that we realized that our business students were taking on debt that often prevented them from working in the altruistic, but often less well-paying, fields for which they were trained. And we quickly realized that our company’s education fund, while very generous by most standards, was not nearly enough to keep students from becoming enmeshed in debt.

We learned that today’s student debt was preventing millions of young people from pursuing their dreams, fulfilling their ideals, even from forming households and making a start in life. As we read, and learned, it felt as if a dark curtain had been drawn across the future for an entire generation.

We wondered how this had happened. It was still possible to graduate without student debt when we went to college (and, in one case, to law school) in the 1960s and 1970s. One of us is a graduate of the University of California, Berkeley. The other attended both Berkeley and UC’s Hastings School of Law. Our tuition cost hundreds, not thousands, of dollars per semester.

We learned that today’s student debt is a recent invention, born of Wall Street lobbying, political compromise, and a misplaced faith in the power of the private sector. This nation has a long history of investment in public education at all levels—as a public good, not as a form of personal indebtedness.

We came to feel that student debt was tearing at the fabric of society. We were asking millions of people today to shoulder a burden those who came before them had not been asked to carry. Its very existence was a challenge to the ideal of e pluribus unum—that we are all in this together, made one out of many.

From the first investment in public primary schools to the development of land grant colleges in the 19th century, we have understood that education is an investment given to all, for the sake of all. We came to believe that the best and fairest way to address the injustice of student debt, and to reaffirm our commitment to each other as members of the national community, is by canceling the debt—altogether, and in full.

That’s why we are proud to announce the creation of a new organization, Freedom to Prosper, dedicated to this idea. The organization is named Freedom to Prosper, in part to recognize that, as a breakthrough economic study recently found, removing this student debt trap will foster economic growth and create more than 1 million jobs per year for several years. That will bring prosperity to people in all walks of life, at all income levels, and throughout the United States.

A Turning Point for Turnout

This week we are releasing a major project, conducted by Data for Progress, that shows us how this idea has the potential to change politics.

Recent polling from Data for Progress shows that there is strong support in many parts of the country for canceling student debt. DFP polled voters on proposed legislation to cancel student debt and revoke the Trump tax cuts, and found it had net positive support (more supporters than opponents) nationally and in most states.

A Map to the Future

Data for Progress, working with Freedom to Prosper, also developed an interactive map of student debt by state and congressional district. This map measures student indebtedness (as reported to the IRS) for geographic area, weighs that against economic conditions in that area, and creates an index that measures its student debt burden.

This is not just a map of the student debt burden. If used properly, it is a map to our political future. It shows us—state by state and district by district—how Democrats, as well as progressive independents and Republicans, can win elections all across the country. (Conservatives are also welcome to run on a platform of student debt cancellation.)

This tool is designed to educate everyone—politicians, activists, and voters—about student debt.

Some have argued that student debt cancellation would only benefit well-to-do, white Americans. Research has shown, however, that student debt strikes minority communities the hardest. Only about one in six student loans cover graduate school. While the dollar amounts of those loans are high, so is the social cost: These borrowers are doctors and other professionals who are often forced into higher-paying but less vitally needed specialties to pay off their loans.

(The truly wealthy don’t typically assume student debt, since they’re likely to have the money on hand to pay for an education.)

People have argued that canceling student debt will create a “moral hazard”—that students would accumulate more such debt in the future, on the assumption that it, too, would be canceled. But we believe that the movement for tuition-free public higher education, a sister campaign to ours, will succeed. Future students, especially those who attend private institutions, will understand that their debt is their obligation. Public college used to be tuition-free, and society did not suffer because of it. In fact, quite the opposite was true.

That leaves us where we began: with a story. But this one is the story of us—all of us. In the generations that preceded us, we saw our society as an engine for progress. We believed that each generation would have a better life than those who came before it. We saw education as part of that better life, and as a way to help us all learn and grow together.

Here, too, there is evidence to support our beliefs. Research has shown that, in cities with better-educated populations, wages also rise for people who didn’t attend college.

The economic evidence is compelling. In the end, however, ours is a moral argument. We believe that it is unfair to punish anyone for pursuing their dreams. We believe that we can reaffirm our bonds of community—the bonds between generations, and the bonds among our diverse communities—by freeing millions of Americans from the student debt trap. As these new reports show, this issue also has the power to reshape our political future.

We hope you will join us, along with other fine education activists, in the campaign to end student debt.

For more information, please go to Freedom to Prosper.