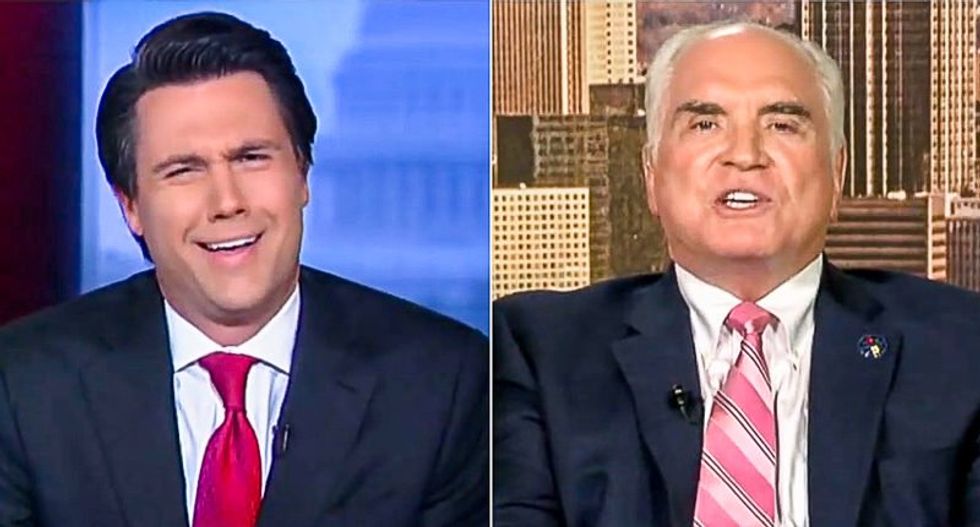 Fox News host Leland Vittert called out Republican Rep. Mike Kelly (R-PA) on Sunday after the congressman refused to concede that his party had a role in the bitter partisanship in Washington, D.C.

In a Sunday interview, Vittert told Kelly that Democrats are accusing Republicans of ignoring a “huge” part of the population which has not been able to take part in the country’s economic progress.

“It’s not about Democrats or Republicans,” Kelly insisted. “It’s about Americans.”

“Congressman,” Vittert interrupted. “You can’t say it’s not about Democrats and Republicans.”

“Of course, I can,” Kelly shot back. “Because it’s the truth. You hear Corey Booker — Spartacus — talking the way he’s talking… I believe in the United States of America, not the divided states of America. We need to become more statesman.”

“This idea that you can continue to divide America,” Kelly continued, “in every way, in every day is a positive message. Come on.”

Vitert pressed: “Congressman, you’re a big supporter of the president. There are few people who have divided America more on the issue of partisanship than the president of the United States. Right or wrong, that’s what he’s done.”

“Thank you,” Kelly snapped back sarcastically. “That’s not the truth and you know that.”

As the congressman continued to rant, Vittert laughed in his face.

“I get it,” Kelly answered cryptically. “I’m going to answer you very directly. Have you ever seen America in better shape than it is right now?”

“Alright,” Kelly grumbled. “I’ll tell you what the Republicans share in — and the Democrats should share in — is the success that America is witnessing right now. And when you talk about partisanship, what part of partisanship are you talking about?”

“I mean, the reality of this all is messaging is critical,” he added. “And the interpretation of the message that’s out there. We’re running on the most dynamic and robust economy the country has seen.”

“Trying to divide us is a good idea,” the congressman noted.

“Isn’t that how the president got elected?” Vittert observed. “By dividing and by bringing out and inspiring the Republican base?”
“No,” Kelly answered.
“Really?” Vittert said.