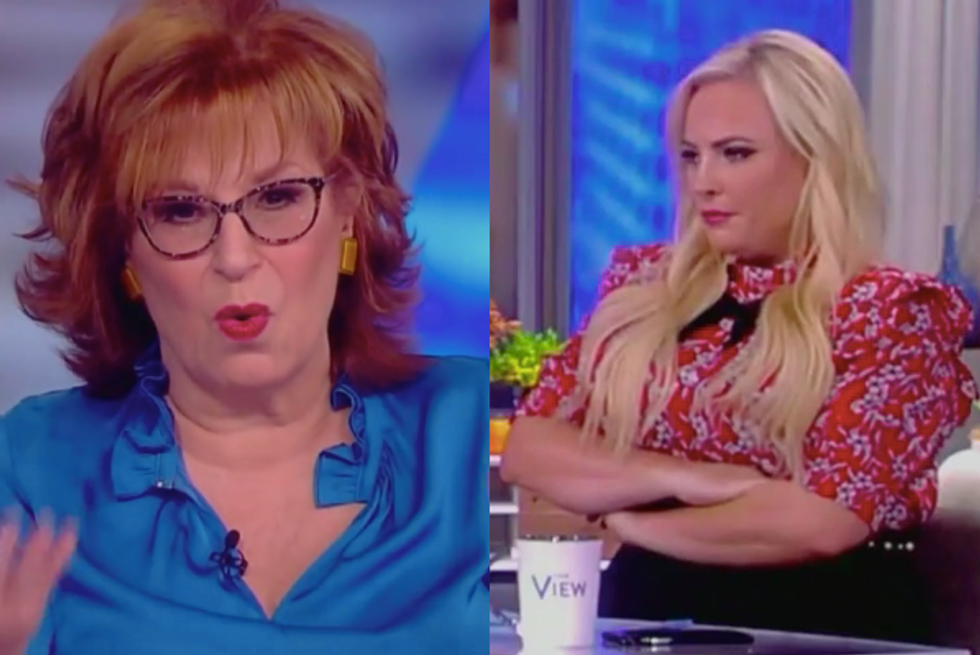 On “The View” Monday, Meghan McCain tried twice to call out Joy Behar for bringing up points she described as “off-topic," prompting Behar to inform her co-host she will talk about whatever she damn well pleases.

In the first segment of the show, the panel was discussing the massacre Saturday at a Pittsburgh synagogue that left 11 worshippers dead. Behar suggested that a change in gun laws is needed to curtail mass shootings in America.

“I was looking at this list and when you look at shootings with AR-15’s, Colorado, Orlando, parkland, Las Vegas, Sandy Hook, Waffle Fouse, Texas church, San Bernardino and now the Tree of Life Synagogue,” Behar said.

“The Texas church stopped the shooting from happening,” McCain replied. “I didn't think we were going to have a conversation about AR-15s but I'm happy to.”

McCain went on to say that as a legal gun owner she’s “demonized to such a degree” after mass murders before complaining Behar wasn’t paying attention to her.

“You're not even looking at me!” McCain whined.

“Because I'm thinking of the '60s and '70s and how the Black Panthers and the Weathermen had a lot of guns and suddenly the NRA put in gun control,” Behar shot back. “It's interesting, isn't it?”

In the following segment, McCain again concerned herself with Behar’s commentary—this time during a discussion on how much responsibility the media bears  for elevating the language that appears to have triggered bomb suspect Cesar Sayoc.

“The media should stop covering those rallies of [Trump’s],” Behar suggested. “That’s my one recommendation. It just empowers him more.”

“That seems like a logical response to that question,” McCain replied sarcastically. “Come on, we're talking about social media's impact and we jumped to Trump's rallies.”

“I jump to wherever I damn please, okay?” Behar replied. "That’s twice."

“I'm not allowed to change the subject if I want to?” Behar asked.

“I just thought we were talking about social media” McCain said.

“You talk about it then,” Behar replied.