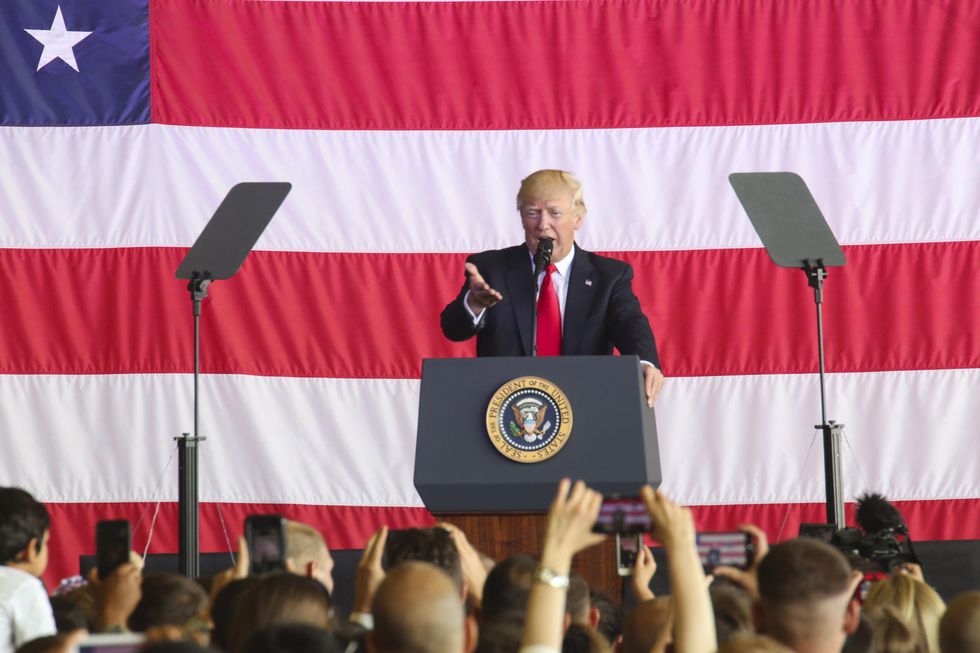 President Donald Trump published a new op-ed Wednesday in USA Today that was quickly derided as a lie-filled smear of Democratic ambitions to pursue Medicare-for-All.

In response to the criticism, USA Today posted a series of tweets defending their decision to publish the op-ed: "[USA Today Opinion] provides a forum for a diversity of views on issues of national relevance. We see ourselves as America’s conversation center, presenting our readers with voices from the right, left and middle," it said.

It continued: "President Trump’s op-ed was treated like other column submissions; we check factual assertions while allowing authors wide leeway to express their opinions. ... Readers are invited to submit opposing viewpoints and provide additional context, some of which will be published in the days ahead."

This explanation falls flat. While opinion sections typically allow for a variety of viewpoints, they should also hold contributors to high factual standards, not give them "leeway."

If the fact-free nature of Trump's op-ed is a standard example of the level of scrutiny such pieces receive, USA Today would be well advised to re-examine its practices.

No op-ed should be published, at the very least, if it will leave a credulous reader less informed than they were to start with. And that's exactly what Trump's op-ed does.

For instance, Trump lied in the op-ed when he said the Medicare-for-All proposal pushed by Sen. Bernie Sanders (I-VT) would reduce seniors' benefits. In fact, Sanders' plan makes Medicare for seniors even more generous.

Even worse, Trump makes the absurd claim that "Democrats would give total power and control over seniors’ health care decisions to the bureaucrats in Washington, D.C.” This is nonsensical in a piece purportedly about defending Medicare, which is already a government-run program controlled by bureaucrats.

In what some might see as a perhaps excusable rhetorical flourish, Trump says Democrats want to "model America’s economy after Venezuela,” which, of course, they don't. But any benefit of the doubt should be abandoned on this point because the fact is that many developed, wealthy nations have national health care systems without becoming Venezuela, the right's new favorite boogeyman. Failing to acknowledge this fact shows the utter weakness of the conservative view of the health policy, and this gross mischaracterization of the progressive approach reveals how desperate they are to distract from the dearth of conservative ideas.

An even more pernicious lie pervades the very premise of the piece: the idea that Trump is keeping his promise to improve health care, while Democrats are proposing a radically disastrous alternative. In fact, Trump has broken his own promise to provide health coverage for every American on the government's dime — the idea he now supposedly disparages — while he and his party are targeting the very programs he pledged to protect.

Since there's no way to credibly defend the factual basis of Trump's op-ed, there's no reason USA Today should have published it. The only responsible solution now would be to retract the piece and apologize to the readers.