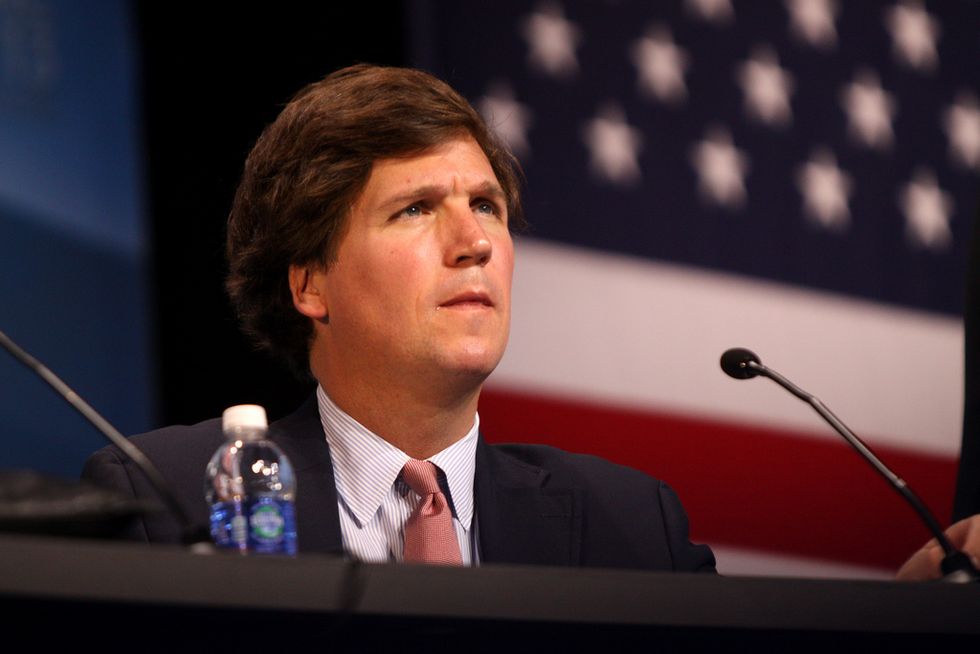 The appointment of Brett Kavanaugh to the Supreme Court has prompted a surge of anger from Democrats, based on his extremist, partisan agenda, repeated lies to the Senate, and the allegations of sexual assault that Republicans swept under the rug by dragging his accusers through the mud.

But to Fox News' Tucker Carlson, the real problem here is how angry Democrats are. In fact, he said on his show on Monday night, the criticism of Kavanaugh is basically like what the Hutu said before carrying out the Rwandan genocide.

"What's actually happening, says [Democratic donor] Tom Steyer, is that Kavanaugh was installed by a specific racial group in order to hurt and disempower ever other racial group in America," said Carlson. "This is tribal warfare posing as democracy and your tribe is losing. That's what Tom Steyer is telling you. Now as a factual matter this is insane. It's the kind of lunacy that would have gotten you booted off a cable channel five years ago. It's also a lie and it's dangerous. It's exactly the kind of things that Hutu leaders in Rwanda were saying in the early 1990s. Responsible people do not talk like this. And yet suddenly it is everywhere on the left. And not just the professional wackos pounding on the front door of Supreme Court. The line between dangerous extremist and U.S. senator are blurring on the left."

The Rwandan genocide of 1994 was one of the most horrific mass killings in modern times. Decades of mounting ethnic tensions led to a government-backed slaughter of the minority Tutsi by the majority Hutu, spurred on by heavily armed militias and by state radio broadcasts directing civilians to slaughter their Tutsi neighbors, friends, and spouses or be killed themselves. As many as 800,000 people were massacred over a period of 100 days, many hacked to death by machetes, and some 250,000 to 500,000 women were systematically raped.

Carlson seems to be implying that Steyer's criticism of Kavanaugh, and his entirely accurate observation that his judicial agenda stands to hurt people of color, might as well be a prelude to white genocide. Steyer, who is white himself, has of course said no such thing. He doesn't even support impeaching Kavanaugh, let alone killing white people who support him.

In recent months, Carlson seems to have grown obsessed with the idea that Democrats are secretly planning a race war — or, at the very least, that their agenda is a mortal threat to white people. He has claimed white people are not "designed" to live around immigrants and has argued that the founding motto of the United States, "E Pluribus Unum," somehow proves diversity does not make America stronger. His frequent guest Mark Steyn has even claimed that an increase in Hispanic schoolchildren means "the border has moved north."

Carlson has no apparent interest in discussing the racial challenges in this country or how Kavanaugh's appointment could worsen them. As far as he's concerned, if you do want to discuss it, you are a violent threat to white people — and you might as well be one of the Rwandan killers.