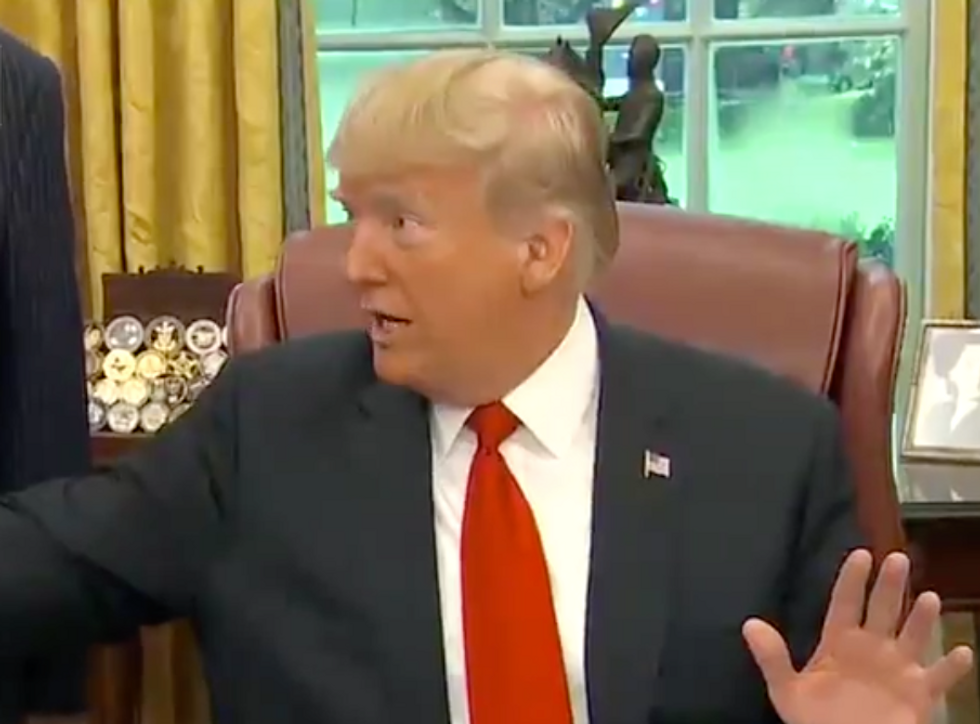 President Donald Trump and his son-in-law Jared Kushner have enjoyed a very friendly relationship with the government of Saudi Arabia and Crown Prince Mohammad bin Salman, a.k.a. MBS. And the connection is more than political: Trump has had business interests in Saudi Arabia since at least the early 1990s. But the Trump family’s relationship with the Saudi royal family has been complicated this month by the disappearance of Saudi journalist Jamal Khashoggi, who was last seen entering the Saudi Consulate in Istanbul, Turkey on Tuesday, October 2. The Washington Post columnist, a frequent critic of the Saudi government and MBS, had been living in exile in Virginia since 2017 and feared that he would be arrested as part of MBS’ crackdown on dissent. And Khashoggi had reason to worry: Turkish government officials are alleging that they have proof of Saudi agents murdering him inside the Consulate and dismembering his body.

The pressure on Trump to stand up to the Saudi government and MBS has been increasing, but his response to Khashoggi’s disappearance has been anemic at best. So far, Trump has ruled out the possibility of sanctions, stressing that curbing arms sales to Saudi Arabia is “not acceptable.” But the Khashoggi scandal isn’t going away—no matter how much Trump and Kushner wish it would—and everyone from Sen. Bernie Sanders on the left to columnist Max Boot and MSNBC’s Joe Scarborough on the right is demanding justice for Khashoggi. Even Sen. Lindsey Graham, who is often quite obsequious where Trump is concerned, has asserted that there “will be hell to pay” if Saudi agents murdered Khashoggi as the Turkish government is alleging.

Here are five reasons why Khashoggi’s disappearance is turning into an international scandal for President Trump.

Turkish government officials are alleging that they have explicit audio and video recordings proving that inside the Saudi Consulate in Istanbul, Khashoggi was interrogated, beaten, tortured and killed before his body was dismembered. The recordings, allegedly made by Turkish intelligence, have not been released so far—the Turkish government is concerned about safeguarding its intelligence methods. And according to Turkish officials, Khashoggi’s murder was planned well in advance: 15 Saudi agents arrived in Istanbul on October 2, intent on murdering him that day inside the Consulate.

Between U.S. intelligence and Turkish intelligence, there is plenty of evidence to suggest foul play on the part of the Saudi government—including MBS. U.S. intelligence has intercepts of Saudi officials discussing a plot to lure Khashoggi back to Saudi Arabia. It is unclear, based on those intercepts, whether the initial plan was to kill him or simply to kidnap him—and according to CNN, luring Khashoggi to the Consulate in Istanbul might have been a backup plan that came about when Saudi officials were unable to get him to return to Saudi Arabia.

3. There Is No Video Evidence Whatsoever of Khashoggi Leaving the Saudi Consulate in Istanbul

The Saudi government has flatly denied that Khashoggi was harmed inside the Saudi Consulate in Istanbul on October 2, insisting that he freely left the Consulate that day after his appointment. But there are no videos whatsoever of Khashoggi leaving the Consulate; there is a video of him entering, but not one of him leaving. After Khashoggi entered the Consulate, his fiancÃ©e, Hatic Cengiz, waited for him outside for 11 hours—and he never showed up. In fact, Khashoggi was visiting the Consulate to obtain proof of his divorce so that he could marry Cengiz.

On Friday morning, October 12, the disturbing headline for a Washington Post article by Ishaan Tharoor read “Trump Chooses Arab Authoritarianism Over Jamal Khashoggi”—and in the article, Tharoor noted that Crown Prince Mohammad bin Salman himself appears to have ordered the anti-Khashoggi plot. Yet even with allegations that Saudi agents lured a U.S. resident and well-respected journalist to the Saudi Consulate, sent agents from Saudi Arabia to Istanbul to either kidnap or kill him, committed a vicious murder in a foreign country and dismembered the body inside the Consulate, Trump has not ruled out the possibility of arms sales to the Saudi government.

5. Trump’s Critics Allege That He Has Encouraged a Rogue Regime to Become Even More Brazen

The Saudi government had a history of appalling human rights abuses long before Trump became president, but in a Washington Post commentary, journalist Robert Kagan asserted that by being so supportive and uncritical of Saudi officials, Trump did a lot to encourage their abuses. Certainly, Trump’s Saudi Arabia policy was a major departure from that of the Obama Administration, which was highly critical of the Saudi government. And on October 9, Kagan wrote that Saudi leaders wouldn’t have made such a “brazen move” as harming Khashoggi if they featured major repercussions from the Trump Administration. Kagan wrote, “Saudi Arabia is a small nation that cannot defend itself without the support of the United States, and therefore, no Saudi leader would have made such a brazen move without confidence that Washington, once the leader of the liberal world order, would do nothing.”