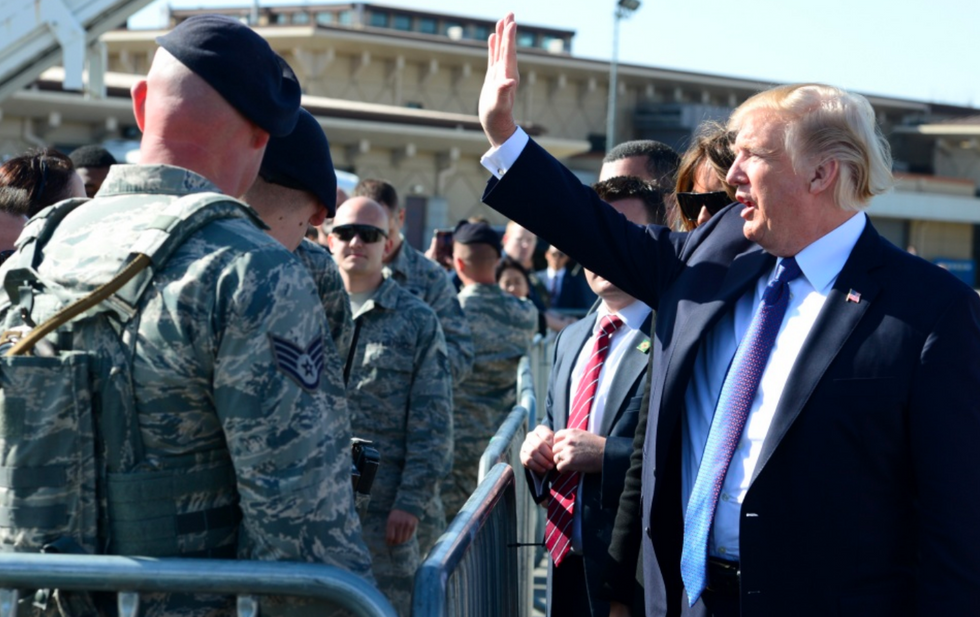 President Donald Trump, despite presenting himself as a champion of America's soldiers and veterans, told the Associated Press on Tuesday that he is too busy to visit a military base in a combat zone like Afghanistan and Iraq.

"Well, I will do that at some point, but I don’t think it’s overly necessary," Trump told the Associated Press. "I’ve been very busy with everything that’s taking place here. We have the greatest economy in the history of our country. I mean, this is the greatest economy we’ve ever had, best unemployment numbers. Many groups are, you know, we’ve never even been close to these numbers. I’m doing a lot of things. I’m doing a lot of things. But it’s something I’d do. And do gladly."

"@gretawire: PresObama is not busy talking to Congress about Syria..he is playing golf ...go figure"

Can you believe that,with all of the problems and difficulties facing the U.S., President Obama spent the day playing golf.Worse than Carter

Later during the interview, Trump returned to the theme that he had been a staunch ally of the military, although he did so as part of a broader response to a question about the budget deficit.

"Excuse me. No. 1, I had to take care of our military. I had no choice but to do it, and I want to take care of our military," Trump told the Associated Press. He later elaborated, "We had to do things that we had to do. And I’ve done them. Now we’re going to start bringing numbers down. We also have tremendous numbers with regard to hurricanes and fires and the tremendous forest fires all over. We had very big numbers, unexpectedly big numbers. California does a horrible job maintaining their forests. They’re going to have to start doing a better job or we’re not going to be paying them. They are doing a horrible job of maintaining what they have. And we had big numbers on tremendous numbers with the forest fires and obviously the hurricanes. We got hit in Texas, Florida, Puerto Rico, Georgia. Georgia was hit very hard this time. Nobody even, you know, treats that one fairly. The farmers got hit very, very hard."

Trump has a long history of making insensitive remarks about America's military servicemen and servicewomen. These included allegedly telling the grieving widow of a Green Beret who died in combat, "He knew what he signed up for... but when it happens, it hurts anyway." He also insulted Sen. John McCain, R-Ariz., by saying that "he was a war hero because he was captured. I like people who weren't captured" and responded to the Gold Star parents of a Muslim soldier who died in combat that he had sacrificed like their son because he had created "thousands and thousands of jobs."