Trump’s ‘Algorithms’: Here Are 4 Bogus But Effective Themes That Whip the President’s Supporters into a Frenzy 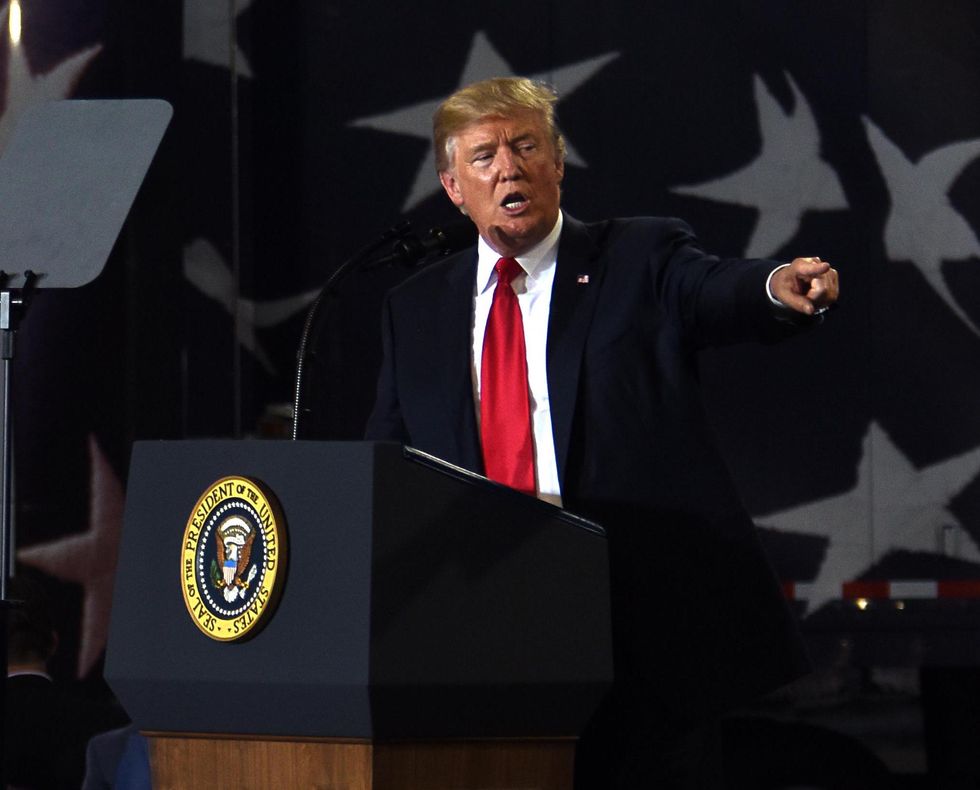 Although Joe Scarborough—the ex-Republican and former Florida congressman who now hosts “Morning Joe” with Mika Brzezinski on MSNBC—has been one of President Donald Trump’s most prominent critics on the right, he offers some valuable insights when it comes to explaining Trump’s appeal. Scarborough dislikes Trump vehemently, stressing that he believes the president has been terrible for the GOP and the conservative movement. But Scarborough is also quick to point out that Trump can be really effective when it comes to rallying his base.

Rather than relying on polls, Scarborough told Brzezinski during their October 4 “Morning Joe” broadcast, Trump rallies his base by employing “algorithms.” One could also describe them as recurring Culture War themes or messages, but whatever one calls them—and however ludicrous they might seem to his critics—they rally his hardcore base in a big way.

Here are four algorithms, as Scarborough calls them, that Trump uses to rally his delusional base.

1. Masculinity Is Under Attack in the U.S.

So far, three different women—Christine Blasey Ford, Deborah Ramirez and Julie Swetnick—have come forward with sexual abuse allegations against Trump’s Supreme Court nominee, Judge Brett M. Kavanaugh. And instead of encouraging a dialogue on sexual misconduct, Trump has painted Kavanaugh as not only the victim of a Democratic Party witch hunt, but also, as a victim of a liberal campaign against masculinity in general. Trump is great at conflating criticism of sexual misconduct with attacking the overall male population, and the men-under-attack theme is an effective tool for rallying his base.

2. Christianity Is Under Attack in the U.S.

Trump is hardly a religious scholar, but when it comes to the Christian Right, he knows what buttons to push—and one of them is the Christianity-under-attack theme. Barack Obama, as president, was hardly anti-religion; he obviously knows a lot more about the Bible than Trump and has spent much more time attending church. His rhetorical style even incorporates elements of the African-American church experience. But Obama embraces a non-fundamentalist form of Mainline Protestant Christianity that stands in stark contrast to the Christian Right, white nationalism and prosperity theology. And when Trump plays the Christianity-under-attack card, it rallies the far-right white fundamentalists in his base. Mark A. Thiessen, a former speechwriter for President George W. Bush, has exalted Trump as the U.S.’ “most pro-religion president”—which is a ridiculous statement, yet shows how effective Trump can be at manipulating the Christian Right and wrapping them around his finger.

3. Immigrants Are the Enemy

Trump’s supporters would argue that he isn’t xenophobic or anti-immigrant, only pro-American. But his actions speak otherwise, whether he is denouncing El Salvador and Haiti as “shithole countries,” pushing for a border wall or separating families at the border. And that intense nationalism plays to the fears of Trump’s hardcore base, who blame immigrants for their economic worries.

4. Democrats and RINOs Don’t Want to ‘Drain the Swamp’

Trump rallies his base not only by attacking Democrats, but also, by lambasting so-called RINOs: Republicans in Name Only. “The swamp” is Trump’s term for the corrupt, elite Washington D.C. establishment, which in Trumpspeak, consists of both Democrats and NeverTrump Republicans—and whenever he is criticized by either a Democrat or a NeverTrump Republican, Trump will claim that they resent his insistence on “draining the swamp.” To Trump, “the swamp” could be anyone from Sen. Dianne Feinstein to anti-Trump conservatives such as Scarborough or veteran columnist George Will. And whenever Trump rails against “the swamp,” his supporters applaud wildly.