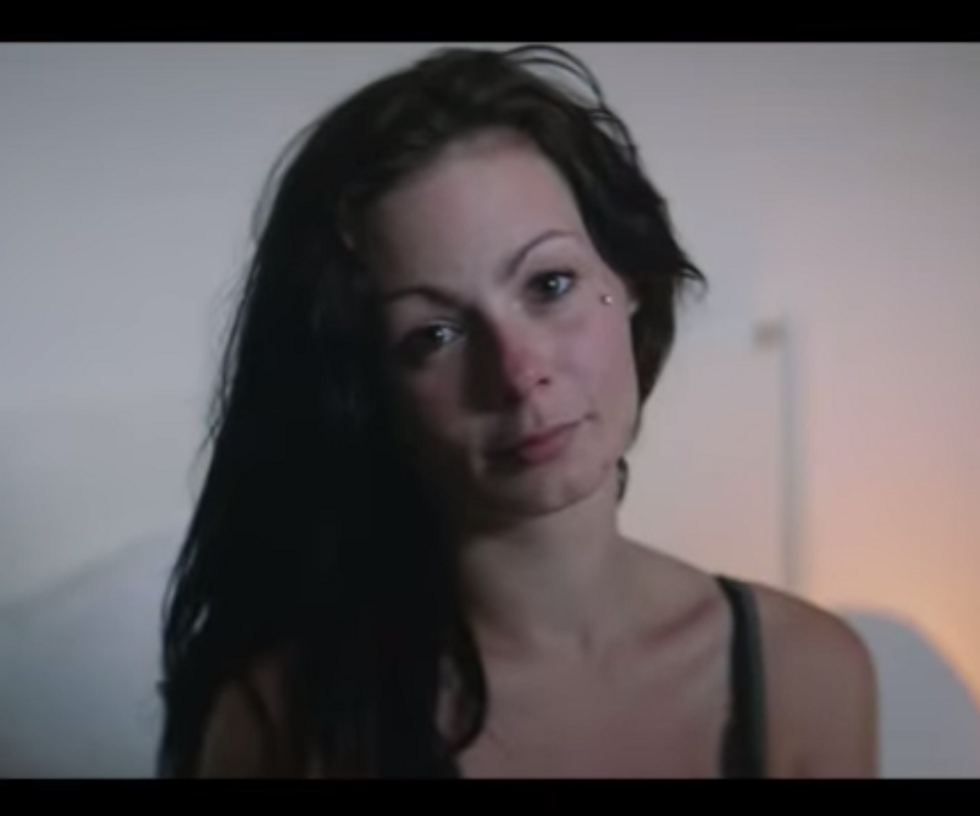 A new campaign—from the White House Office of National Drug Control Policy (ONDCP), the Truth Initiative and the nonprofit Ad Council—has live-streamed a woman’s detox from opioids in a cubic “treatment box” to NYC passers-by. It then released a video including clips of the woman’s detox, interspersed with melodramatic music, commentary from “experts” and pedestrians’ gawking reactions.

It’s all part of a larger campaign titled “The Truth About Opioids.” Ironically, that’s the opposite of what this stunt delivers.

“It’s wrong in about every possible way it could be wrong. It’s really bizarre,” says Maia Szalavitz, addiction journalist, Filter contributor and author of Unbroken Brain: A Revolutionary New Way of Understanding Addiction.

So what’s the problem? First, the choice to center withdrawal for shock value is misguided. The video opens with the young woman, Rebekkah, writhing and moaning (accompanied, of course, by the sound of a heart pounding). Stark text announces “Opioid Withdrawal Day 01,” followed by a list of symptoms. “This drug addiction has taken everything and everyone I’ve ever loved away from me,” she says. “Everything.”

“I’m the most camera-shy person in the world,” says Rebekkah, “but if making my detox public is gonna help somebody, even literally just one person, I’m all for it.”

Unfortunately, as Szalavitz reminds us, “There’s no evidence that scare tactics prevent people from becoming addicted.” Both ONDCP and the Truth Initiative (best known for its anti-smoking ads) have long legacies of employing such tactics.

ONDCP was formed in 1988 under President Reagan, during Nancy Reagan’s “Just Say No” campaign. It has a history of investing tons of money in ineffective anti-drug ads. In 2006, the Government Accountability Office concluded that the $1.2 billion spent by ONDCP on anti-drug ads “was not effective in reducing youth drug use, either during the entire period of the campaign or during the period from 2002 to 2004 when the campaign was redirected and focused on marijuana use.” Ironically for an office focused on addiction, ONDCP suffers from its own—persisting in spreading inaccurate and useless messages, despite clear negative consequences.

The new video “doesn’t even mention that actually the most effective treatments for opioid addiction do not require you to go through withdrawal,” says Szalavitz. “And those treatments are methadone and buprenorphine used long-term. There is no reason to focus on somebody suffering withdrawal … The thing that people don’t understand about addiction, they think if people can just get through withdrawal, they’re cured.”

Misleadingly, the video portrays getting through withdrawal as an end point. “This woman implies this is the first time she’s ever been through withdrawal, which is extremely unlikely,” says Szalavitz, who has written about her own experiences with addiction as a young person. “I probably did it fully six times. The problem is not gettingoff, it’s staying off.”

The video makes it seem like withdrawal is the hard part, while ignoring the underlying reasons many people use drugs to begin with. “If the reason you are using opioids is because you have psychological conditions and they help you feel better,” says Szalavitz, “and if you don’t deal with whatever that is and [learn how to] cope with it, you’ll end up relapsing.”

In fact, at one point in the video Rebekkah does say, “I have a lot of self-image issues and my mind doesn’t tell me anything nice.” But the video does not make any reference to therapy or other plans to address underlying mental health struggles.

“This young lady is at extremely high risk of relapsing at this very moment,” says Szalavitz. “She has lost her tolerance to opioids, is not being given effective medication and this suggests that the only way [out of addiction] is to go through a ‘spiritual void’—do we talk about this with any other illness? Do we show cancer patients in the worst part of chemotherapy?”

With it’s abstinence-only, “just say no” mentality, the video feels outdated: “You could have seen this exact same video in 1988,” Szalavitz says.

In addition to its reliance on shock-and-scare tactics, another problem is the video’s singular focus on a young, thin, white woman who conforms to the dominant culture’s beauty standards. She says she started using opioids at age 14 after she hurt her ankle during cheerleader practice, and was prescribed pain pills by her doctor. This innocent white middle-class victim narrative is perfected by the end of the video, when Rebekkah says wistfully: “I want that white picket fence.”

At one point in the video, “Dr. Reitman,” an “addiction specialist” chimes in to hit home the point that this is happening to a white, middle-class attractive cheerleader: “Her addiction really started very innocently,” he says.

The video props up the idea that addiction only deserves our attention and compassion when it affects white middle- and upper-class families, who, unlike people of color or poor white people, are not to blame for their struggles. According to Szalavitz, it’s “The innocent white narrative, I didn’t do anything wrong, my doctor gave me this—and boom, I was shooting heroin.”

Beyond indulging in racist and classist tropes, the video sends an inaccurate message about how addiction usually works. It hammers home the idea that young, innocent Rebekkah was somehow tricked into addiction—”I trusted my doctor to take care of me and make me better” she says sadly. “The decision to go the doctor and not get the surgery—that’s the worst decision i made in my whole life.”

This perpetuates the media’s beloved myth about the opioid crisis; one that has stubbornly persisted despite all evidence to the contrary. As Szalavitz wrote in “What the Media Gets Wrong about Opioids” for the Columbia Journalism Review in August:

The “relatable” story journalists and editors tend to seek—of a good girl or guy (usually, in this crisis, white) gone bad because pharma greed led to overprescribing—does not accurately characterize the most common story of opioid addiction. Most opioid patients never get addicted and most people who do get addicted didn’t start their opioid addiction with a doctor’s prescription. The result of this skewed public conversation around opioids has been policies focused relentlessly on cutting prescriptions, without regard for providing alternative treatment for either pain or addiction.

The majority—80 percent—of people with addiction start by using drugs that were not prescribed to them, typically obtained from a friend or family member. “I would like to know how [Rebekkah] knew where to find heroin when her pain prescription ran out,” Szalavitz says. “Most pain patients don’t do that, don’t have a clue … 70 percent of people who develop opioid addiction have used drugs like cocaine and methamphetamine in the past. For a naive user, never having bought drugs on the street, to go straight to buying heroin on the street is very unusual. Only 3.6 percent of people who have opioid addictions ever try heroin.”

That’s not to say that pharmaceutical companies are blameless—companies like Purdue lied about Oxycontin. But the myth that most people get addicted to heroin through legally prescribed opioids has severely hurt pain patients by forcibly cutting them off from medication they need. It also suggests that people who start using in other ways may deserve blame.

The problems with the video don’t end there. Rebekkah’s fedora-wearing recovery coach, Blythe, adds some words of wisdom about the causes of addiction: “[Rebekkah] is spiritually void and that’s ok—that’s where she’s supposed to be.” She also reinforces Rebekkah’s white innocence, saying euphemistically: “this disease does notdiscriminate at all…it doesn’t matter what town you live in.”

Blythe begins crying, and makes clear the connection between her own past addition, Rebekkah’s current struggle, and the path of recovery that she hopes Rebekkah will follow: “Today I have a life— I’m free.”

But as Szalavitz points out, the recovery coach narrative is another way the video goes wrong. “Their only vision of recovery is that recovery coach,” she says. “If I were to make a commercial for recovery, I would show people in jobs that are not related to recovery. A lot of people in active recovery don’t want to become that, and most people in addiction don’t go on to become counselors or coaches. There’s nothing wrong with doing that important work. But you want to show recovery in its variety, not just the stereotype.”

Szalavitz stresses that she’s not blaming the woman in the video. “She believes she is doing the right thing.” Rather, it’s ONDCP and the companies behind the campaign that are to blame. “I think it’s exploitative to put somebody in literally the earliest moments of recovery on display like that. I don’t know how much money they spent on this; it does not look cheaply produced, it must have cost something to rent that little weird box in the middle of the city. All that could have been spent on naloxone, medication treatment to people who need it.” (The video is one of a four-part “multi-million dollar” campaign funded mostly by Facebook, Google, YouTube, NBC Universal, Amazon, Vice and Turner.)

Szalavitz and others have been trying to push back against the incorrect narratives around the opioid crisis perpetuated by the media. But a campaign like this is disheartening to say the least. “It drives us mad to see we’re just repeating the same thing over and over,” she says.

The video urges: “Know the truth. Spread the truth.” We can do so by fighting back against this campaign.