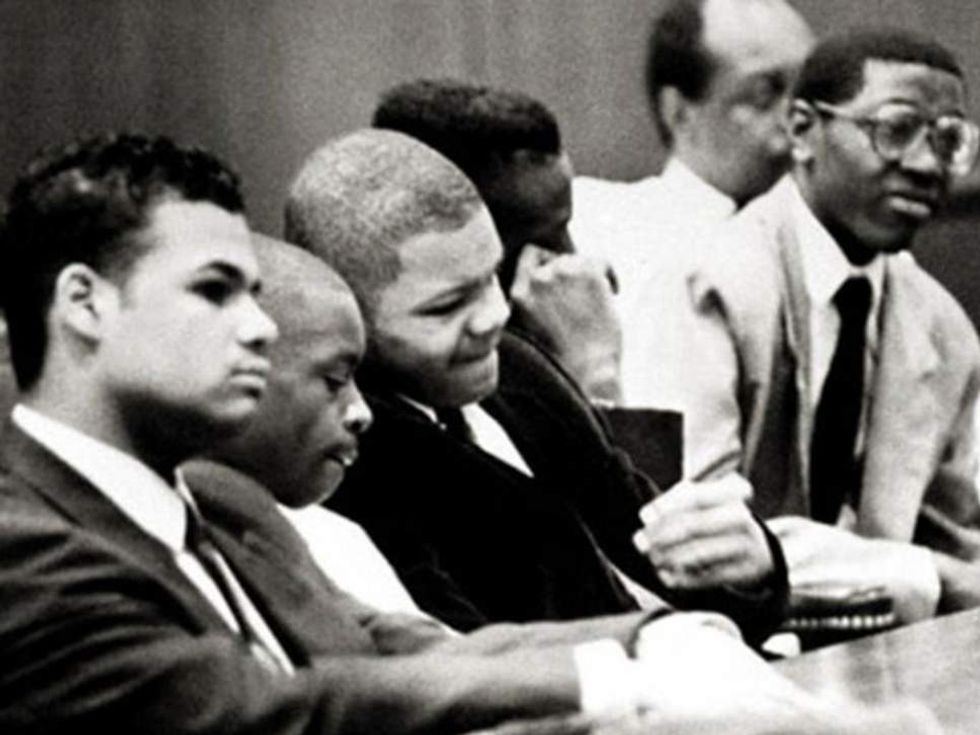 "I think that it's a very scary time for young men in America when you can be guilty of something that you may not be guilty of," Trump said Tuesday afternoon outside the White House. "This is a very difficult time." [...]

"You could be somebody that was perfect their entire life and someone could accuse you of something," Trump told reporters Tuesday afternoon. "You are truly guilty until proven innocent."

At the rally in Southaven, Miss., on Tuesday night, Trump went further.

It is quite surprising to see Donald Trump suddenly develop sympathy for people falsely accused of sexual assault.

It is not, however, a shock that his sympathy only manifests itself when the accused is a rich, Republican, middle-aged, white man.

Back in 1989, Trump had no fear of shattering lives. In fact, he led a lynch mob, taking out full page advertisements in every New York paper demanding that the death penalty be applied in the Central Park Jogger case.

The NYPD had arrested five black or brown children between 14 and 16 to demonstrate speedy progress after a horrific assault that led a young woman fighting for her life. NPYD detectives forced confessions, in the absence of lawyers or parents, from 4 of the 5 children.

Reflecting on that moment decades later, one of the young boys, Yusuf Salaam said:

“He was the fire starter,” Salaam said of Trump, in his first extended interview since Trump announced his run for the White House. “Common citizens were being manipulated and swayed into believing that we were guilty.” — www.theguardian.com/...

Yusef Salaam, Kevin Richardson, Korey Wise, Antron McCray, and Raymond Santana, the five children who were falsely accused of rape and assault by Donald Trump were eventually exonerated in 2002. No physical evidence had ever tied them to the victim or the scene, but they’d been convicted nonetheless, on the basis of coerced confessions extracted by an out of control and inept NYPD. Over a decade after their convictions, DNA evidence implicated a known sex offender. NYPD detectives had botched the case and let a dangerous rapist roam free for years. The city paid tens of millions in a settlement to the Central Park Five, who spent most of their youth behind bars on false charges.

The five children spent between 5 and 15 years in jail. Their lives were shattered by Donald Trump, his ego, and his racism. He was the fire starter.

Compared to the hell they went through, Kavanaugh’s been treated with kid gloves. All people are asking for, is a full investigation of the allegations. This apparently, is a bridge too far for the man who was baying for the execution of five children on false charges not that long ago.

What’s the worst that’s happened to Kavanaugh? The world’s found out how cruel he was to male friends with stutters and female friends who went to dances with him? His carefully cultivated choirboy image has been shattered now that his classmates confirm he was an aggressive, belligerent drunk in high school and college? He’s having to privately grapple with his behavior while allegations of sexual assault against him are being investigated?

Is that it? Is that what Donald Trump and his whiny nominee are complaining about?

Try being 14 years old and having the NYPD rough you up to extract a false confession from you. NYPD detectives in an interrogation room in the 80s with a young black child are nothing like 21 senators asking questions of a middle-aged appeals court judge looking for a promotion.

Try having a powerful billionaire take out full page ads demanding your execution. Has anyone done that to Kavanaugh?

Try having the entire machinery of the law work to imprison you for a crime you didn’t commit.

That will shatter your life.

And despite all that, the Central Park Five survived, and have acted with grace.

Here’s the worst thing, Trump has never been held accountable for his false accusation and a calculated attempt to rally a lynch mob in service of his own ego. Even in 2016, fourteen years after their exoneration, Trump said he still believed the five boys were guilty. Despite the DNA evidence, despite the eventual confession from the rapist, despite the DA withdrawing all charges, and despite the eight figure settlement.

This is the man who now sheds crocodile tears for “sons” and “husbands”.

And that, in the end, is why the estate and income tax fraud story the NY Times printed yesterday is so important. That’s the story we need to amplify. Donald Trump isn’t where he is because of talent. It’s because his daddy gave him several hundred million dollars and bailed him out repeatedly. He cheated and still cheats on taxes. It’s because he believes taxes, and laws, are something only the little people bother with.