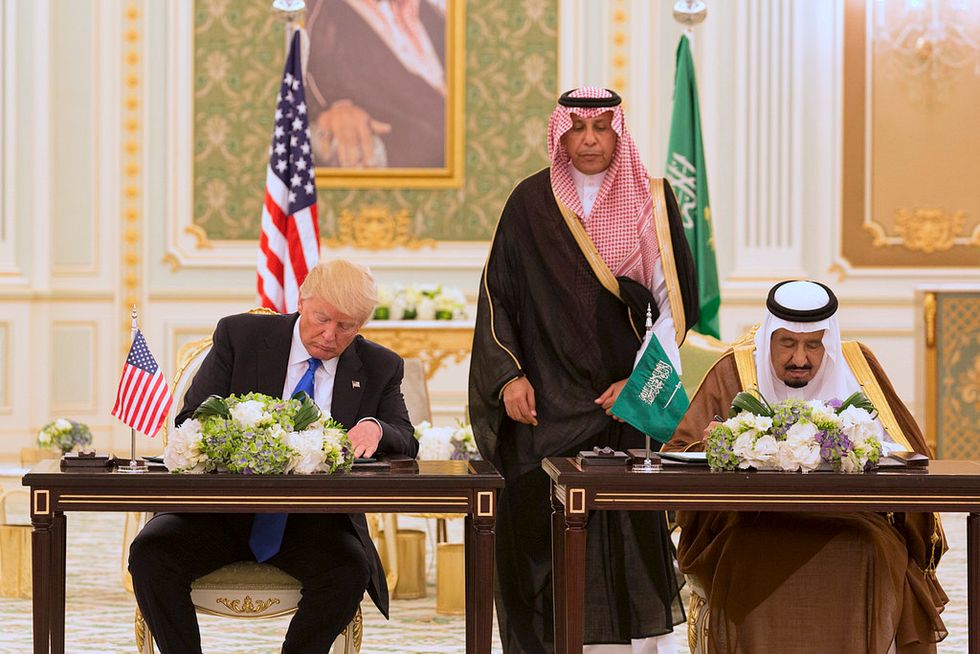 Some Republicans have been very outspoken over the disappearance of Saudi journalist and Washington Post columnist Jamal Khashoggi, who was last seen entering the Saudi Consulate in Istanbul, Turkey on October 2 and was allegedly tortured and killed by a Saudi hit squad. Sen. Lindsey Graham has called for the U.S. to “sanction the hell out of Saudi Arabia,” describing Crown Prince Mohammed bin Salman, a.k.a. MBS, as a “wrecking ball” who is terrible for U.S./Saudi relations. Meanwhile, Sen. Marco Rubio declared that there will be a “complete revolt against our policies with Saudi Arabia” on Capitol Hill if MBS ordered the murder of a U.S.-based journalist. President Donald Trump, however, has been reluctant to criticize the Saudi royal family—repeatedly noting they have denied having anything to do with Khashoggi’s disappearance. And some of Trump’s sycophants are so determined to carry the president’s water that they have responded to all the outrage by defaming Khashoggi, including Pajamas Media Co-Founder Roger L. Simon and Fox News’ Harris Faulkner.

In an October 16 article that ran with the headline “Trump Takes the Right Position (Again) on Khashoggi,” Simon jumped through hoops to defend Trump’s anemic response to Khashoggi’s disappearance. According to Simon, Trump is “being smart not following the herd”—the herd being the long list of people, both left and right, who are horrified by allegations that Saudi agents, acting on orders from Crown Prince Mohammed, lured a Washington Post columnist to the Saudi Consulate in Istanbul, tortured him, murdered him and dismembered the body with a bone saw.

According to Simon, Khashoggi’s disappearance is no great loss. The Pajamas media co-founder wrote, “The disappeared so-called journalist— actually a lifelong activist for the Muslim Brotherhood, the Islamist organization that sought, and still covertly seeks, world domination through the likes of Osama bin Laden and Ayman al-Zawahiri—is scarcely someone to be admired, even with his Washington Post byline.”

Simon added, “Mr. Bezos, please explain why a man with this history is writing for your newspaper.” The Bezos he is referring to is Jeff Bezos, the Amazon CEO who bought the Washington Post in 2013 for $250 million.

Meanwhile, some Trump apologists at Fox News have been trying to disparage Khashoggi via what has been described as a “whisper campaign”—in other words, efforts to discredit him here and there. One of them is Harris Faulker.

During a panel discussion on Fox News’ “Outnumbered,” Faulkner tried to discredit Khashoggi by saying that he was “tied to the Muslim Brotherhood.” And her colleague Marie Harf responded, “That’s iffy to say that….People are saying that to discredit him.”

Another Trump sycophant, far-right AM talk radio host Rush Limbaugh, has tried to paint Trump’s pathetic response to Khashoggi’s disappearance as the work of an astute statesman. In one his ridiculous rants, Limbaugh claimed, “Donald Trump is keeping his eye on the ball, keeping his eye on the geopolitical ball, the national security ball. He’s not going to get sidetracked by what happened to a journalist, maybe, in the consulate there.”

Corey A. Stewart, the far-right white nationalist and Confederate sympathizer who is running against Tim Kaine in the Virginia Senate race, has insisted that “Khashoggi was not a good guy himself.” Being an avid Trump supporter, Stewart is always happy to defend the president at every turn—that is, when he isn’t gleefully celebrating the history of General Robert E. Lee or Stonewall Jackson.

But neocon Bill Kristol, founder of the Weekly Standard and one of Trump’s vocal critics on the right, has been speaking out vehemently about Khashoggi’s disappearance—and he has little use for knee-jerk Trumpistas who have been defaming Khashoggi in the hope of making the president look good.

“Trump wants to take a soft line (on Saudi Arabia),” Kristol asserted. “So Trump supporters are finding excuses for him to take it. One of those excuses is attacking the person who was murdered.”

But all the anti-Khashoggi rhetoric in the world—from Roger L. Simon to Harris Faulker to the Confederate flag-loving Corey A. Stewart—doesn’t make the allegation that the Saudi Royal family had him tortured and murdered any less disturbing. Nor does it make President Trump’s embarrassing response to that allegation any less embarrassing.