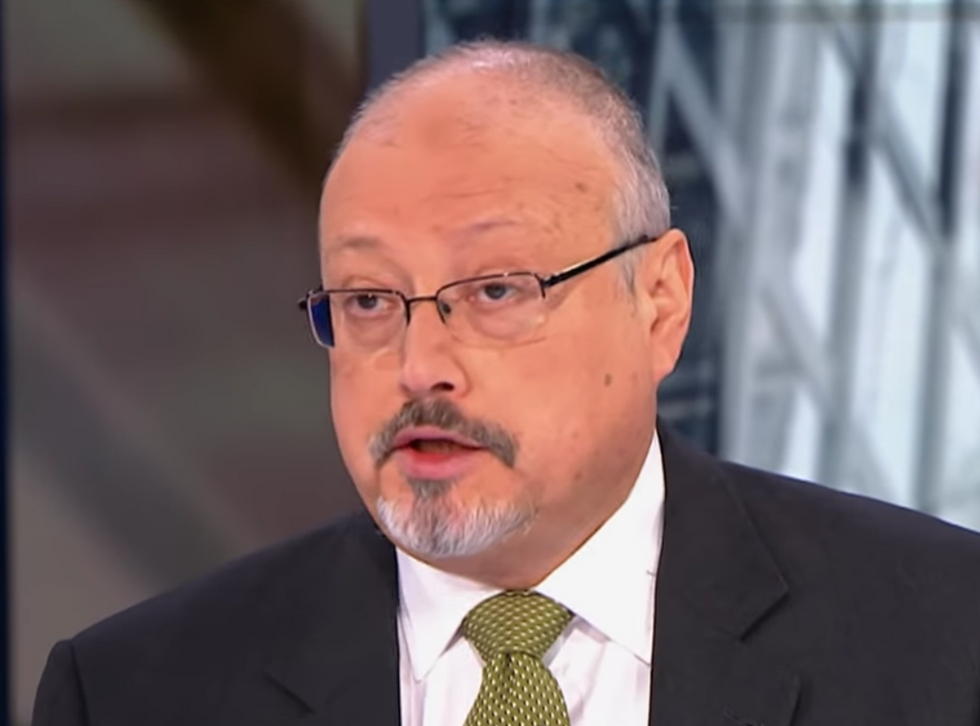 When it comes to the shocking disappearance of veteran Saudi journalist and Washington Post columnist Jamal Khashoggi—who was last seen entering the Saudi Consulate in Istanbul, Turkey on October 2—Saudi Arabia’s government can’t keep its story straight. First, King Salman bin Abdulaziz al Saud and his son, Crown Prince Mohammed bin Salman, a.k.a. MBS, insisted that Khashoggi freely left the Consulate on October 2 and that he wasn’t harmed in any way. But they didn’t offer a shred of evidence to back up that claim. And after Turkish government officials—along with the New York Times, CNN and others—presented an abundance of evidence indicating that Khashoggi was murdered by Saudi agents inside the Consulate that day, the Saudi royal family appeared to be changing its story and claiming that Khashoggi was the victim of an interrogation gone wrong (one neither King Salman nor Crown Prince Mohammed had authorized).

President Donald Trump, who sent Secretary of State Mike Pompeo to Saudi Arabia to meet with the royal family on October 16, has been taking Salman and Mohammed at their word and parroting their claim that perhaps “rogue killers” were behind Khashoggi’s disappearance. But others in the U.S. government have been much more aggressive when addressing the scandal, including some Republicans who are usually in lockstep with Trump—and everyone from Sen. Lindsey Graham to Sen. Bernie Sanders has been speaking out.

Here are five U.S. senators who are demanding answers about Khashoggi’s disappearance.

Trump has characterized the Turkish government’s allegation that the Saudi royal family sent a hit squad to Istanbul to have Khashoggi murdered as an example of “guilty under proven innocent”—and Trump even compared the allegations to the sexual misconduct allegations recently made against Supreme Court Justice Brett M. Kavanaugh, who he insists was the victim of false accusations. When CNN’s Chris Cuomo mentioned Trump’s Saudi/Kavanaugh comparison during an October 16 interview with Sen. Bernie Sanders, the Vermont senator hit the roof.

Sanders fumed, “Here you have a guy who was a critic of the despotic Saudi government. He walks into the embassy in Turkey—Saudi embassy in Turkey—he disappears. And the Turks are saying that he was killed. Nobody has heard from him, and Trump thinks this is a false allegation. Look, what you got right now is a president who is, frankly and sadly, very sympathetic to authoritarian-type people like bin Salman in Saudi Arabia or (Vladimir) Putin in Russia….He likes authoritarians.”

After Sen. Lindsey Graham’s blatantly partisan rant in favor of Kavanuagh at a Senate Judiciary Committee hearing on September 27, NeverTrump conservative Joe Scarborough (the former Florida congressman and ex-Republican who hosts “Morning Joe” on MSNBC), angrily asserted that the South Carolina senator had gone from being “John McCain’s wingman in politics to Donald Trump’s carnival barker.” But Graham doesn’t share Trump’s high opinion of MBS, and he has been quick to describe Khashoggi’s disappearance as a cold-blooded murder.

During an October 16 appearance on Fox News, Graham asserted, “You don’t have to be Sherlock Holmes to figure this out. (Khashoggi) goes into the Consulate, he never comes out. We have intel that Saudi Arabia, the Crowd Prince, was annoyed with this guy. They lured him.”

But unlike Sanders, Graham didn’t attack Trump but rather, characterized the Saudi royal family as being “disrespectful” of the president. Graham stressed, “This shows tremendous disrespect for me and President Trump….To send an assassination squad to Turkey to kill a man on foreign soil in a consulate violates every norm known to mankind. Freedom of the press, extrajudicial killings—this all originated from the crown prince, I’m convinced of that. The president needs to be measured; I get that. But the world is watching us.”

Trump and Sen. Marco Rubio were on very bad terms during the 2016 presidential election, when Trump dismissively referred to him as “Little Marco Rubio.” But like so many establishment Republicans, Rubio went on to support Trump on everything from tax cuts for the 1% to trying to overturn the Affordable Care Act to Justice Brett Kavanaugh’s confirmation. However, the Florida senator has made it clear that if the Saudi royal family had Khashoggi murdered, the U.S. must take a firm stand—even if means an end to Trump’s plans to sell arms to the Saudi government.

During an October 16 appearance on CNN, Rubio stressed that the U.S.’ credibility will be destroyed if it doesn’t take a firm stand on Khashoggi’s disappearance. Rubio told CNN, “Luring someone into a consulate where they’re murdered, dismembered and disposed of is a big deal…. There isn’t enough money in the world to purchase back our credibility on human rights and the way nations should conduct themselves.”

Democratic Sen. Mark Warner of Virginia, who is vice chairman of the Senate Intelligence Committee, has been quick to express his distrust of the Saudi royal family—noting that they haven’t been able to keep their story straight where Khashoggi’s disappearance is concerned. Interviewed by CNN’s Jake Tapper on October 16, Warner asserted, “This was not some dark alley, this was inside the Saudi Consulate. It strains any credibility that somehow the leadership of the Saudi regime, which is so authoritarian, wouldn’t have knowledge of these actions.”

Warner elaborated, “I don’t think I trust the Saudis on this because I don’t think they’ve been very forthcoming. I think there needs to be a full-fledged international investigation.”

In contrast to Graham’s obsequiousness with Trump, Arizona Sen. Jeff Flake has been a frequent critic of the president. And he has stressed that “severe action needs to be taken” in response to Khashoggi’s disappearance—noting that the Saudi government’s “explanation that their closed circuit television just streamed and didn’t record (inside the Consulate) just isn’t plausible. There’s no good explanation, and I think they know it.”