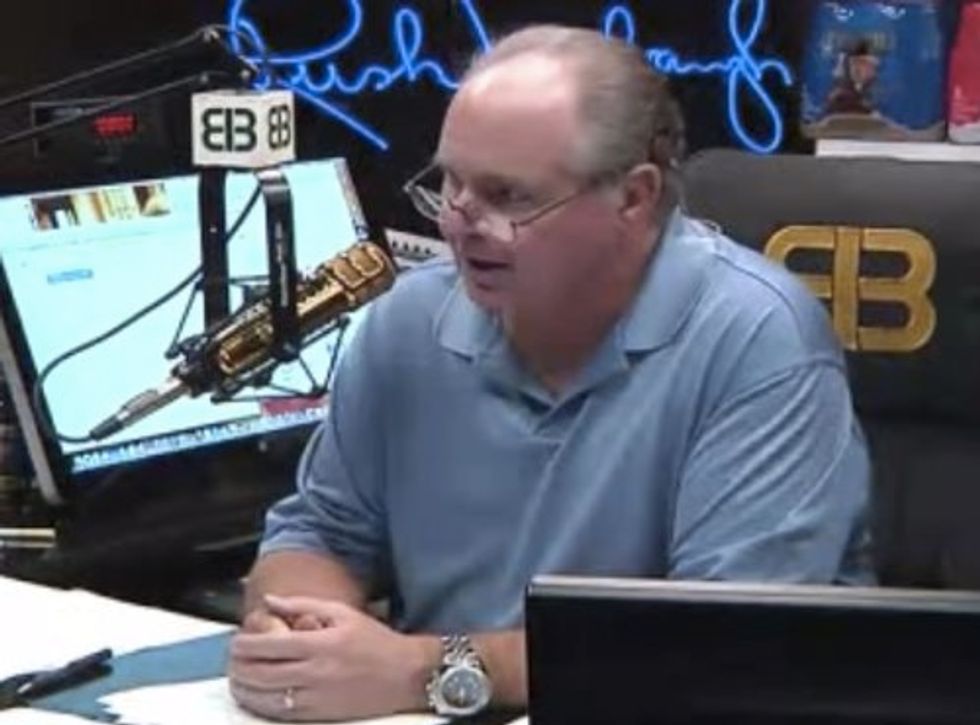 Looking at the political messages covering Cesar Altieri Sayoc’s van, it is obvious that the Florida resident hates Democrats as vehemently as he adores President Donald Trump. Sayoc, who was arrested on Friday, October 26 on suspicion of mailing a series of pipe bombs to prominent Democrats, covered his van with pro-Trump messages along with messages expressing his total hatred of Hillary Clinton and others who pipe bombs were mailed to. But to hear some wingnuts tell it, the pipe bombs—which Washington Post columnist Jennifer Rubin accurately described as a “coordinated attempt at mass assassination”—were nothing more than a “false flag” operation carried out by Democrats in order to make Republicans look bad.

The bombs aimed at Bill and Hillary Clinton, Barack and Michelle Obama, former Vice President Joe Biden, Rep. Maxine Waters, investor/philanthropist George Soros, actor Robert De Niro and other Democrats were a blatant example of domestic terrorism. But many ideologues are so deeply racist that they cannot conceive of terrorist attacks being carried out by those who are not Muslims or people of color. And not surprisingly, some of them have jumped to the knee-jerk conclusion that a potentially deadly mail bomb campaign aimed at Democrats was a “false flag” or “fake news.”

Here are five of the far-right pro-Trump wingnuts who have insisted that a campaign of domestic terrorism aimed at Democrats must be a “false flag” operation or a hoax.

After the news broke that prominent Democrats had been targeted for a campaign of domestic terrorism, Rush “OxyContin” Limbaugh asserted that a “Democratic operative” was behind the attacks because “Republicans just don’t do this kind of thing.” But even after Sayoc’s arrest, Limbaugh maintained that a false flag operation was being carried out for the purpose of discrediting Republicans ahead of the 2018 midterms. The veteran AM talk radio host insisted, “None of the stuff on that van—the stickers and the decals—very little of it looks faded, meaning it doesn’t look like it’s been there very long.”

Lou Dobbs, formerly of CNN and now with the Fox Business Channel, likes to paint himself as a law-and-order man. But when Democrats—including members of Congress and two former presidents—become targets of domestic terrorism, Dobbs shows no concern. On October 25, Dobbs posted on Twitter, “Fake news, fake bombs. Who could possibly benefit by so much fakery?” And in a separate tweet, Dobbs wrote, “Fake News had just successfully changed the narrative from the onslaught of illegal immigrants and broken border security to ‘suspicious packages.’”

Author Ann Coulter has never been shy about making outrageous statements in order to attract attention, and she did exactly that on October 24 when she visited Twitter and posted, “From the Haymarket riot to the Unibomber, bombs are a liberal tactic.” This wasn’t the first time Coulter took domestic terrorism lightly: after Dr. George Tiller was murdered by anti-abortion terrorist Scott Roeder in 2009, Coulter appeared on Bill O’Reilly’s “The O’Reilly Factor” on Fox News and made jokes about the killing (for example, “I don’t really like to think of it as murder. It was terminating Tiller in the 203rd trimester”).

With his adoration of Trump, Sayoc would hardly be welcome in the Antifa movement. But on October 24—two days before Sayoc’s arrest—Newsmax contributor John Cardillo speculated that Antifa might be part of a false flag conspiracy mean to discredit Republicans. On Twitter, Sayoc posted, “Investigators need to take a serious look at far-left groups like #Antifa when investigating the bombs sent to Soros, Obama and the Clintons. These smell like the false flag tactics of unhinged leftists who know they’re losing.”

In an equally ridiculous tweet, Cardillo wrote, “(It’s) just too coincidental that two weeks before Election Day, as the ‘blue wave’ has turned into a ripple, and the left is losing ground because of incivility and violent rhetoric, explosive devices show up in the mailboxes of Soros, Clinton and Obama.”

Cardillo is so twisted that even after Sayoc’s arrest, he found a way to blame Democrats—tweeting, on October 26, “Sayoc had three felony and one drug arrest(s) in Broward County, FL from 1991-2013. Far left Broward County officials cut him sweetheart deals on every single charge.”

Thankfully, no one was injured by any of the pipe bombs Sayoc has been accused of sending. But the bombs, had they exploded, could have not only injured their intended targets, but also, any mail carriers who came in contact with them. The safety of mail carriers, however, is obviously of no concern to Dinesh D’Souza, who managed to make light of sexual assault and domestic terrorism in a single tweet on October 25. Obviously referring to Christine Blasey Ford and two other women who accused Justice Brett Kavanaugh of sexual abuse, D’Souza visited Twitter and posted, “Fake sexual assault victims. Fake refugees. Now fake mail bombs. We are all learning how the media left are masters of distortion, deflection & deception.”