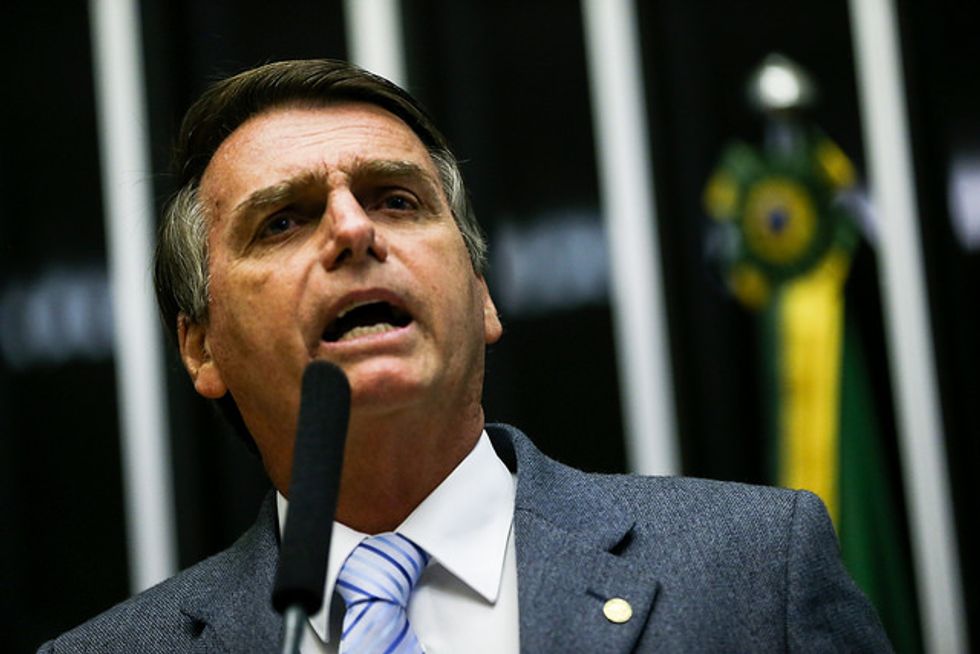 Lula in His Cell

Lula da Silva—Brazil’s former president—is sitting in his prison in Curitiba, a small town southwest of SÃ£o Paulo. He should not be there. Evidence of corruption against him hangs on the words of a felon. Lula should have been on the ballot. But the oligarchy refused to allow this most popular man to run for the presidency. Lula is visited by Pastor Anete Roese of the Evangelical Lutheran Confessional Church of Brazil. The pastor steps outside the prison and makes a statement. She says that Lula is concerned about the escalation of violence in Brazil. People are being murdered when they express their political support for the Workers’ Party candidate for president—Fernando Haddad. “The gates of violence are opening,” said Pastor Roese. The election—on October 28—will signal an “unprecedented avalanche of violence,” warned the pastor. Lula, sitting in his cell, unjustly incarcerated, worried with her. It is the poor who will suffer. It is always the poor who suffer.

Jair Bolsonaro, the candidate of the far-right who is now the candidate of the oligarchy, leads in the polls. He is nostalgic for Brazil’s military dictatorship (1964-1985) and wants to use unconstitutional force against those whom he sees are a problem for Brazil. His targets are the poor and the social minorities—Afro-Brazilians, Gays, Leftists. The oligarchy flooded the Bolsonaro camp with money. Democracy needs lubrication, and money does the trick. Some corporations used their money to create WhatsApp groups that carried fraudulent messages about Haddad, who is running against Bolsonaro. This is illegal. The hashtag #Caixa2doBolsonaro zipped across the internet. The whiff of fraud should have triggered an immediate investigation. It did not happen. It is Lula in prison. Bolsonaro hides his fangs behind his smile.

Steve Bannon said as he left the White House that the shackles were off his hands. He was no longer imprisoned by propriety. He wanted to be in the trenches, building his white supremacist, fascist international. Bannon calls his group The Movement. One of Bolsonaro’s sons said that Bannon has advised his father’s campaign, that Bannon—in sum—has drawn Bolsonaro into The Movement. Bolsonaro hastily denied this claim. To be linked to Bannon is not an advantage. Nor to Bannon’s fascist international directly. Nothing Bolsonaro says is varnished. He called people from the African continent, from Haiti and from the Arab-speaking world the “scum of humanity.” Bolsonaro’s moral geography mirrors that of Donald Trump, who called many of these places “shithole countries.” Of Afro-Brazilians, Bolsonaro called them lazy and obese, saying, “I don’t think they’re even good for procreation anymore.” Another member of the fascist international—Marine Le Pen of France—said that Bolsonaro’s comments are “extremely unpleasant.” Bolsonaro distressed her. This is Bannon country. Precise and clearly articulated hatred and venom.

Bolsonaro has been proud to say that he is “Brazil’s Trump.” But this is not a good comparison. It is clearer to say that Bolsonaro is Brazil’s Duterte. Rodrigo Duterte is the president of the Philippines. He came to office with a gun in his hand. Duterte was the mayor of Davao, where he empowered death squads to kill anyone deemed to be a criminal. “Kill them all,” he said in 2015 in reference to criminals. “Kill a drug dealer and I’ll give you a medal,” he said. He likes to be photographed with a gun in his hand, preferably a machine gun. Duterte would like to give out 42,000 guns to deepen the civil war in his society. Violence is the antidote to social problems. No policy of economic and social reform is sufficient. Gunfire is Duterte’s solvent. It is the glue of the Bolsonaro family. Jair Bolsonaro’s son—Eduardo—won re-election to the Federal Assembly on October 7 with a massive margin. In a video from last year, Eduardo holds a 50-caliber Barrett sniper rifle and says of the school shootings in the United States, “Thanks to you who support gun-free zones and this initiative to disarm people—you are responsible for these massacres.” Duterte also likes high-caliber sniper rifles, the M-4 Armalite being a favorite. These are men with guns, men who believe that guns make good policy.

In August, Steve Bannon told New York magazine that the rise of Trump—and the other neo-fascists (or monsters)—can be directly linked to the financial crisis of 2008. “The legacy of the financial crisis is Donald J. Trump,” Bannon said. “You know why the deplorables are angry? They’re rational human beings. We took away the risk for the wealthy.” Wall Street dislikes this analysis. They would like to maintain a firewall between their shenanigans and the rise of what they like to call “populists.” Bannon is both right and wrong. He is right that the neoliberal “moderates” drove a policy from the 1980s onward that allowed the rich to avoid paying taxes and to avoid investment, while the working people failed to earn their share from the gains of productivity and technology. High inequality rates around the world drained the legitimacy of the neoliberal “moderates.” The neo-fascists that emerged with acid on their lips did speak clearly about the fraud of the system, the theft from ordinary people by the oligarchy. But they did not point their fingers at the oligarchy or at high finance. Instead, true to form, the neo-fascists pointed their guns at migrants and refugees, at the urban poor and the rural distressed. For them, social marginality is the crime. Under cover of the monsters’ corrosive rhetoric, the oligarchy and the bankers have continued their plunder. None of these neo-fascists wants to implement Basel-III, a framework to regulate banking by increasing capital holdings. Nor do they want to make sure that corporations bear the downside of risks, rather than take the profits and burden taxpayers with losses. None of these elementary reforms are on the lips of the neo-fascists. They are too busy oiling their guns.

Hunger hangs heavily over the Brazilian poor. In 1960, the Afro-Brazilian writer Carolina Maria de Jesus wrote in her diary, “What a surprising effect food has on our organisms. Before I ate, I saw the sky, the trees, the birds—all as yellow. But after I ate, everything became normal to my eyes.” Hunger is blistering. It is what Lula’s government focused upon with its Fome Zero (Zero Hunger) program. According to the UN, hunger was almost eradicated by Lula’s government. Haddad was Lula’s education minister. They used public funds to expand Brazil’s public university system. Food and reading were at the heart of the Workers’ Party agenda. Poverty was reduced by 55 percent, while extreme poverty was reduced by 65 percent. No guns were needed. Lula’s agenda was to expand democracy. Bolsonaro’s agenda is to deepen neo-fascism.

Five hundred people of good sense—from Bernie Sanders to Angela Davis, from Noam Chomsky to Pablo Iglesias—signed a short document, an international declaration against fascism in Brazil. The document calls upon the Brazilian population to reject Bolsonaro, whose presidency would be a “threat to any free, tolerant and just society.” Brazilians will have to choose between “liberty and pluralism” on one side and “retrograde authoritarianism” on the other. “There can be no neutrality,” the signatories write, “in the choice between democracy and fascism.” This is a document. It might have a small impact. But it will not be able to compete with fake news and with hatred. Hatred is a more powerful emotion than love. It is what so easily undermines democracy. If Bolsonaro wins, asks the Portuguese political theorist Boaventura de Sousa Santos, will Brazil still be a democracy?