Should Progressives Demonize or Try to Find Common Ground With 60 Million People Dealing With Economic Anxiety Who Vote for Racist Politicians? 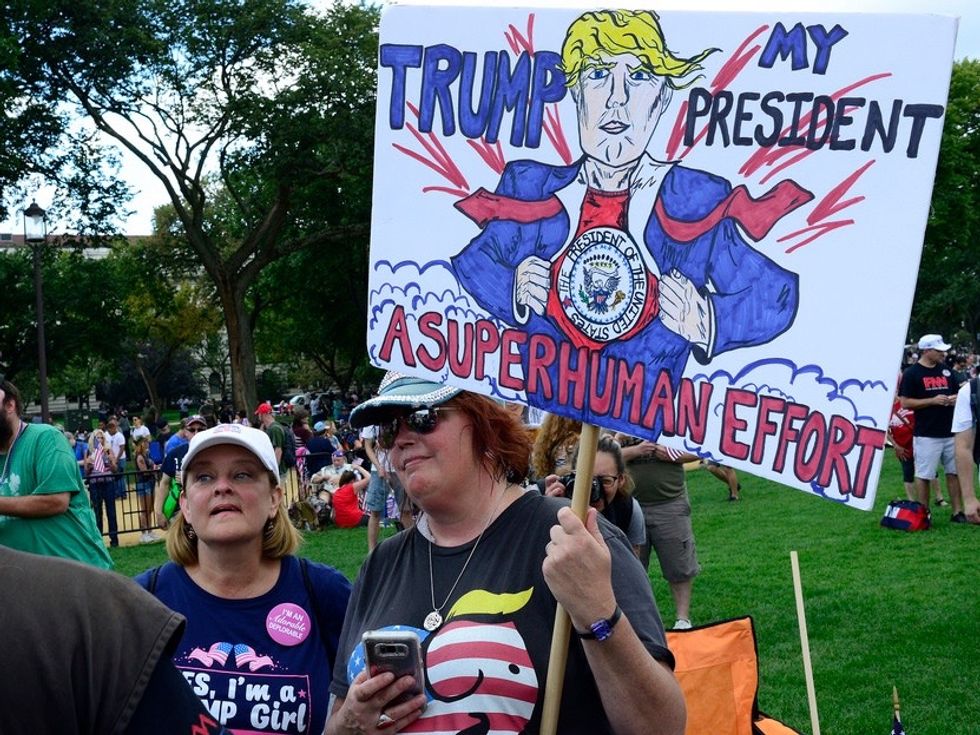 In a recent conversation with a friend, I yet again found myself grappling with an opinion shared by many liberals: that Trump supporters are motivated not by “economic anxiety,” but by sheer racism. This notion is now quite widespread, having been passed around and repeated until it’s treated like received wisdom. The reality is, while race is always at play in the United States, it’s simply inaccurate to reduce 60 million Americans to racist voters. Treating them as such will prove ineffective in advancing Democrats’ electoral goals, and is also dangerous to the entire project of turning our country around.

In the wake of the Pittsburgh tragedy, when an anti-Semitic white nationalist undertook arguably the worst terror attack against Jewish Americans in the history of the United States, it becomes all the more tempting to understand all conservatives and Trump voters through this lens. We must resist this temptation. Let me be clear: I am afraid, and I am angry too. There is a rising tide of white nationalism in our country. These white nationalists comprise a portion of President Trump’s base. And, I believe, his language and actions have contributed to the hateful and violent culture we are living in. But this does not tell the full story of the white working class.

This us-versus-them narrative may be convenient, but it undermines the best of the progressive tradition and simply fails to account for the validity of white working-class Americans’ experience with real, rock-hard economic truths. When we buy into it as the whole story, we allow the minority of white nationalists in the Trump coalition to blind us to the truths about the cross-section of Americans who pulled the lever for him in 2016. Far too many liberals act as if the economic realities of the white working class was at best all in Trump voters’ heads, and at worst simply a fig leaf, rather than a material reality.

Prominent writer and thoughtful analyst Mehdi Hasan, who has spent a lot of time on these matters, recently shared his considered view on this topic. It is valuable to consider his insights. After marshaling survey data and the analysis of other researchers, Hasan wrote in the Intercept that “it’s time to slay this zombie of ‘economic anxiety’ once and for all.” Without dismissing Hasan’s argument out of hand, I would urge us to consider the fundamental truths that uphold the notion that economic experience is a primary driver of people’s voting habits.

The numbers and conclusions that Hasan summoned certainly tell an important story, but if taken as the whole story, they can serve as a particularly convenient “out” for anyone who finds comfort in asserting that conservative or right-wing voters not only made a bad choice, but are, themselves, bad people.

We can then reason that their bad choice was motivated by bad values, and that we are right to stand against them and their bad motivations. It’s a simple story of us-versus-them, good-versus-evil. “Convenient” isn’t a synonym for “accurate,” however. And Hasan himself quietly acknowledges that his conclusions don’t mean “that economic grievances are irrelevant.” But these grievances are more than relevant—they are crucial for understanding our fellow Americans.

For instance, shortly after the 2016 election, the New York Times reported that there were “almost 9 million more jobs than there... [had been a decade earlier], just before the economy tumbled into recession. But the gains... [were not] evenly distributed.”

While we can explain that these job gains were an overdue corrective to a long history of employment and structural disadvantages for communities of color, the fact is that the economy didn’t right itself evenly, and those left behind are still reeling from the economic implosion of 2008 and struggling to make sense of it. Is it racist to identify the racial component of the distribution of the recovery? Are voters who feel this very real economic pain in their everyday lives racist for resenting it?

If post-recession opportunities are shrinking for the white working class, these voters are going to want to fight to change a system that’s creating not more but less opportunity for them and their families. We can’t ignore this experience and hope that, in some super-human way, these voters will transcend it. Progressives may not agree with the meaning that some working-class whites are making of these numbers, but we need a strategy to engage them, and, from my experience, summing them up as racists is unlikely to change how they vote or motivate them to think differently about the issues facing the nation.

More recently, the Times reported that 2016 saw a sharp slowdown in business investment in very narrow sectors of the economy; that, in fact, part of America lived through another recession in the run-up to the presidential election, though most of us didn’t notice it: “Overall economic growth slowed but remained in positive territory. The national unemployment rate kept falling. Anyone who didn’t work in energy, agriculture or manufacturing could be forgiven for not noticing it at all.”

Here’s another rock-hard economic truth ignored by too many liberals: The industries hit hardest by those negative numbers correlate very closely to the parts of the country where Trump won key votes.

Two things are striking: The economic reality facing these white working-class voters—not their “anxiety,” but the real hardship they were and are enduring—shaped their experience heading into the 2016 election. And, in more diverse and prosperous urban areas that serve as Democratic strongholds, we didn’t even notice that hardship. The Times might say we can be “forgiven” for not noticing this, but our failure to acknowledge the truth of white working-class voters’ experiences, in favor of instead seeking to explain their vote through our experiences, has contributed to the huge divides we are seeing today.

The bottom line is, unless we change our attitude and stop spending time trying to sum up these voters in far too simple ways but instead take seriously the economic defeat that shapes the mindsets of those whose lives are very different from ours, it’ll be hard to change the country’s direction.

While we have been focused on attributing their votes as completely as possible to attitudes about race, we have been unwilling to allow an alternative image of them into our awareness. In one of the same studies that Hasan cites as he paints a picture of racially motivated voters, we can also find a profile of a community that is in trouble. We should seek to understand this community and its grievances, not explain them away. Here is a snapshot of how the country looks to this group, taken from a study by PRRI/The Atlantic:

Educational Investment. Americans overall are significantly more likely to say that a college education is a smart investment (55 percent) than to say it is more of a gamble that might not ultimately pay off (43 percent). White working-class Americans, however, are far more skeptical. A majority (54 percent) of the white working class view getting a college education as a risky gamble, while 44 percent say it is a smart investment. This puts them at odds with both white college-educated Americans and with black and Hispanic Americans, who have much more faith in the education system. Majorities of white college-educated Americans (63 percent), Hispanics (68 percent), and blacks (56 percent) believe a college education is a wise investment in the future.

Economic fatalism. White working-class voters who said that college education is a gamble were almost twice as likely to express a preference for Trump as those who said it was an important investment in the future.

This picture of the white working class can help us see them more fully and consider their views more thoughtfully. The good news is that progressivism has traditionally felt empathy when confronted with people’s pain and has a longstanding commitment to inclusivity. These habits should serve us well here. We can look proudly back on a history of building ever-expanding circles of diversity into American life—of showing compassion for those struggling to get ahead or even get by.

Today, we should know how to address the blind spot we’ve developed around this part of the American population, because we’ve done it before. Rather than explaining away their electoral choices, writing them out of our electoral equation, and pretending they won’t continue to be a dominant force in local, state and national elections for decades to come, it’s worth considering other options. We can denounce racism and still take seriously the economic realities in white working-class communities.

When the dust settles after November 6, there will once again be endless speculation about the outcome. Most of the political lines will no doubt be drawn exactly as they have been in the recent past.

If we want to learn from that past, though—if we want to truly move forward and not only improve electoral outcomes but also move the whole country in a direction that serves all Americans—we’ll have to learn to listen to those voices we have come to demonize, even though we may disagree on a range of things. If we want what’s best for our country, we’ll have to do so, whether it’s convenient or not.