'Selling Out America': Paul Krugman Explains How Trump and His Cronies 'Are Willing to Endanger Civilization' for Political Gain 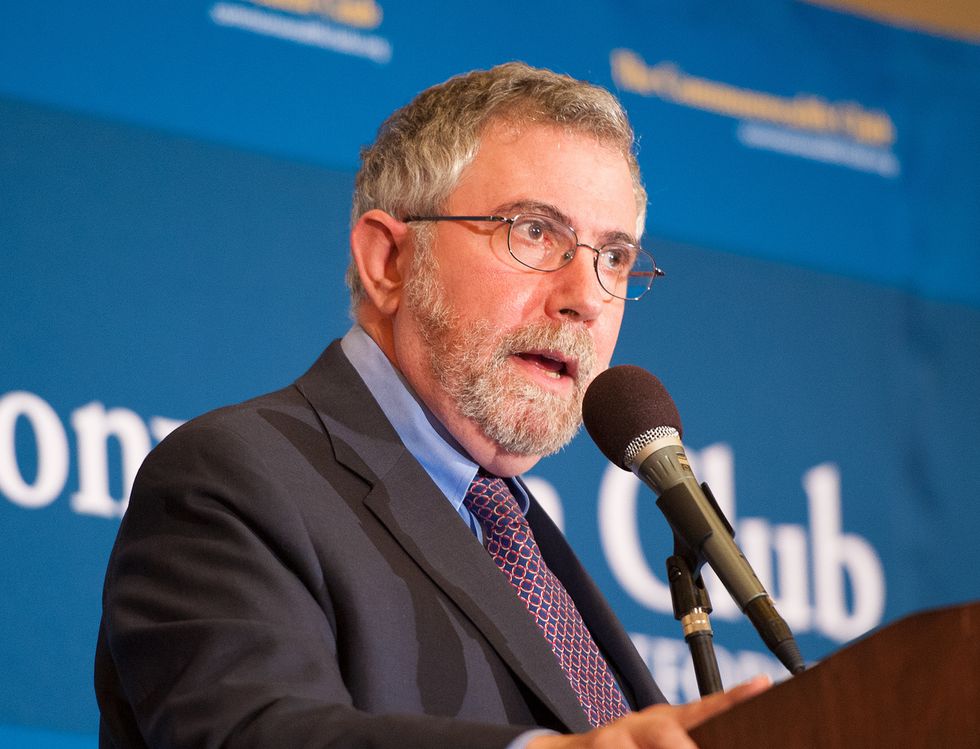 A new report from the United Nations detailing the looming threat of global warming should be all anyone can talk about this month, but instead, it has been largely ignored in the American political debate.

The reason is simple: Almost no one believes there's much chance the United States has the political will to do anything substantial to combat climate change. Because as long as the Republican Party holds any bit of power in Washington, D.C., it will do whatever it can to thwart efforts to wind down greenhouse gas emissions

In a new New York Times op-ed, economist Paul Krugman argued that the shifting responses Republicans — including now President Donald Trump — give in response to questions about climate change reveal that they are not reacting to the issue in good faith. They'll go from denying that climate change is happening, to denying that humans contribute to it, to denying that there's anything to be done about the issue — all without altering their fundamental assumption that there's no reason to impose any costs on the fossil fuel industry.

"Details aside, the very multiplicity of climate-denial arguments — the deniers’ story keeps changing, but the bottom line that we should do nothing remains the same — is a sign that the opponents of climate action are arguing in bad faith," Krugman wrote. "They aren’t seriously trying to engage with the reality of climate change or the economics of reduced emissions; their goal is to keep polluters free to pollute as long as possible, and they’ll grab onto anything serving that goal."

He added: "[We're] now ruled by people who are willing to endanger civilization for the sake of political expediency, not to mention increased profits for their fossil-fuel friends."

The complete vacuity of their position has been clear for literally decades. Krugman continued:

These days, climate deniers seem to have temporarily backed down a bit on claims that nothing is happening. The old dodge of comparing temperatures to an unusually warm year in 1998 to deny that the planet is getting warmer — which is like comparing days in early July with a warm day in May, and denying that there’s such a thing as summer — has been undermined by a string of new temperature records. And massive tropical storms fed by a warming ocean have made the consequences of climate change increasingly visible to the public.

So the new strategy is to downplay what has happened. Climate change models “have not been very successful,” declared Larry Kudlow, the top White House economic adviser. Actually, they have: Global warming to date is well in line with past projections. “Something’s changing and it’ll change back again,” asserted Donald Trump on “60 Minutes,” based upon, well, nothing.

Having grudgingly conceded that maybe the planet is indeed getting a bit warmer, the climate deniers claim to be unconvinced that greenhouse gases are responsible. “I don’t know that it’s man-made,” said Trump. And while he has sort-of-kind-of backed down on his earlier claims that climate change is a hoax concocted by the Chinese, he’s still seeing vast conspiracies on the part of climate scientists, who he says “have a very big political agenda.”

Amazingly, even after the Republican Party has been proven wrong again and again on this issue, it has felt no need to reexamine its fundamental assumptions about the issue or admit error.

And in addition to the corrupt motive of seeking to please their fossil fuel industry donors, Krugman suggests another reason for ignoring the reality of climate change. As the party has continued to devolve and lost any stable values, it clings to the unifying joy of "owning the libs." As long as liberals think combatting climate change is an important issue, Republicans will be happy to ignore it.

But politics is not just a game, despite the cartoonish arguments that have become so common on the right wing. The right's terrible policy choices have real consequences.