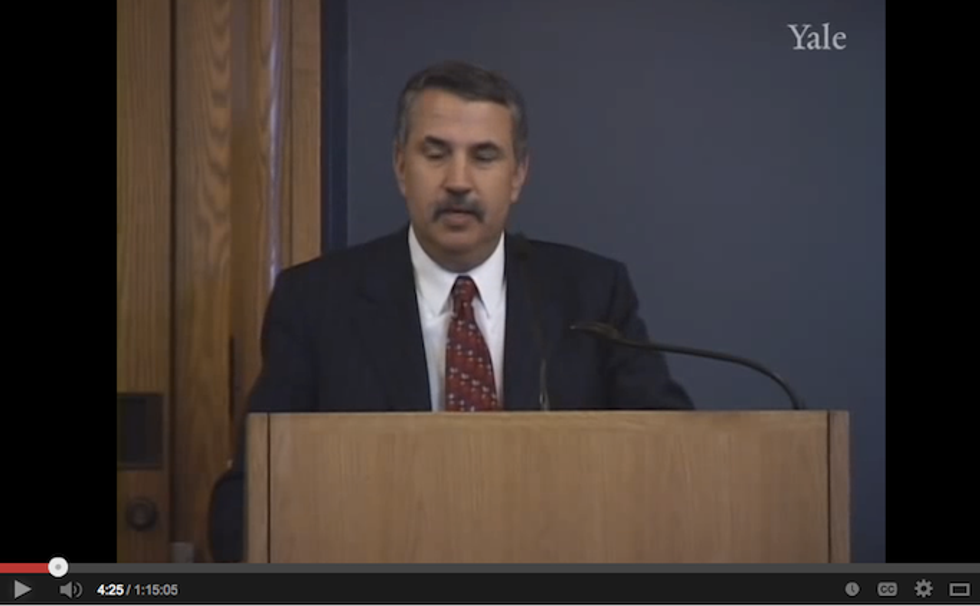 No one thinks Thomas L. Friedman, the lead foreign affairs columnist for the New York Times, has an easy job. I wouldn’t want it. Like his closely allied counterpart at the Washington Post, David Ignatius, Friedman stands astride the interlocked pinnacles of two powerful American institutions: the mainstream media and the national security establishment. He has unparalleled access to the innermost thoughts of the latter, and serves as the moralizing voice of the former. All of that comes at a price, perhaps best exemplified in Friedman’s use of a mysterious, pseudo-royal first-person plural.

Consider Friedman’s tormented column this week about how the United States should respond to the apparent murder of journalist Jamal Khashoggi by forces close to Saudi Crown Prince Mohammed bin Salman, now known around the world as MBS. This is the same prince, of course, whom Friedman lauded last November in a column he would surely love to scrub from the internet. Back then he praised MBS as the leader of an “Arab Spring, Saudi-style,” quoted lines from “Hamilton” at him during their lengthy late-night conversation in the prince’s “ornate adobe-walled palace,” and pronounced: “I, for one, am rooting for him to succeed in his reform efforts.” Here’s Friedman today, with the bromance breaking bad:

So, once again, what do we do? I don’t have a simple answer. It’s a mess. All I know is that we have to find some way to censure M.B.S. for this — without seeming to attack the whole Saudi people and destabilize the country. And we have to make sure that the social/religious reform process in Saudi Arabia proceeds — whoever is in charge there.

Leaving aside the maddeningly vague and deliberately toothless non-prescription on offer here — let’s “find some way to censure” MBS for allegedly having a prominent journalist tortured, killed and dismembered (I’m sure the prince is shaking in his handmade Italian loafers at that prospect) — who exactly is the “we” who must do something, or perhaps nothing? It sure sounds like the United States government, right? Except that Friedman does not work for the government, technically speaking, and is presumed to be voicing his own opinions as a prominent bulwark of the free and independent press.

Whatever is going on with people like Friedman and Ignatius and their sudden, fevered scramble to back away from the Saudi prince they previously lavished with flowers and hosannas, it has nothing to do with individuals changing their minds or the operation of a free and independent press.

If we assume for argument’s sake that Friedman’s opinions (or Ignatius’ opinions) are really his opinions, they are never his alone. They are formed by consensus, shaped by a coalition of “responsible adults” who work in the national security agencies, the State Department, the Washington policy think tanks and various foreign governments closely allied with our own. He speaks them as a representative of a particular elite caste who have Thought Deeply About Such Things, are not overly swayed by personal or sentimental considerations and are working (as they perceive it) for the ultimate betterment of humanity, under the permanent mentorship of the United States of America. That’s who “we” are, in the Friedman lexicon.

Given that context, it may not be entirely fair to point fingers at Friedman and Ignatius as the two biggest MBS fanboys in the Western media, now desperately trying to erase all the mash notes and sparkle-pen hearts from last year’s journals. (Glenn Greenwald of the Intercept offers a useful chronicle of Ignatius’ paeans to MBS — in the same newspaper that employed Jamal Khashoggi — and links back to a FAIR analysis of Ignatius' long track record as professional Saudi apologist.)

They certainly were not alone, and served as public spokesmen for a much larger constituency of so-called experts who went all-in on the charismatic young prince. As David Frum documents in a fascinating analysis for the Atlantic, Bob Woodward got thoroughly snookered into MBS-mania while reporting “Fear,” his book about the Trump White House, apparently by swallowing lines from one Derek Harvey, a minor National Security Council official and protÃ©gÃ© of Michael Flynn. Dennis Ross, a former national security aide to four previous presidents of both parties, wrote an especially embarrassing Washington Post op-ed in February, headlined “America should get behind Saudi Arabia’s revolutionary crown prince.”

Meanwhile, Friedman has spent much of the last two weeks quoting his own previously-expressed doubts and reservations about MBS — always carefully inserted between the fawning passages — and I guess you can’t blame him. Beneath all that ass-covering, we may detect a note of protest: My friends made me say all that stuff but I never totally believed it!

What this gruesome and disturbing episode really reveals, however, is something more than the sock-puppet status of a major American journalist, which should not come as a huge surprise. Friedman and Ignatius and the people who fill their brains with Serious Thoughts seized on MBS almost in desperation. “Perfect is not on the menu here,” as Friedman himself wrote in his MBS puff piece last year. Embracing an ambitious young prince who promised to open up movie theaters and let women drive was a calculated gamble that – and this is the really important part – suggested a halfway plausible rationale for continuing America’s snuggly relationship with the thoroughly noxious Saudi regime.

In fairness, Friedman is well aware of this conundrum and has laid out the back story many times, including this week. (I’m accusing him of being a tool, not an idiot.) The U.S. cut a nearly explicit deal with the Saudis, some decades ago: Keep the oil flowing, keep the Arab nations from attacking Israel and keep acting as a regional rival to Iran, and “you can do whatever you want out back” (in Friedman’s words), including running the most repressive theocracy anywhere in the world, exporting an especially poisonous blend of fundamentalist Islam that fueled violent uprisings in many different places, and waging a brutal proxy war in Yemen that may be the worst and least-noticed humanitarian disaster of this century.

Friedman and the establishment forces he represents now claim to understand that this was a “terrible bargain,” for which the United States and the Western world paid a dreadful price with the 9/11 attacks, the wars in Iraq and Afghanistan (which of course Friedman supported), the rise of ISIS, the widespread panic over terrorism and all the rest of it. But the invisible “we” behind Tom Friedman, as he admitted this week, have literally no idea what to do now that their boy-prince reformer has been revealed as a stone-cold killer.

One thing the foreign-policy mandarins won’t do, and perhaps can’t do, is go back to first principles and ask fundamental questions about what sorts of relationships the United States should build in the Middle East. Is it really in America’s national interest to tie ourselves so closely to a despotic and widely despised regime that is even now facing the beginning of the end of the Age of Oil? Is Iran, with all its problems and internal tensions, a measurably worse option as a negotiating partner or a regional power? (I wouldn’t choose to live in either country, but compared to Riyadh, Tehran is pretty much Paris in the 1920s.) If we really lived in a functioning democracy, such questions would be discussed out in the open, rather than having the apparatchiks of the national-security state assure us that they aren’t even questions.

In the Friedman-Ignatius gospel, Mohammed bin Salman became a necessary ally, whatever his faults, because he promised to tone down the extremist version of Islam preached in Saudi Arabia, purge the fanatics, and thereby empower Islamic moderates throughout the region. That doesn’t sound like a bad idea, but it’s also a typical top-down solution from the think-tank genius bar, reflecting an ass-backwards understanding of the relationship between ideology and material conditions. Saudi Arabia is a terrible nation with terrible rulers and a terrible religious culture, but here’s something the Saudis didn’t do: They didn’t blunder into multiple Middle East wars on false pretenses, cause millions of deaths for unclear reasons and turn the entire region against America. I wonder who did that?