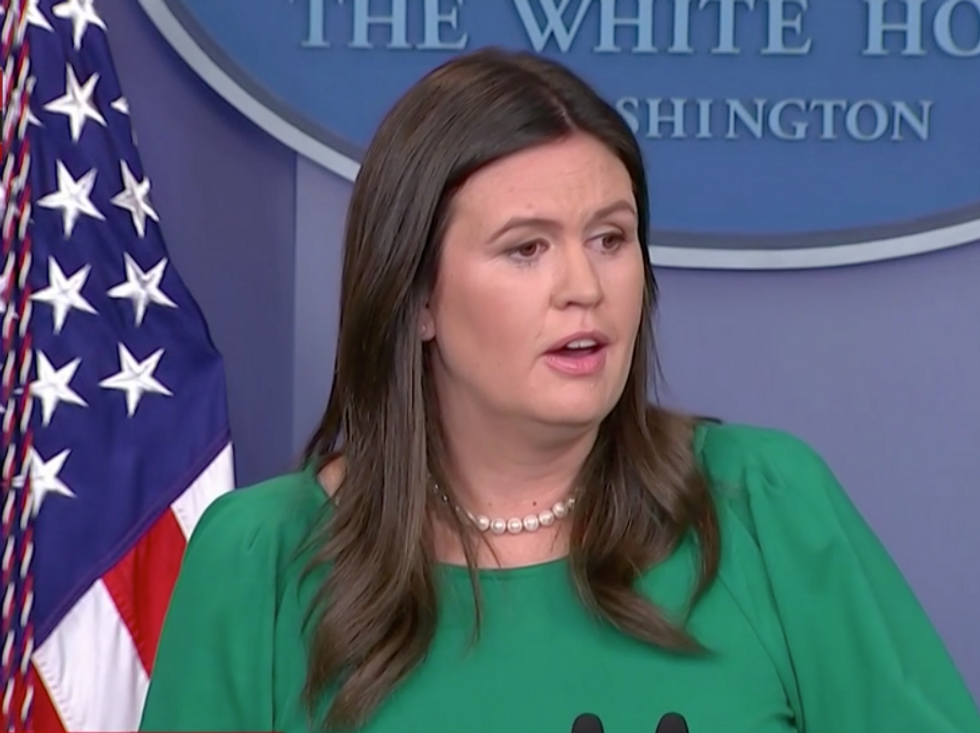 In a press briefing on Monday — an event which has become exceedingly rare at the White House — Press Secretary Sarah Sanders struggled to defend President Donald Trump's dangerous rhetoric about the press in light of the recent terrorizing attacks on his critics, including CNN.

Sanders tried to deflect the backlash the president has received for his incendiary style and open celebration of violence, saying that no one can be blamed for the recent spate of attacks, including mail bombs sent by an alleged supporter of the president, except the attackers themselves. When reporters pointed out that Trump himself has tried repeatedly to blame the media for these attacks, she ignored this fact. Instead, she lied and said that the "very first thing" the media did in response to the mail bombings was blame the president. In truth, the media did what it always does — report the facts of the case.

CNN's Jim Acosta continued to press Sanders, and demanded that Sander "have the guts" to name who, specifically, Trump is referring to when he calls the media "the enemy of the people."

"The president is not referencing all media," she said. "He's talking about the growing amount of fake news that exists in the country."

Acosta asked whether this meant CNN, which had been the target of the recent mail bombs ("CNN sucks" is a common chant at Trump's rallies, and a sticker with this slogan appeared on the van of mail bombing suspect). She again deflected, but then criticized CNN for blaming the attacks on media as an example of fake news.

Of course, commentators on CNN saying that Trump deserves a share of the blame because of his inciting rhetori is an expression of opinion — not "fake news."

The administration's inability to distinguish between opinions it disagrees with and actually false news stories is emblematic of its deceptive attacks on the press and its utter disregard for the spirit of the First Amendment.