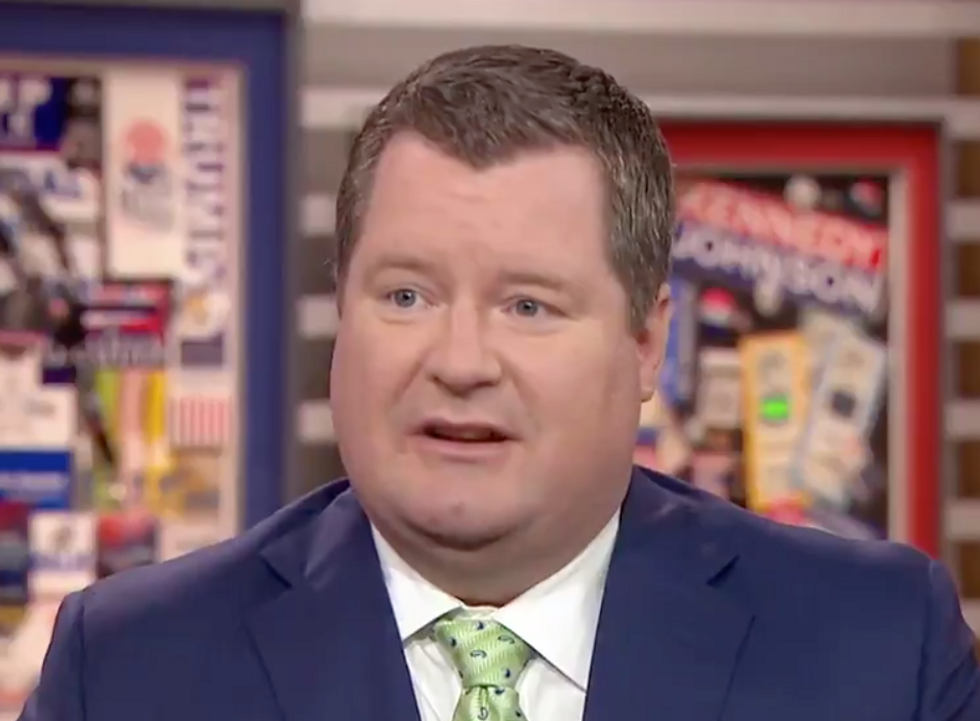 Right-wing conspiracy theories appear to be the source of two of the most recent horrifying high-profile attacks in the United States this week. First, a series of bombs was sent to multiple Democratic figures and CNN, allegedly by a man who promoted delusional and conspiratoral beliefs about these individuals. And second, on Satuday, a mass shooting killed 11 people and injured several more at a Pittsburgh synagogue, and it was allegedly carried out by a a man who believed anti-Semitic consiracy theories about immigration.

To discuss this troubling trend, MSNBC brought on a right-wing commentator who has himself trafficked in troubling conspiracy theories — even in recent weeks — but barely acknowledged his checkered past.

That figure was Erick Erickson. As Media Matters for America documented, he helped promote a right-wing conspiratorial attack against David Hogg, one of the prominent survivors of the Parkland shooting. Those survivors, and Hogg, in particular, were subject to outrageous conspiracy theories and vicious attacks in the right-wing press, and Erickson was a part of that.

And as recently as Monday, Erickson tweeted: "It is not a coincidence that this caravan to the south of us is happening 2 weeks before our federal elections."

When told that there's no reason to think there's some kind of "coincidence" to be explained (a similar caravan was traveling in the spring), he added: "Perhaps, but I doubt it. This is organized and the organizers know what they are doing."

This vague and conspiratorial phrasing fed into the baseless and ridiculous accusations that Democrats — and donor George Soros in particular — was somehow funding the caravan. The explanations never made an ounce of sense, especially given the fact that Republicans believed the caravan could be a strong issue to run on in 2018. And that same week, Soros was among those who received a pipe bomb in the mail, apparently from a supporter of President Donald Trump.

Yet when Erickson appeared on "Meet the Press" Sunday, host Chuck Todd only obliquely referred to his trafficking in this nonsense.

"I think we all have an obligation here," said Erickson, addressing the troubling rise among conservatives of erroneous "false flag" theories about the pipe bomb mailer.

But he didn't address his own culpability in spreading these types of lies. And he also emphasized the fact that people should give up the conspiracies once we "know the facts." While this is true, it fails to take responsibility for the fact that he and others have pushed this nonsense when few if any facts are known — which can be just as dangerous as contradicting the known facts.

WATCH: Erick Erickson speaks to conservatives who spread conspiracy theories, now that we have facts about the bomb… https://t.co/ATI1xsJJ1T
— Meet the Press (@Meet the Press) 1540734047.0