Ricki Lake on 'Weed the People': 'It’s Not About Getting High, It’s About Children Dying of Cancer' 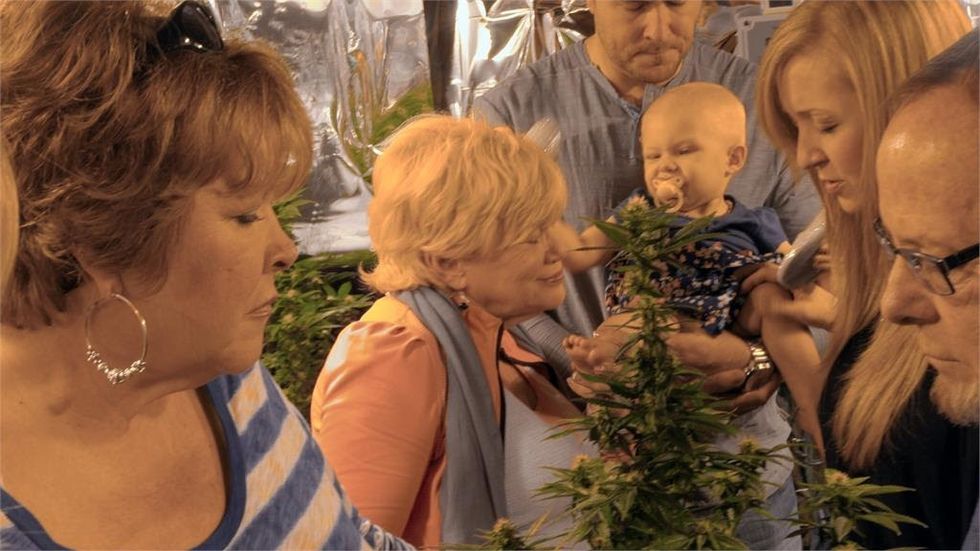 “Weed the People” is director Abby Epstein and executive producer Ricki Lake’s timely and compelling documentary about using cannabis oil as an alternative medicine for children with cancer. The film features half a dozen case studies of babies and teens who take this form of medical marijuana to reduce tumors. It is, as one believer states in the film, “not a cure, but an extension of life.”

Weed is still classified by the DEA as a Schedule I drug, and as the film explains, the government has a medical patent on marijuana, which seems hypocritical. Moreover, while in America, research on the effects that cannabis has on treating cancer have been minimal — most studies show the negative, not positive effects — in countries like Israel and Spain, there are encouraging findings about the drug’s healing properties.

“Weed the People” follows several families benefiting from cannabis treatment to track their progress. The film also showcases women on the front lines including Mara Gordon, co-founder of Aunt Zelda’s, which creates and sells cannabis oils to patients, and Dr. Bonni Goldstein a medical director at Canna Centers, who lectures on the efficacy of cannabinoid therapy.

Salon spoke with executive producer Ricki Lake about cannabis oil, its efficacy, and her new film “Weed the People.”

The film talks about a drug policy issue being a human rights issue. It is one of four documentaries you’ve produced on social issues, after “The Business of Being Born,” “Breastmilk” and the forthcoming “Sweetening the Pill.” Why have you become an advocate for these causes?

I shifted gears post 9/11. I was doing my old talk show back then and had my second son homebirthed two months before 9/11. I became a mother on my own terms, and then two months later I was back on my show where it was, “My baby daddy thinks I’m a whore!” So, I soul searched about what I cared about. I wanted to make a difference. So, I went on a journey with Abby [Epstein], invested my own money, and used my personal homebirth footage — which I never expected to show anyone — to make “The Business of Being Born.” I felt I had to do that, and the impact that film had was major. Protocols have changed in hospitals because of our film.

With cannabis, it wasn’t my medicine, or my cause, but my husband passed away, and it was his passion. He was on the path to learn about CBD [Cannabidiol] even before Sanjay Gupta on CNN. We met a little girl who was 30 lbs., and 6 years old and, this is crazy, but we moved her and her family into our house and took her to osteopaths and a cannabis doc. She’s not in the film, but “Weed the People” comes from our personal experience and natural curiosity. It is fulfilling to make these films. They are important and hard to finance, but in the end, we have something that can be the tipping point.

What prompted you to investigate this alternative medicine in general and as a treatment for kids in particular?

It’s my [late] husband Christian’s legacy. That’s what makes the project so important to me. There are enough films about drug reform, and legalization, etc. This was about the kids and following the stories, and hopefully to get change to happen. We did it specifically to take the stigma away. It’s not about legalization, regulation, or getting high; it’s about children dying of cancer and the heroic docs and scientists putting their time into this. We followed some adults, like a mom with Stage 4 cancer who has surpassed life expectancy, but it was to look at the medicine. Scientists can’t do science because it’s a Schedule I drug. But [medical marijuana] has been used to treat many innocuous ailments, such as anxiety and pain, and now it’s used to shrink tumors.

How did you find the authorities interviewed in the film; what were the criteria for the case studies featured?

That’s more Abby’s work, but many we got through word of mouth. We met with cannabis makers, dispensaries, and through doing the film we went to ASA, the Americans for Safe Access Conference, in DC, and we met Dr. Donald Abrams and Dr. Sunil Aggarwal. We had great luck with these amazing people who are so knowledgeable about the plant. They’d lead us to others. It was hard to find oncologists to talk on camera about this. We’d meet them, and then they’d hear it is about cannabis and shut the doors.

One of the things I appreciate about this industry is how parents are learning more than the doctors; Sophie’s mom, Tracy, becomes a “momcologist.” Her desperation prompts her to seek out treatments to save her child’s life. It’s not unlike the AIDS crisis where the LGBT community educated themselves about treatment to help themselves because the government wasn’t providing them any support. What observations do you have about how folks in this industry — and these parents — are working to educate themselves and society, especially in light of the lack or published research on the topic?

I think in this day and age we have to advocate for ourselves, period, in the health industry. We need to go in and demand what we want. They work for you. Mothers know about their bodies and babies. You have to dig, and there are bogus stories and bad medicines and its challenging, but with more states legalizing marijuana, it’s shifting. Its slow, but it’s starting to happen. This film will be a good tool to have so families will know what to look for. We’ll be inundated with, “Where do I go for my kid? What is available? What are the laws? And what strains work for what cancer?" In Israel, you can narrow down what’s working for prostate or breast cancer.

What’s interesting to me about medical marijuana is the business side. This mostly exists as an underground/black market economy, albeit one that has support of some oncologists. There is an interesting development when Mara is told one of her patients has found a cheaper source. Jim, a firefighter profiled in the film, raises money through a fund so he can continue his daughter’s treatment. How much of this story is follow-the-money?

Mara is no longer makes medicine in her kitchen. She’s got a lab now. But she is not getting rich. She is only charging for the bud. She lives a humble life and it is one about being of service. There are stories of grows, but taxes in California are [steep], and a lot has changed because it became legal. They can’t sell CBD in California. All these shifts are happening. They are working it out.

Let’s talk legality. The treatment apparently is not illegal in states where medical marijuana is permitted. There is, however, a case in the film where a family must move to California from Chicago to take part in treatment they could not get at home. Can you talk about this issue, which is as much about access, government regulation, and to an extent, money?

I think it’s all of the above. It’s crazy that that family in the film had to move. Part of it was is the kind of cancer he had. He ran out of donors, so people broke the law to be angel donors and send it in the mail so he could get a better quality of life.

California has the best conditions for making the medicine and it’s legal. Dr. Bonni Goldstein is freaking hero. She has turned her entire practice into pediatric cancer. Tracy Ryan is a warrior and what she achieved with her daughter, and her being so proactive and building a business to help other families is really inspiring.

What about the ethics of this alternative medicine? Should a 14-year-old, like Chico in the film, be getting a medical marijuana kit for his birthday?

Yes. I clearly think so. People might have an issue with it. As his mom says, “If you told me I would buy my son grow equipment…” It sounds crazy, but if you look at Chico at the beginning of film and then at the end because of cannabis, he’s the poster child for this medicine to do something for one’s quality of life. People audibly gasp when they see his transformation.

As I watched the film, I was convinced by the successful treatment in some patients, but I also questioned how much of this is hope and faith-based, and how much can be proven? Mara talks about dosing, and an increase in the amount of oil given to baby Sophie may be what helps her. There is research being done abroad that cannabis is effective. And we hope that it is safe. Should we remain skeptical?

With epilepsy, you can study a child having 100 seizures a day and give them cannabis oil and then see him have three. Cancer you can’t see in such a black and white way. We have anecdotal results of five and a half years of these children. They are starting to do cannabis/cancer studies in UCLA, but we need more scientific studies, so hopefully that will be coming soon.

So, is it difficult to go from being an interviewer on a talk show to being interviewed about the films you are producing?

These films are provocative, and I am able to use the platform I have achieved at a talk show host to be able make these films. I don’t have an agenda. I am grateful for my past career and the work I’m getting to do now.