Yet Another Company In Rick Scott's 'Blind Trust' Made Millions Off State Contracts: Report 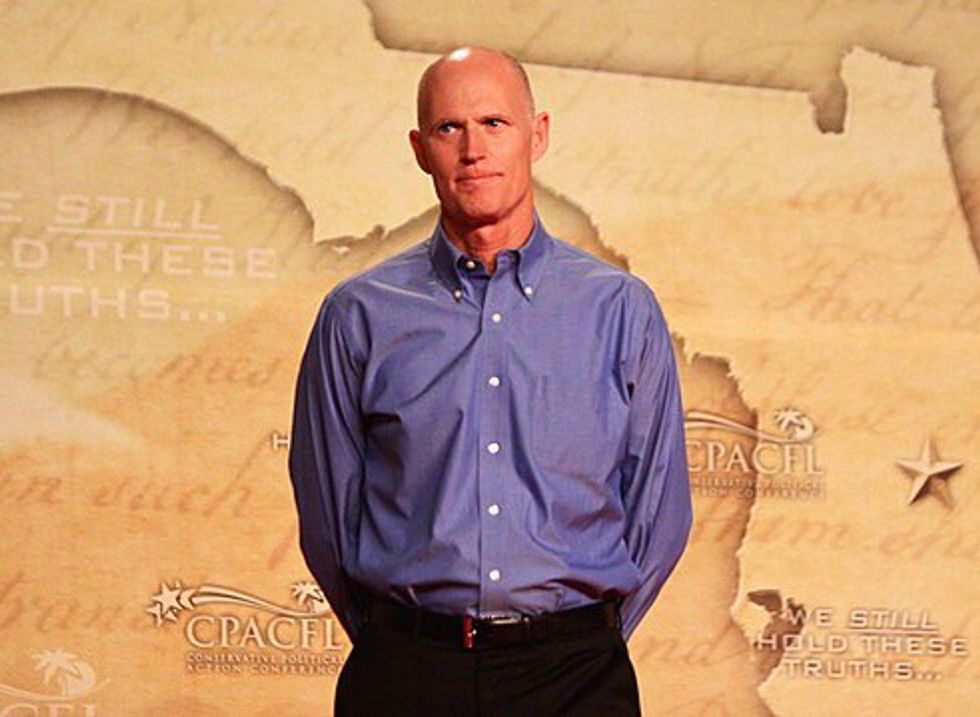 On Thursday, the Palm Beach Post reported that a controversial drug manufacturer in the "blind trust" of Gov. Rick Scott (R-FL) was paid hundreds of millions of dollars by the state Medicaid program since he has been in office:

Florida Medicaid, the perennially cash-strapped health program for Florida’s poorest and sickest residents, has paid as much as $770 million for Gilead Sciences drugs since 2013, a Palm Beach Post analysis shows. That bill includes Gilead’s $1,000-a-pill cure for the liver-destroying hepatitis C virus, a cost that generated congressional scrutiny and forced Florida Medicaid to ration life-saving treatment.

And when other Medicaid programs across the nation collectively slowed purchases of Gilead’s expensive drug in 2017 in favor of cheaper drugs from other manufacturers, Florida did the opposite.

After splitting its spending among various manufacturers in 2016, Florida Medicaid went all in on Gilead, with 83 percent of its hepatitis C payments in 2017 going to the company in the stock portfolio of the governor and his wife, The Post found.

Gilead also happens to be the same company that the Florida State Legislature paid $21.7 million to treat prisoners after a federal judge found Scott's administration failed to properly care for up to 20,000 inmates with Hepatitis C.

There is currently no evidence Scott did anything untoward or that he even was aware he was invested in Gilead, and state Medicaid officials deny having any role in doctors' decision to prescribe the medication.

But the finances surrounding this arrangement are frustratingly opaque. As the Post notes, "Beyond a federally required 23 percent rebate, additional cost breaks are exempt from state and federal public records laws." Scott's blind trust, moreover, has faced a lawsuit alleging that its setup violates financial disclosure laws.

This is not the first time that Scott's financial holdings have been linked to companies profiting from state policy. He and his wife also hold a credit fund with an investment group that owns All Aboard Florida, a private intercity rail company that is developing a route Scott supported after he previously killed a federal project there. Here, too, Scott claims he was not aware of the investment, and also claims — falsely — that the state government "has no involvement" in the railway.

Scott, who is term-limited from serving another consecutive term as governor, is currently challenging Democratic Sen. Bill Nelson.