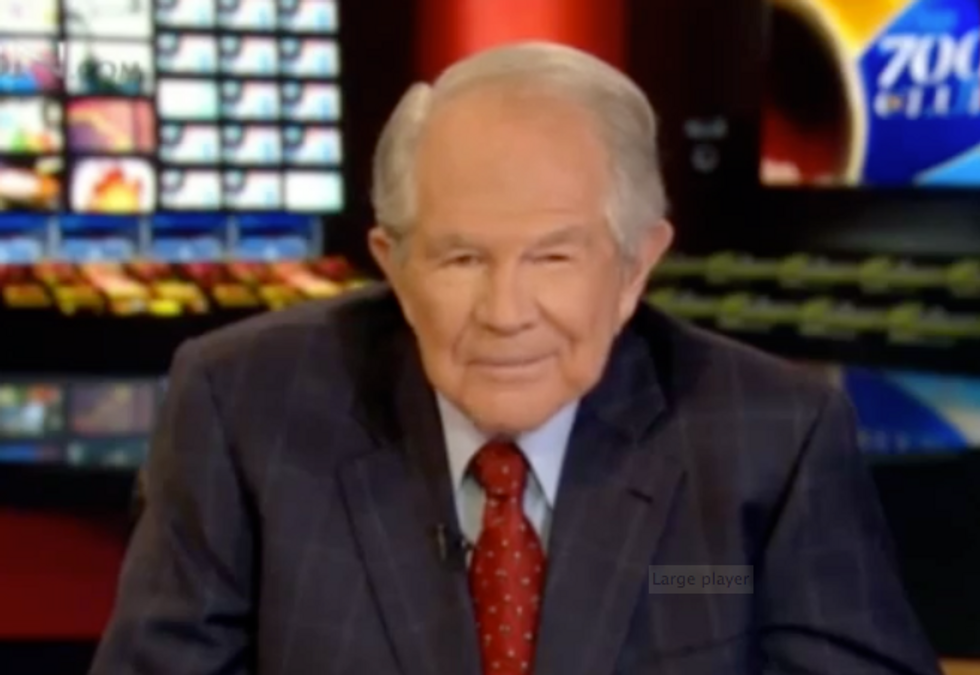 The disappearance of Washington Post journalist Jamal Khashoggi in a Saudi consulate in Turkey, and the subsequent evidence that he was murdered by the Saudi government and possibly even cut to pieces with a bone saw while he was still alive, has been met with horror and outrage around the world.

But to Pat Robertson, the founder of the Christian Broadcasting Network, this is no big deal — or at least, it's not worth canceling a huge strategic arms deal over.

"I just want to cool down the temper of those who are screaming blood for the Saudis — look, these people are key allies," said Robertson on The 700 Club on Monday. "Our main enemy in the Middle East is Iran, and the Saudis stand up against Iran. And I understand that Wahabi faith, as they practice, is obnoxious, and what they've done in relation to women is obnoxious, and some of their courts are obnoxious. But nevertheless, I don't think on this issue, we need to pull sanctions and get tough. I just think it's a mistake." He added that President Donald Trump has an arms deal in the works with the Saudi royals that will "be a lot of jobs, a lot of money come to our coffers. It’s not something you want to blow up willy-nilly."

On Tuesday, Robertson repeated himself. "You've got one journalist — who knows?" he said. "Was it an interrogation? Was he assassinated? Were there rogue elements? Who did it?"

"You've got $100 billion worth of arms sales," he insisisted. "We cannot alienate our biggest player in the Middle East."

But that alliance is getting harder and harder to defend. The Saudis are using our arms to escalate a senseless killing of civilians in Yemen. And the murder of a U.S.-employed journalist critical of the regime is simply not worth any strategic benefit or resources we gain from the relationship. Accepting the Khashoggi killing would send a clear signal to despotic regimes worldwide that we do not enforce the rights of the free press abroad — something they probably already suspect given that Trump constantly attacks the press as the "enemy of the people" at home. That would put the lives of untold other foreign-based reporters in danger, and chill the ability of journalists to do their job overseas.

And Trump, for his part, seems to be thinking along the same lines as Robertson. One of his first reactions to the Khashoggi killing was to stress that Khashoggi was not an American citizen, but a permanent resident — something that should have zero bearing on whether we allow the Saudis to torture and dismember him, but which, to Trump's mind, apparently must be taken into account when deciding whether his death is more important than $100 billion worth of arms sales.