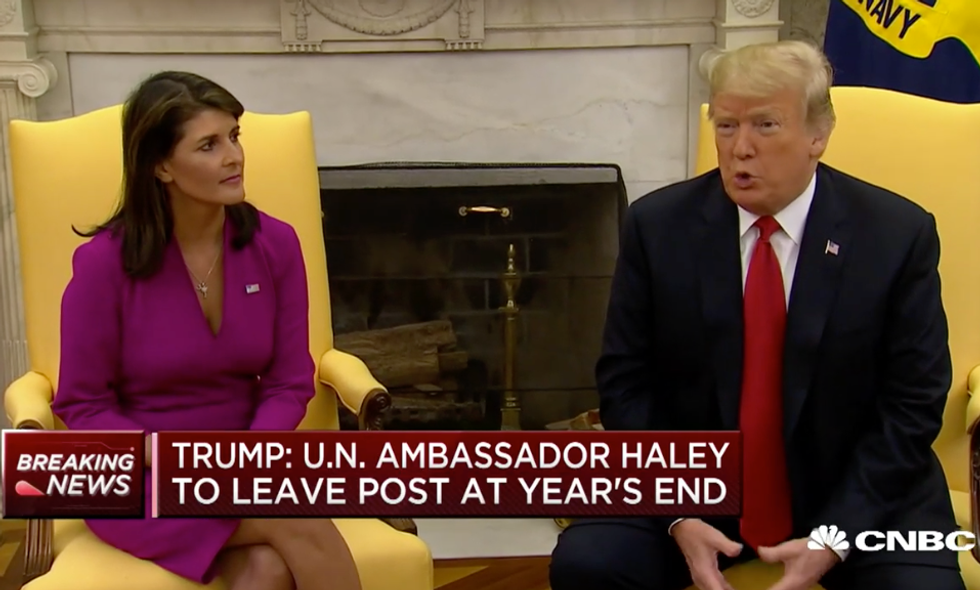 Donald Trump broken with his usual means of deposing of a cabinet member—dropping a note on their desks while they’re out of town and letting them find out by tweet—to have send UN Ambassador Nikki Haley out the door with a White House event. Haley gave a brief speech in which the most notable moments were likely her claim that she would support Trump in his 2020 effort, and her praise for the sadly unsung heroes of the Trump White House: Jared Kushner and Ivanka Trump.

Haley: Jared is such a hidden genius that no one understands.

For his part, Trump repeatedly praised Haley as making the UN Ambassador role “glamourous,” which seems at least half a notch better than Orrin Hatch saying that Christine Blasey Ford was an “attractive” witness. And while Haley claimed that the main reason she wanted to depart was simply to get some time away after eight years in government service, Trump seemed unwilling to let her go.

Trump: You'll be coming back in a different capacity. You can have your pick.

Where other Trump cabinet members have resigned with a stack of Inspector General investigations at their backs, or when Trump forced someone to dream up a reason why they had to resign, on the surface Haley appears to be stepping away from her UN role on her own accord. Perhaps the most striking thing about Haley’s time as UN Ambassador is that both in the US and around the world, Haley is regarded as a “moderate” who “held back the worst impulses” of Trump. That’s amazing … since she’s overseen the withdrawal of the US from the UN Human Rights Commission, ended funding for the UN agency that support Palestinian refugees, supported US withdrawal from the Paris climate change agreement, ended funding for Syrian stabilization, ended funding for the UN population fund, supported the movement of the US embassy to Jerusalem, supported the end of the Iran nuclear treaty, and cast one of three votes against a resolution condemning Nazism.

While Trump and Haley appeared chummy at the White House, with Trump offering Haley any role she wanted (and undoubtedly making Lindsey Graham sweat off screen), the timing of the announcement still struck many as odd. Both Trump and Haley were careful to mention that this was an idea that came to her some months ago, but Haley had been recently making changes in her staff and moving her people into new positions at the UN that seem odd for someone about to depart. This, and Haley’s vaunted ambition, have made some suspicious about her sudden need for more time at home.

The likely outcome is that Haley takes a spot with one of many Republican lobbying / bill-writing / “think tanks” and collects a fat salary while maintaining her profile on the right and prepping for a 2024 run. But … the sudden departure does seem odd.

A reminder that there is A Tweet for Every Occassion