'Naïve As a Baby’: Here Are 4 of the Worst Authoritarians Trump Has Praised and Cozied Up to as President 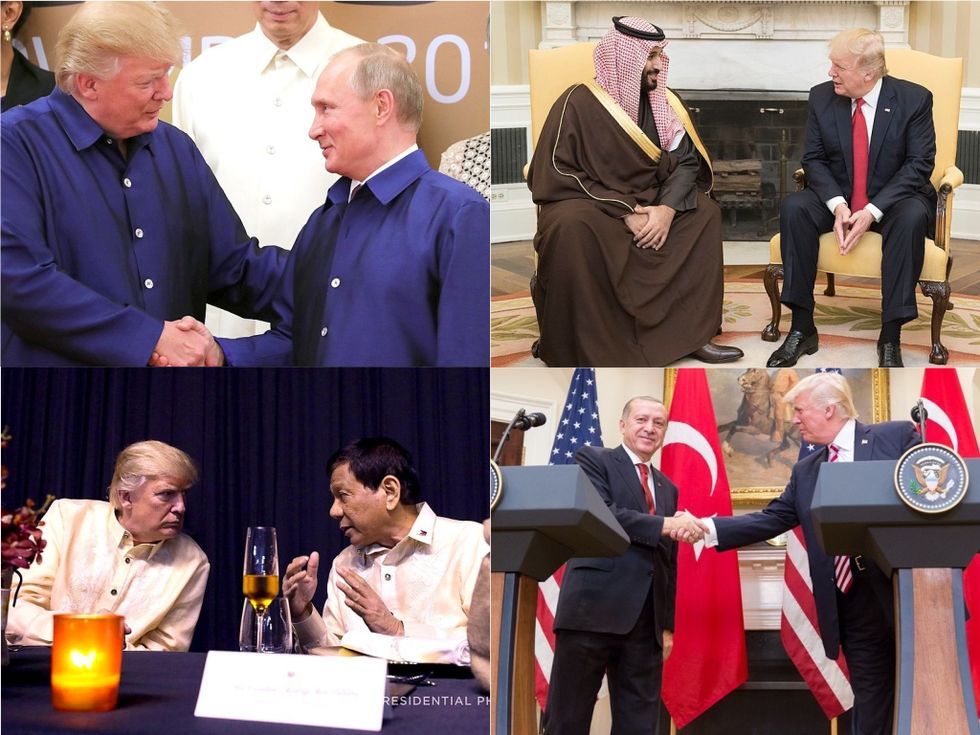 President Donald Trump has received a great deal of criticism for his anemic response to the disappearance of Saudi journalist and Washington Post columnist Jamal Khashoggi, who was last seen entering the Saudi Consulate in Istanbul, Turkey on October 2. Turkish officials have alleged that Khashoggi, a frequent critic of the Saudi royal family who had been living in exile in Virginia, was tortured and killed by Saudi agents—and that they have video and audio recordings to prove it. At first, Saudi officials insisted that Khashoggi left the Consulate alive and well; now, CNN is reporting that the Saudi government appears to be acknowledging his death and attributing it to an interrogation gone wrong. And Trump has used the words “rogue killers,” indicating he doesn’t believe they were acting on orders from King Salman or Crown Prince Mohammad bin Salman, a.k.a. MBS. But on the October 16 segment of MSNBC’s “Morning Joe,” hosts Joe Scarborough and Mika Brzezinski asserted that Trump is “naÃ¯ve as a baby” if he honestly believes that the Saudi royal family doesn’t have a hand in Khashoggi’s disappearance.

Trump and his son in law, Jared Kushner, have enjoyed a very friendly relationship with the Saudi government—which has applauded him for pulling out of President Barack Obama and former Secretary of State John Kerry’s nuclear arms agreement with Iran.  But the Saudi royal family are hardly the only authoritarians Trump has spoken highly of.

Here are four authoritarian rulers Trump has been quick to praise since becoming president of the United States.

In the U.S., the War on Drugs has been an appalling example of the “cure” being much worse than the disease itself—greatly expanding the Prison/Industrial Complex and leading to a long list of innocent people being killed or injured in no-knock drug raids. But the Philippine Drug War led by President Rodrigo Duterte has been much bloodier: since Duterte was voted into office in 2016, at least 12,000 people in the Philippines have been killed—and many of them, according to Human Rights Watch, were innocent people who were neither drug dealers nor drug users. But instead of criticizing Duterte for blatant human rights violations, Trump has praised him for trying to rid the Philippines of its drug problem.

It’s ironic that Turkish President Recep Tayyip Erdogan, of all people, would be demanding justice for a journalist who Turkish officials allege was murdered by a Saudi hit squad. Under Erdogan’s authoritarian rule, a Turkish court sentenced 24 journalists to prison on March 9. Erdogan has restricted freedom of speech, built new prisons and done everything possible to undermine democracy in what used to be one of the more democratic countries in the Middle East. But Erdogan isn’t criticizing the Saudi government out of love of the free press but rather, acting out of a sense of nationalism. If Saudi’s royal family did order a hit squad to murder Khashoggi in Istanbul, dismember his body and dispose of the body parts, they obviously had no regard for Turkish laws.

Although Erdogan and the Saudi royal family have not been on the best of terms, Trump has had words of praise for both of them. The president has been a persistent critic of the North Atlantic Treaty Organization (NATO), and he was quick to attack some of the U.S.’ closest allies—including Germany, France and the U.K.—during the NATO summit in Brussels, Belgium on July 10. But there was one NATO member Trump had high praise for at the summit: Turkey. Asserting that Erdogan, unlike others in NATO, “does things the right way,” Trump gave the Turkish president a friendly fist bump.

In July, the late Sen. John McCain was furious with Trump not only for insulting long-time U.S. allies at the NATO summit in Brussels, but also, for his July 16 meeting with Russian President Vladimir Putin in Helsinki. Declaring that Trump was promoting an “autocrat” and a “tyrant” at the expense of the U.S.’ long-time NATO allies, McCain fumed, “Today’s press conference in Helsinki was one of the most disgraceful performances by an American president in memory.”

Technically, Putin, Duterte and Erdogan are not dictators, as they were voted into office. But they have the mentality of dictators, and they are all people Trump has expressed admiration for.

Trump has had a much friendlier relationship with the Saudi royal family than President Barack Obama, who was critical of Saudi Arabia’s human rights abuses and contributions to terrorism. But Trump’s connection with Saudi Arabia is more than political: he has had business interests in that country since at least the early 1990s. And even with allegations that King Salman and Crown Prince Mohammad bin Salman ordered the killing of Jamal Khashoggi, Trump has so far refused to rule out the possibility of arms sales to Saudi Arabia.