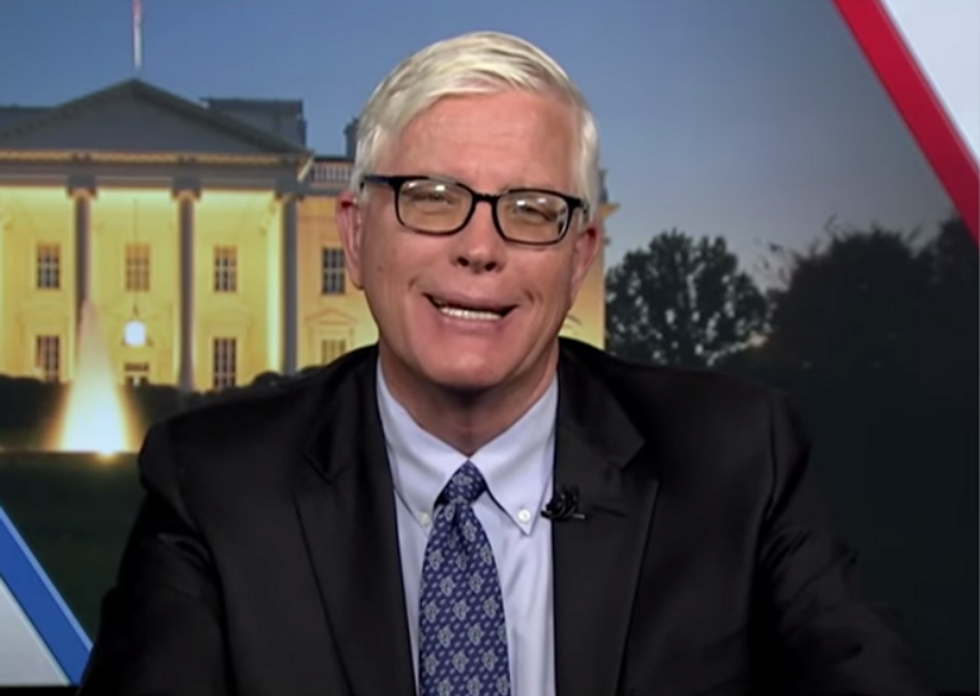 The revelation that the man suspected of sending pipe bombs to prominent Democratic figures was a supporter of President Donald Trump and registered Republican who attended the president's rallies has sparked a fresh conversation about Trump's violent rhetoric and the effect it might have on the national discourse.

But as far as Republican talk radio host Hugh Hewitt is concerned, we should actually be talking about Democrats' violent behavior — and on MSNBC's "Meet The Press" on Friday, he expounded on this to a stunned Stephanie Cutter.

"There is no equivalent on the left to the Trump inciting violence at his rallies," said Cutter.

"There is an equivalent," said Hewitt. "There is the man screaming at Mitch McConnell in a restaurant. There is Maxine Waters encouraging people—"

"Screaming in a restaurant does not—"

"We're talking about the President of the United States. Are you saying you don't agree that this man—" Cutter asked him incredulously.

"One standard," said Hewitt. "One standard. Incendiary behavior by any public official ought to be held to the same standard ... I'm talking about the guy in McConnell's face, why don't you think of that, Stephanie? Should he have been arrested under 18 U.S.C. § 351?"

Stephanie Cutter: There is no equivalent on the left to the Trump inciting violence at his rallies

Hugh Hewitt: "There is an equivalent. There is the man screaming at Mitch McConnell in a restaurant" pic.twitter.com/18tirhlbO7

To answer Hewitt's question seriously: no, that man should not have been charged under 18 U.S.C. § 351, which punishes "Congressional, Cabinet, and Supreme Court assassination, kidnapping, and assault." Nor should Rep. Maxine Waters, who has also patently done none of those things.

But more broadly, Hewitt's whataboutism is outrageous. On the severity scale, a constituent being rude to his elected official at a restaurant doesn't even come close to sending thirteen improvised explosive devices to public figures, including two former Presidents of the United States. Just as troubling is the fact that Trump himself has spent the past two years glorifying the idea of violence against many of the people this man targeted — at one point even suggesting Hillary Clinton might need to be shot.

Hewitt failed to name any Democratic official who is encouraging violent crimes against political opponents. But he still tried to pretend there was an "equivalence." And that cuts to the intellectual bankruptcy of the Trump movement when it is confronted with its own ugly undertones.