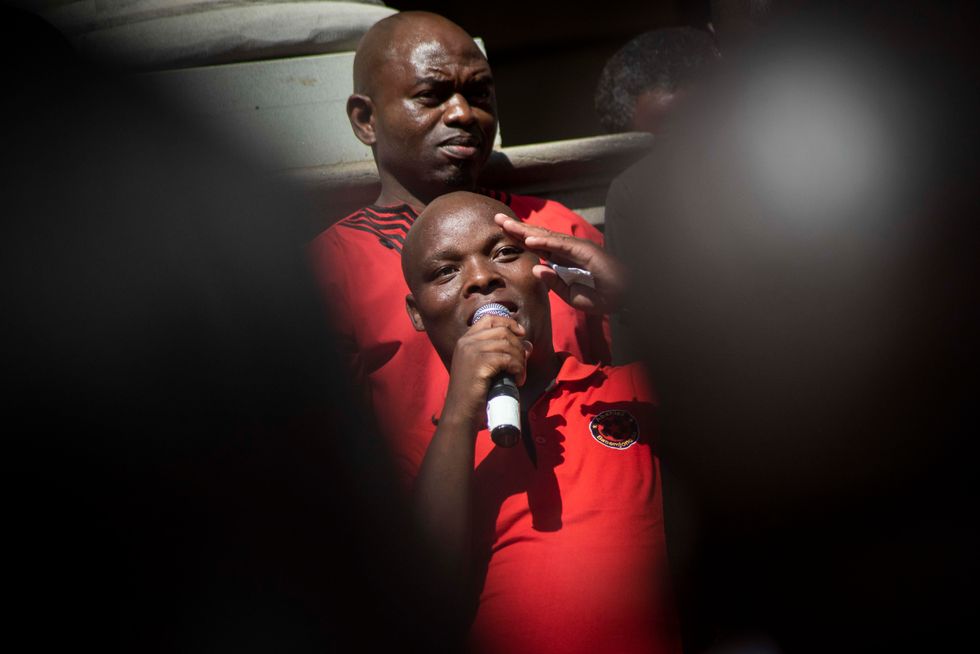 In one of few appearances since he was forced to go underground, S’bu Zikode, a founder and leader of the Shack Dwellers Movement of South Africa (Abahlali baseMjondolo), spoke at the People’s Forum in New York this month. This is not his first time in hiding—he has faced threats and attempts on his life throughout the years—and many leaders of his movement have been assassinated. In New York, S’bu spoke of the struggle of his people and how they are moving forward in the face of brutal repression. How, in his words, they are not only living but marching forward “in the shadows of death” despite frequent raids, evictions, and assassinations. Despite what he faces at home—violence, separation from his family and his community, betrayal by his comrades—S’bu is calm, collected and kind. He walks into the room with the confidence and wisdom of a leader and the humility of a soldier.

The movement that S’bu belongs to, Abahlali baseMjondolo, is among South Africa’s largest social movements, with 50,000 members in 40 settlements throughout five of South Africa’s nine provinces. The movement started in Durban in 2005 when public lands that had been promised to shack dwellers for public housing development were instead given to a private developer. Shack dwellers took to the streets to protest, blockading major roads. The uprising “was out of anger, hunger and frustration. It was out of need,” says S’bu. “There weren’t any clever individuals that sat around the table and thought of building this movement.” Since 2005, however, the movement has developed structures to strengthen and grow its membership and set a vision that goes far beyond their initial demand for housing.

While South Africa’s constitution—a victory of the anti-apartheid movement that elected its first democratic president, Nelson Mandela, in 1994—guarantees the “right to adequate housing,” at least 13.5 percent of South Africans continue to live in shacks in informal settlements without access to basic services such as roads, sanitation and electricity. There is a large gap between the rhetoric around human rights and the reality of people on the ground. Despite claims from the African National Congress (ANC) government, which has been in office since 1994, that the development of public housing “normally takes about 30 days,” many families have been in temporary camps for years. Residents complain of corruption, harassment and bribery if they attempt to gain access to public housing, the allocation of which currently lies at the discretion of those in power (for a more in-depth briefing, watch the 2011 documentary on Abahlali, “Dear Mandela”). Residents allege that, every election season, government officials appear and paint the shacks with numbers with the promise that houses are coming—if they count the shacks and families, they will know how many houses to deliver. But year after year, houses have not appeared for many of South Africa’s shack dwellers, and the old numbers are crossed out and replaced with new ones as the settlements grow and promises of public housing fade. In the interim, the same government officials surface only to destroy the shacks and force residents from their homes, using the number system to indicate which shacks have appeared between election seasons and are to be torn down. During these raids, the shack dwellers’ homes are destroyed, and some residents have even been killed (for more on the violence inflicted on Abahlali, read this recent article by South African journalist Richard Pithouse).

The threat of violence looms over the lives of Abahlali members, many of whom have been killed at protests, during evictions, and in targeted assassinations. S’bu says this is why, when members want to join the movement, they make sure they understand what the risks are: “We tell comrades from the onset when they sign up that you die here. We make sure that people are clear about the terrain that they are entering, that it is not just risky, but we have buried comrades, and we continue to bury comrades.” They know the risks. But what choice do they have? S’bu continues: “Comrades will take that risk, because they do not want to die slowly and surely.” The choice that they face is slow and certain death—to succumb to extreme poverty, violent land invasions, lack of access to proper infrastructure, health care, and education, constant assaults on their dignity—or to risk dying fighting, in S’bu’s words, “because we have no choice but to live like human beings.”

At the heart of Abahlali’s demands, and a key part of what makes them such a threat to the current system, is something much deeper than the demand for land and dignified housing that attacks the core of the profit-driven capitalist system not only in South Africa, but across the world. S’bu explains that “we are opposed to the idea that land should be bought and sold, and we struggle from below to allocate land on the basis of human needs rather than private profits. We have come up with a principle in Abahlali that the social value of land must come before its commercial value, and our lives as such must come before profits. The land was stolen from the black majority people in South Africa, [and] the majority of land in South Africa is still in the hands of minority white farmers. So, as a way to redress that, then occupation becomes key. Because how do you buy something that belongs to you? That’s the political intervention: to say, we were dispossessed of our land, now it’s the time to slowly, slowly get our land back.” Abahlali threatens to expose the reality of many of the country’s most marginalized voices and question the very value system on which it is based. This is not a demand that can be settled with a mere parcel of land.

Despite the attacks that Abahlali has faced—both from the state and from within the movement—they have remained firm in their demands and have continued to grow. S’bu attributes much of their success to a structure that gives power to the many rather than the few, and to deep organizing rather than surface-level mobilizations. “We try to make a distinction between organizing and mobilizing,” he explains. “People will tell you, ‘we have 100,000 members.’ But if you ask them just to call a meeting, people don’t show up. Because people happen to sign up a few years ago, you think they are part of you. They’re not following you. That’s why we try to make a distinction between organizing and mobilizing. If you mobilize people, they will come for that particular day because somehow you have managed to attract them. But you have not organized them because you have not been able to sustain such a gathering of them.” In Abahlali, he says, “our movement belongs to its members. We are committed to building the democratic power of the oppressed from below.”

S’bu stands before a small audience in Manhattan. He is wearing a suit, dark blue and freshly pressed. He has a small frame but the presence of a giant, carrying with him the voices of tens of thousands of shack dwellers. “I have always likened Abahlali to a sea, as waves in the sea which reject any trash you put in it. If you put trash in the sea, the waves will kick it out,” he tells the audience, speaking of the trials that Abahlali is facing. S’bu returned to South Africa shortly after the event. He worries about the risk for his wife and young children. But he believes in the power of Abahlali’s membership. The waves will cleanse the sea. “We have no choice but to live like human beings,” he says.

On Sunday, October 14, after months in hiding, S’bu was welcomed back by his fellow shack dwellers in what marks a return to his public life. The threats have not dissipated. But, S’bu says, “I have taken a decision that I will rather perish than bow to my oppressors.”