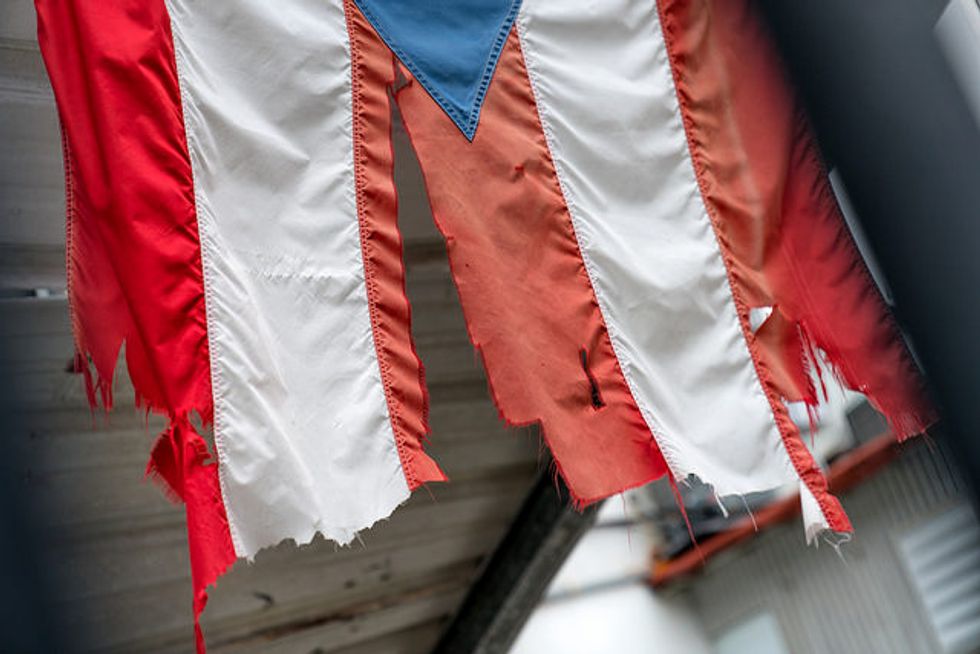 Amnesty International’s Secretary General Kumi Naidoo was recently in Puerto Rico. During his trip, Naidoo looked carefully at the aftermath of Hurricane Maria—the Category 4 hurricane in 2017 that tore through the Caribbean. No island in its path was spared, with Dominica’s Prime Minister Roosevelt Skerrit rightly calling the damage “mindboggling.” Puerto Rico, a part of the United States of America, was struck hard, but not much harder than the other islands. Yet, the relief, rehabilitation and recovery on this island have been slow—paralytically slow. Naidoo’s visit to Puerto Rico comes a year after Hurricane Maria and yet, as he wrote, “it is shocking that so many people are forced to live in such a precarious situation; even worse when they are part of one of the richest nations in the world.”

In January 2018, the Canadian journalist Naomi Klein spent a week in Puerto Rico as a guest of Professors Self-Assembled in Solidarity Resistance (PAReS). In 2017, before the hurricane, students at the University of Puerto Rico had gone on strike to defend public education. PAReS was created by some professors as a way to join the student struggle. Puerto Rico, over the course of the past decade, has been locked in a series of impressive battles over the suffocation of its public institutions by its local government and by its imperial overlords in Washington, D.C. (Puerto Rico is a colony of the United States).

During her visit, Naomi Klein visited not only areas hit hard by the storm and by the planned disregard by the state, but also places of imagination that try to create popular relief and reconstruction. These places included Casa Pueblo (Adjuntas), Dalma Cartagena’s Agriculture in Harmony with the Environment project (Orocovis) and the Mutual Aid Project (Mariana). It is here, in these places of experimentation and love, that Naomi Klein finds the antidote to the disaster capitalism that ruins Puerto Rico—ruined it before the hurricane, ruined it just after the hurricane and proceeds to ruin it for the future. Her report—first published in the Intercept—has now been released in the form of a small book by Haymarket Books.

Puerto Rico’s disaster is clear. Here is an island, part of the United States since the U.S. war on the Spanish Empire in 1898, where the people have little democratic control of its institutions and resources. Public finances in the island are a mess—the island is overwhelmed by $120 billion in debt and pension liabilities. Payment of these debts is constitutionally mandated, with debt servicing draining the state government of the ability to move an agenda to benefit the just over three million Puerto Ricans. Half the population could not find work before the hurricane struck, with public facilities killed off as the local government throttled them of funds. No wonder, then, that protests across the island had become a normal feature of life before Hurricane Maria.

One area of concern had been Puerto Rico’s electricity grid. As Naomi Klein reports, a shocking 98 percent of its electricity comes from fossil fuels. Without any local oil, gas or coal, Puerto Rico receives its fuel by ship, the people buying electricity at rates higher than paid for on the U.S. mainland. The imported fossil fuels and a centralized electricity grid left the island vulnerable to the shock of the hurricane. The grid collapsed in the hurricane, electricity not available for months and even now spotty in many places. Desire to privatize the electricity company is at the top of the list of desires by the U.S. government. Naomi Klein’s concept of disaster capitalism is made for this situation—as a disaster strikes, money is to be made by the oligarchy on the disaster, both on the defaulted bonds and on the privatization of public resources.

Naomi Klein reports on the small voices of hope from Puerto Rico—organic farming that was able to feed people even as industrial food could not be distributed, solar panels on the roofs of cultural centers that provided energy for communities with no power for months on end. These little pockets of an alternative are precisely the norm in another island in the Caribbean—Cuba.

Cuba, like Puerto Rico, was struck hard by Hurricanes Irma and Maria, but the situation there was utterly different. Suffocated by the U.S. embargo and penalized by centuries of colonial plunder, Cuba—after the revolution—has struggled to create new pathways for its people. When a hurricane comes, Cuba prepares by moving its vulnerable population to safety and by detaching its already decentralized power system. The devastation is managed, the recovery as swift as possible. It should startle the reader that even though Cuba was hit by the same hurricane, it offered to send medical personnel and electrical workers to help the people of Puerto Rico (as it had offered help to the people of New Orleans after Hurricane Katrina, a storm that also struck Cuba with equal velocity).

Disaster socialism is a key part of Cuba’s landscape. Its people are organized into voluntary units and its infrastructure is decentralized to mirror the decentralization of governance on the island.

Pushed by the blockade (since 1963) and by a deep interest in sections of the Cuban Communist Party in ecological socialism, the Cubans held an ecological conference in 1980, created the National Commission for the Protection of the Environment and the Preservation of Natural Resources and passed Law no. 31 in 1981 to protect the environment. It was based on this current inside Cuba that Fidel Castro made the comment at the 1992 UN Rio Conference on Environment and Development, “Tomorrow will be too late to do what we should have done a long time ago.”

Cuba offers a window into country-wide projects based on the principles of agro-ecology—urban farming with biopesticides, farmers cooperatives, ban on construction of homes in coastal areas, Integrated Neighborhood Transformation Workshops (TTIB) that bring together neighbors who have a range of skills to solve problems for their own area. There are limits placed by the embargo and by history—reliance upon fossil fuels is one, while reliance upon food imports is another. But, in terms of the energy grid, after Hurricane Katrina in 2005, Cuba reformed its entire system, phasing out incandescent bulbs and breaking up the energy grid. Cuba plans to have a quarter of its energy needs from renewable sources in the next decades and hopes to deepen its use of renewable energy in the years to come.

What was experienced in Cuba was also experienced recently when the left-government in Kerala, India, and the socially conscious people of Kerala worked hard against the catastrophic floods that struck the state. At Tricontinental: Institute for Social Research, there is a full dossier on that flood and on the efforts of the left government and of Kerala’s society. The experience in Cuba, in other words, is not cultural—something about the Cuban people. It is structural—something about the benefits of a socialist society and state.

Naomi Klein rightly points out that the Puertopians—the libertarian anti-social capitalists who want to devour the world—seek to turn Puerto Rico into their little paradise. Their vision for Puerto Rico resembles what Cuba was under the control of the U.S. mafia and monopoly capital before the revolution. Their utopia is Cuba, c. 1958. Klein writes of the confrontation between two utopias, that of the Puertopians and that of the agro-ecological forces from Casa Pueblo and OrganizaciÃ³n BoricuÃ¡. But, there is a wider choice—between the savage disaster capitalism pushed by the U.S. government or the socialist experiments in Cuba and Kerala. The former—disaster capitalism—is a vision of states and corporations that drain social energy. The latter—socialism—works alongside social dynamism to create a new world.