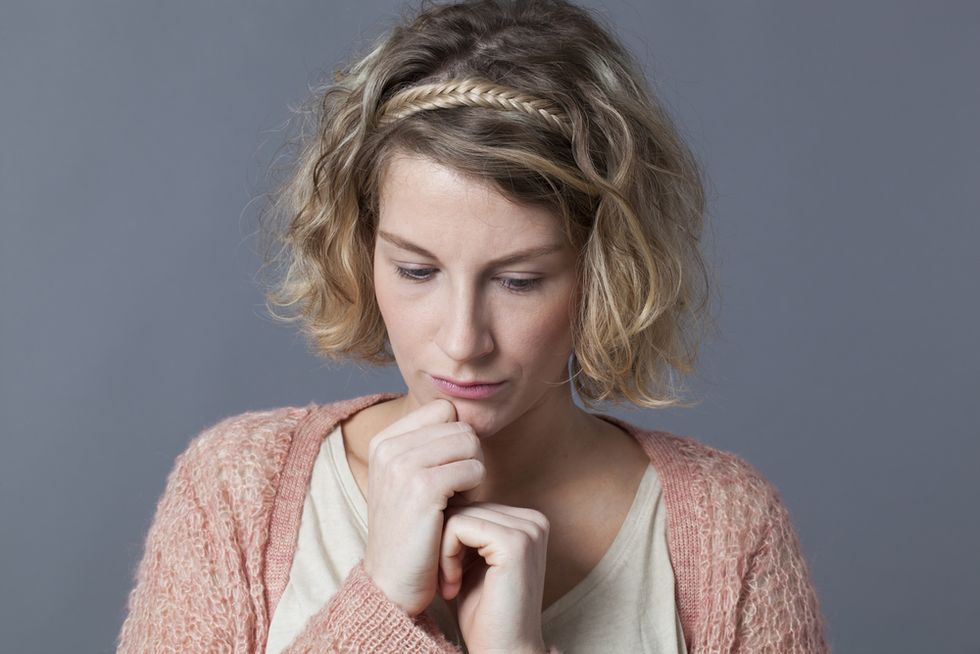 October is Breast Cancer Awareness Month, a designation meant to increase public knowledge about a disease that is predicted to kill 40,920 women in the U.S. this year. Most Americans know about Breast Cancer Awareness Month by the hard-to-miss pink paraphernalia that signifies solidarity — including the breast cancer pink ribbon, rah-rah slogans like “Think Pink,” and other catchphrases that suggest breast cancer is something you can “survive” and “beat.”

Yet that kind of language implies that when a patient is diagnosed, her (or his) happiness hinges on the success of treatment. It is a very Western way to present cancer survivorship; any cancer diagnosis is scary, as it brings to light human mortality. And while this annual crusade has good intentions, and raises money for research and organizations like Susan G. Komen, many of those who live with metastatic breast cancer — the incurable, late-stage type that spreads outside of the breast to other organs such as bones, liver, lung or brain — do not feel hope during October. And many feel alienated and even revolted by the language of hope that the campaign pushes on the public.

Breast cancer remains the most commonly diagnosed cancer among American women —  less than one percent of diagnoses occur in men — and while survival rates are increasing according to some statistics, those with metastatic breast cancer don’t have the option to have a plan that will leave them cancer-free.

“The whole pink-ribbon, breast cancer awareness campaign is focused on getting your mammograms and doing self exams, it says if you are diagnosed you will get chemotherapy, radiation, surgery and then you’re better, and we are going to celebrate and run in pink tutus,” Rhonda Brewer of Michigan told Salon. “For those of us with metastatic breast cancer, we will never have that ring-the-bell-moment and say our breast cancer is cured. We are like the kids sitting back in the back of the classroom getting an F, and it is difficult to walk into stores and see everything pink.”

The 49-year-old single mom is one of the 6 to 10 percent of breast cancer cases each year that are initially diagnosed metastatic. Her stage 4 diagnosis in May 2017 came as a surprise, as just a few months earlier she had a clear mammogram. It turned out she had dense breasts; her tumor, which spread to her lymph nodes, could not be detected by a mammogram due to this.

“The awareness [campaigns] have been about mammograms, but there hasn’t been a lot about dense breast tissue,” she said. “The first couple months I was in disbelief and shock and had intense amount of fear of dying and leaving my children, because I am a single parent.”

According to a 2010 study from the European Cancer Organization (ECCO), only 5 percent of total cancer research funding is spent on investigating metastases. More recent statistics corroborate this. It is unclear how many people die from metastatic breast cancer, as no one is required to report a metastatic diagnosis.

Lara MacGregor of Kentucky knows what it is like to live on both ends of the breast cancer diagnosis spectrum — which is one reason why she is trying to change the conversation on what it means to survive breast cancer.

“I really want to try to focus on what it means to be a survivor and what it means to live with cancer. It is like a very American perspective to be like, okay, you're a survivor if you have been cancer-free for X number of months or years,” she told Salon. “It's taking you to the future rather than being in the now.”

In 2007 at the age of 30, and 7 months pregnant with her second son, MacGregor found out she had stage 2 breast cancer. She had always lived a healthy life, she said, and had no family history of the disease. The diagnosis came as a surprise. After treatment, she was “cancer-free” for nearly seven years. In 2014, MacGregor’s life took another turn when she was diagnosed with breast cancer once again. This time it was stage 4 metastatic breast cancer.

“I think from the day you're diagnosed, you are surviving,” she told Salon. “It’s not this thing that happens after your treatment. I don’t become a survivor when I ring the bell and finish chemo. Today, I am surviving so I am a survivor, and if I can't ever ring the bell because I will never actually finish chemo, then that steals away the opportunity for me to be a survivor.”

When she was first diagnosed in 2007, she recalled nurses spoke positively about her prognosis. They showed her a “roadmap,” but the second time around, they did not.

“It was staggering to me, the difference between being diagnosed in the early stage then getting metastatic breast cancer,” she explained. “There was no nurse navigator, no timeline on what to do next, it was isolation and it opened up the door to a whole other world: the elephant in the pink room.”

Prior to her second diagnosis, MacGregor became a social entrepreneur. She started a nonprofit called Hope Scarves, which collects and sends scarves paired with stories from people who have cancer to others in cancer treatment. MacGregor got the idea when she received scarves from a friend of a friend after her first diagnosis with a note saying: “You can do this.” The woman who sent MacGregor the scarves had worn the same scarves during her own treatment. She was so moved by the gesture that she went on to gift them to others in treatment. What started with MacGregor sending out two to three Hope Scarves a week in her living room turned into a busy endeavor: volunteers and staff send out 50 scarves a week all around the world now.

MacGregor gifted her first scarves to Roberta Szpara, who has also faced an early stage and late-stage diagnosis. Szpara told Salon she found out in 2016, after being cancer-free for seven years, that it had come back and spread to her lungs and liver.

“I guess in the early stage diagnoses, there is always an end in sight, two to three years of years hormone therapy, ” she said. “You worry your cancer can come back but you move on. Now having a terminal illness, it is very different and it is isolating. There is so much money and emphasis on awareness, but we need more research to extend my life.”

After MacGregor’s first diagnosis, she encouraged cancer patients to focus on surviving and beating the disease. But following her second diagnosis of metastatic breast cancer, Hope Scarves removed the language from its website that implied hope was only reserved for those who “beat cancer.”

“Hope isn't only in beating cancer or surviving cancer and celebrating how many years you are cancer-free; hope isn't exclusive to those people,” MacGregor said.

“The thing that drives me crazy isn't the extent of how many things are pink; I just really wish that all of the pinkness led to something more meaningful,” she said. “Everybody can define that differently — that’s everyone's right — but for me, that meaning comes in the form of research and then directing money to help people with metastatic breast cancer... for research that is going to help us find more treatment actions and extend people's lives who are living with the most advanced stage of breast cancer.”