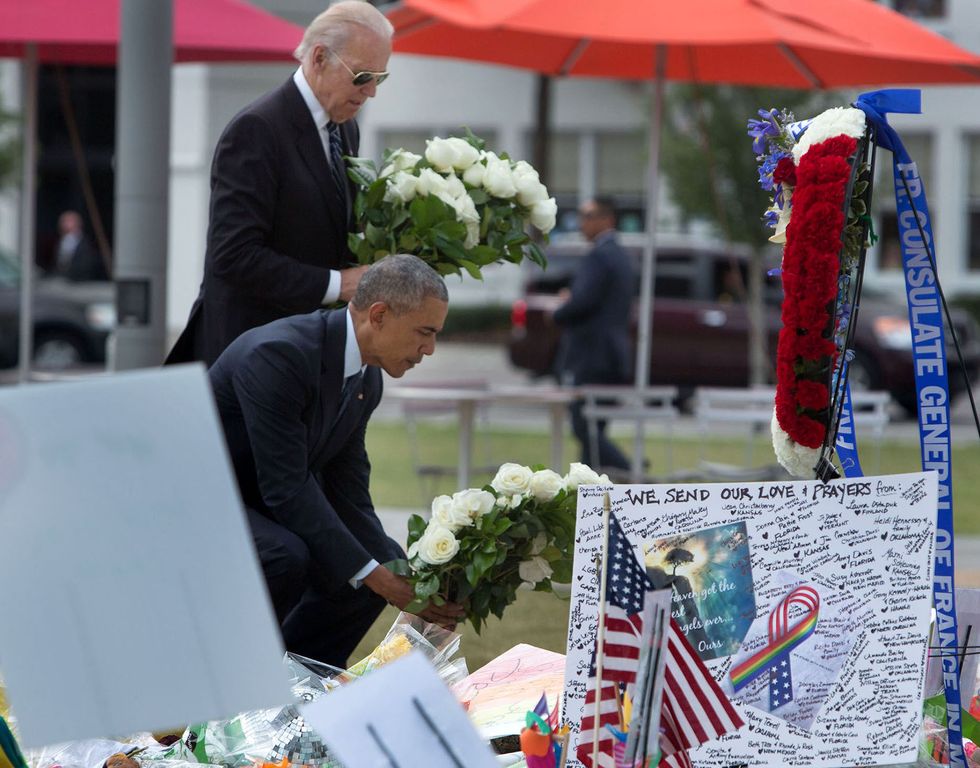 President Barack Obama and Vice President Joe Biden place bouquets of flowers at a memorial for the victims of the terrorist attack at the Pulse nightclub, at the Dr. Phillips Center for the Performing Arts in Orlando, Fla., June 16, 2016. (Official White House Photo by David Lienemann)
The Conversation
and
Randy Borum
October 28, 2018

Because just one person is at the center of the event, these sorts of attacks can seem more puzzling and be harder to explain than, say, bombings or shootings by organized terrorist groups. That also makes them more difficult to detect and prevent.

As law enforcement and military efforts attempt to reduce attacks from organized groups, lone offender attacks may become a more prevalent threat. My colleagues and I have worked to understand what we can about these attacks and the individuals who carry them out with the goal of helping to prevent them.

A long history of solo attackers

Although these recent attacks are troubling, the phenomenon of individual attackers acting largely alone is not new. In the late 1800s, anarchists (mainly Russian and European) were calling for individuals to target government, authorities and the bourgeois as a way to bring attention to their cause. They referred to this type of publicity-seeking violence as “propaganda by the deed.” Within a period of just seven years between 1894 and 1901, lone anarchist attackers had assassinated the ruling heads of state in France, Spain, Austria and Italy, and a U.S. president.

What is new is uncertainty about the attackers’ motivations. Some, like the truck driver in Nice, appear to be inspired by terrorist organizations such as the Islamic State group. Others, like most mass shooters, don’t have any obvious political or societal aim, though the attacks themselves do often sow fear. And some individuals will devise an attack and only then invoke an ideology or a “cause” as a justification, as some have suggested of the “last minute” 9-1-1 call by the Orlando nightclub shooter pledging his allegiance to ISIS.

Not every offender is really ‘alone’

In attempting to study lone-offender attacks, it can be difficult to find scholarship and data, much less observe patterns in the events. One reason is that different researchers use different definitions. Some research has included examination of attacks beyond just those conducted solely by one person. For example, some attackers have had help from accomplices. Some studies have researched only perpetrators who had a specific discernible motive (such as a political, social or ideological movement); others have included attackers with fuzzy blends of personal and wider motivations. Studies also differ on whether they label someone as a “lone attacker” if they have had contact with an extremist group.

It can be more useful to look at features of the attack, rather than just debating whether a given attacker was a “lone” offender. This is commonly referred to as a “dimensional” approach because it looks at aspects, or dimensions, of an incident, each of which stretches along a range or spectrum. Specifically, it looks at what my colleagues and I call “loneness,” “direction” and “motivation.”

Loneness describes the extent to which the attacker initiated, planned, prepared for and executed the attack independently, without assistance from anyone else. Elements of loneness include whether the perpetrator worked with any accomplices or contacted extremists, and to what degree anyone else was involved in any aspect of the attack. In Nice, for example, the attacker acted alone when he drove the truck through crowds of people but had logistical support and encouragement from a number of accomplices.

Direction refers to the attacker’s independence and autonomy in making decisions about the attack. It describes not only external influences but also the degree to which outsiders – or the attacker himself – made choices about whether, by whom, when, where or how to attack. The “Underwear Bomber” in 2012 said he was directed to deploy a bomb on a U.S. airplane, but had discretion to choose the flight and date.

Motivation is the dimension characterizing the extent to which the attack is primarily driven by a political, social or ideological grievance – or, by contrast, a personal one, such as revenge. Trying to determine what caused an individual to act a certain way is, of course, highly subjective – and made more difficult if the attacker has not survived the incident.

Interpreting evidence on motivations can be tricky. Reasons perpetrators give for their attacks may or may not be the real reasons; at least, they may not tell the whole story. A safe approach is to start by assuming that the cause of the attack may not be as simple as it initially appears. It’s important to consider evidence of various political, social or ideological grievances, but also to look at anything that may have recently happened in the individual’s life to destabilize his or her usual ways of coping with stress.

Multiple motivations are the norm. Investigators, scholars and the public at large should not work too hard to find a single master explanation. Rather, they should keep in mind the full range of possible contributing motives, and remain mindful that the combination of these factors – rather than any single one – may have precipitated the attack.

The role of mental illness

Historically, researchers have not found a strong connection between mental illness and terrorist behavior. Having a mental disorder doesn’t necessarily prevent a person from planning and executing an attack. And several studies of attack perpetrators have shown that people who attack alone are perhaps 13 times more likely to have significant psychological problems than those who conduct attacks as part of a group.

In one study, nearly one-third of 119 lone-actor terrorists investigated appeared to have a mental disorder. Studies of lone attackers of public figures have similarly found that severe mental health problems are common. Among 24 attackers on European politicians between 1990 and 2004, 10 were judged to be “psychotic.” And among 83 individuals known to have attacked, or approached to attack, a prominent public official or public figure in the United States since 1949, 43 percent were experiencing delusions at the time of the incident.

That said, it remains important to understand that, as with any other potential factor, mental illness on its own rarely provides an overarching single-cause explanation for any particular attack or behavior. In determining a person’s risk of becoming a lone offender, the presence of a mental health diagnosis may be less important than the person’s ability to form coherent intentions and engage in goal-directed behavior.

What about ‘radicalization’ as a factor?

Many lone attackers are not spotted by extremist groups, recruited and indoctrinated into a radical ideology. Even those who espouse extremist rhetoric, or claim allegiance to a cause, may not be true ideologues. Recall that lone terror attacks typically involve a blend of personal and ideological motives.

In the wake of an attack, especially if there is any evidence the subject was interested in an extremist group or ideas, a common reaction is to ask, “Where and how was he radicalized?” Some were not. Fanatically embracing an ideology is not a necessary condition for terrorism or mass killing.

People become involved in terrorism and violent extremist activity in a variety of ways, at different points in time and perhaps in different contexts. Radicalizing by developing or adopting extremist beliefs that justify violence is one possible pathway into terrorism involvement, but it is certainly not the only one.

Attackers – including lone attackers – often communicate about their intent prior to their attacks, although they may not threaten the target directly. A study examining public information about lone-actor terrorists found that in nearly two-thirds of the cases the perpetrators told family or friends about their intent to attack.

In more than half of the cases, people other than friends and family knew about the actor’s “research, planning and/or preparation prior to the event itself.” Finding ways to encourage concerned people to come forward and to facilitate reporting will be critical to long-term prevention efforts.

Media coverage alone does not cause acts of lone offender terrorism. The actors themselves are responsible. But research suggests that media coverage typically focuses much more heavily on attackers than victims, and that those media portrayals can feed a temporary “contagion effect” for mass shootings. Researchers at Western New Mexico University found that the frequency of these shootings has increased in proportion to mass media and social media coverage.

Considering that mass shooters (not necessarily just lone actor attackers) are often seeking fame or notoriety, and may desire to emulate a prior mass shooter, the contagion effect may not be terribly surprising. Media should report these events differently, particularly by avoiding details of the specific weapons used and methods of the attack, not displaying the attacker’s social media accounts, not immediately releasing the attacker’s name, and not interviewing victims and survivors when they are most vulnerable.

Terminology matters, too. Personally, I try to avoid characterizing solo actors as “lone wolves.” That’s not just because it isn’t always an accurate metaphor, but also because I don’t think glorifying the acts or actors is helpful. The FBI and others (including the “Don’t Name Them” campaign) have encouraged media to be cautious about how and how much they focus their coverage on the attacker specifically.

It is not always easy to “make sense” of lone-offender attacks. But by understanding their origins, elements and context, we can avoid misconceptions and more accurately describe the problem. That will be a key to helping detect and prevent these kinds of attacks.

Editor’s note: This is an updated version of an article first published Sept. 27, 2016.