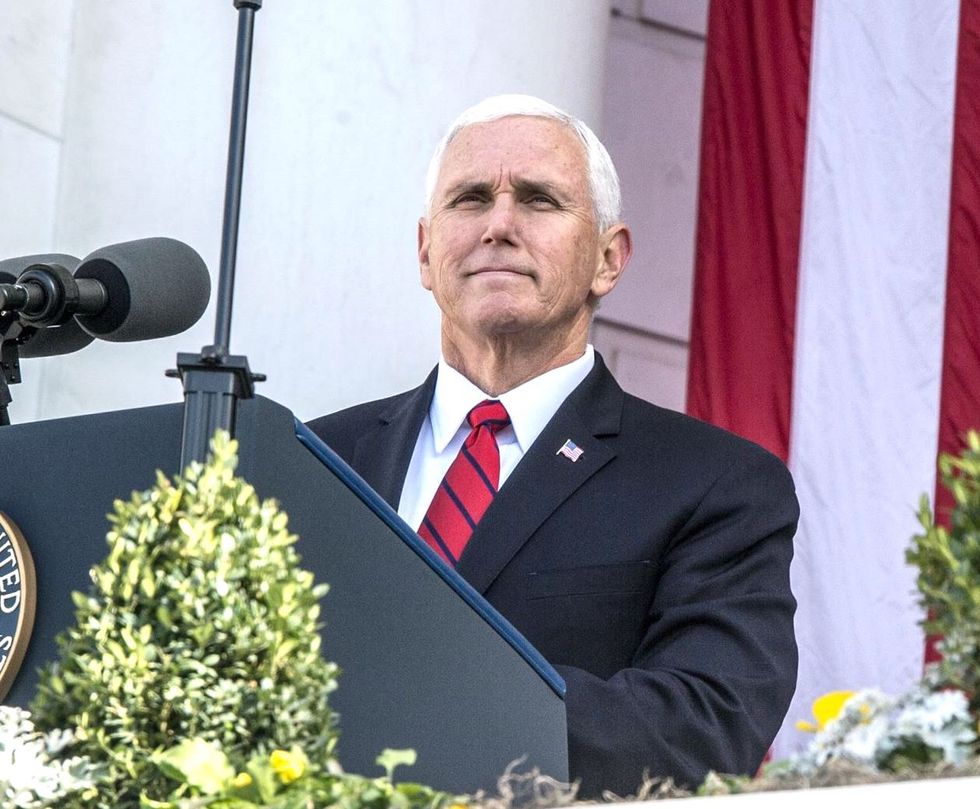 Lying isn't just a vice or an occasional misstep for President Donald Trump; it's a fundamental governing strategy. Without actively lying about supposed threats to the United States, about his own policies, and about Democrats, he would have no electoral appeal to his voters.

And it's far from limited to him. The whole party is in on the strategy, and that includes Trump's protege and potential successor Vice President Mike Pence. While he's been caught lying before — for example, throughout his entire vice presidential debate with Sen. Tim Kaine (D-VA) during the campaign — but his latest lie shows that he's willing to deceive the American people about key public safety issues just as much as Trump is.

While discussing the Central American caravan of immigrants that Trump is exploiting to make American voters afraid, Pence doubled down on the president's lies: "It’s inconceivable that there are not people of Middle Eastern descent,” he said of the caravan Tuesday at a Washington Post event.

"In the last fiscal year, we apprehended more than 10 terrorists or suspected terrorists at our southern border," he continued.

As some pointed out, Pence has made a similar claim before, stating that 7 "known or suspected terrorists" terrorists are apprehended at the border. And it was just as much a lie then.

"We found no facts that back up this border-specific tally," Politifact reported when checking Pence's claim back in February. "Nationally in 2017, the federal government says, Homeland Security stopped 2,554 individuals on its terrorist watch list from entering the country, which breaks out to seven people a day. Most of those individuals tried to enter by air, the government says."

In other words, there's no connection between Pence's claims and the reality of the U.S.-Mexico border.

David Sterman, an analyst with the New America think tank, told Politifact that even apart from Pence's complete mischaracterization of the data, there are further problems with the vice president's claim:

Also by email, Sterman cautioned that being on a watch list "is not the same as being a terrorism suspect. It’s a vast architecture that includes many names for varying levels of concern. Denying entry is a low bar to clear. Which is part of the reason citing this number to defend the immigration-centric counterterrorism strategy is misleading. It’s more of a sign that a lot is already done."

On Tuesday, the Department of Homeland Security confirmed to Politico that Pence was completely misrepresenting the data.

Pence seems to be little different than Trump in this respect. His professed religiosity aside, he has no compunction about misrepresenting basic facts to the American people for political gain, even if — or perhaps, especially if — this involves making voters terrified of people of color in order to convince them to go to the polls.