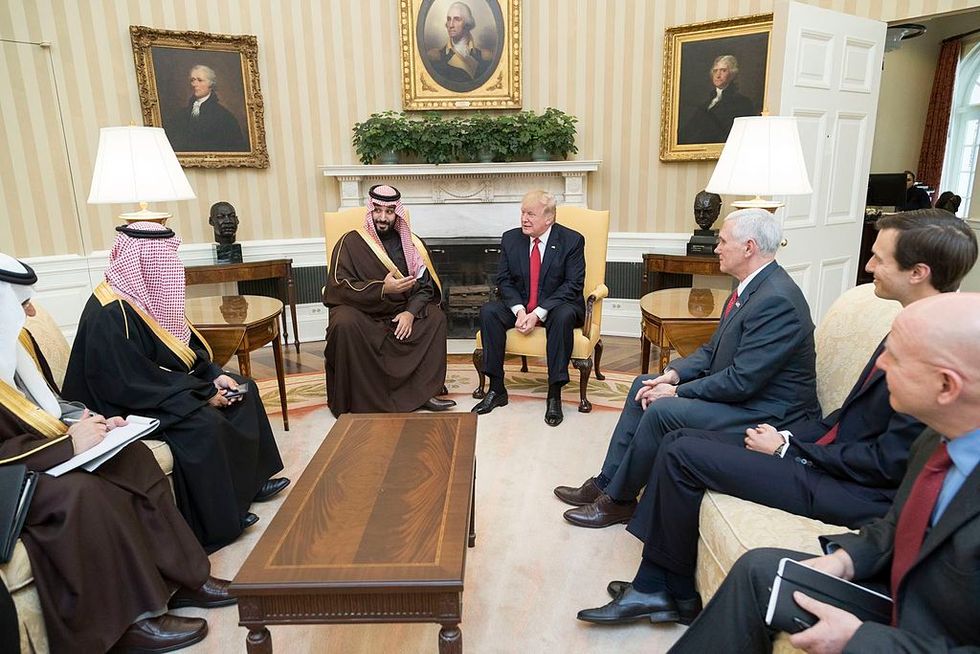 During the three weeks since the disappearance of Saudi journalist and Washington Post columnist Jamal Khashoggi, the royal family of Saudi Arabia has not been able to keep its story straight. At first, King Salman bin Abdulaziz Al Saud and Crown Prince Mohammed bin Salman, a.k.a. MBS, insisted that Khashoggi freely left the Saudi Consulate on Tuesday, October 2. Now, the Saudi government is claiming that Khashoggi was killed by accident when he got into a fight inside the Consulate—and its attempt at damage control includes firing five government officials and arresting 18 other Saudis. But Turkish officials have remained critical of the Saudi’s government’s response to Khashoggi’s disappearance, asserting that Saudi officials have been deceptive throughout this international scandal. And Turkish journalists are alleging that the Saudi government will execute Khashoggi’s killers before they can have a chance to implicate the royal family.

After Khashoggi’s disappearance, Turkish government officials alleged that they had audio and video recordings proving that Saudi agents tortured and murdered the Washington Post columnist inside the Consulate before dismembering his body with a bone saw. According to Turkish allegations, a 15-member hit squad visited Istanbul from Saudi Arabia on October 2 for the sole purpose of killing Khashoggi—and they were acting on orders from King Salman and Crown Prince Mohammed.

Erdogan, an authoritarian who has been undermining democracy in what used to be one of the more liberal and democratic countries in the Middle East, is hardly a champion of freedom of the press; countless journalists have been imprisoned under his presidency. But Saudis, by allegedly plotting to commit a ghastly crime in Istanbul, have offended Erdogan’s sense of nationalism; Turkish officials obviously feel that Saudi agents had no regard for Turkish laws or Turkish sovereignty on October 2. And Turkey’s federal government in Ankara is seeking the extradition of the 15 Saudis it believes to be part of the hit squad.

One of them is Dr. Salah Muhammad al-Tubaigy, a leading forensic pathologist in Saudi Arabia. But there will be no extradition of Mashal Saad al-Bostani, who Turkish officials have also cited as part of the hit squad: after returning to Saudi Arabia, al-Bostani (a lieutenant in the Saudi Royal Air Force) was killed in a car crash that the Turkish media has been describing as “suspicious.”

Turkish officials are not buying the Saudi government’s claim that Khashoggi was killed because he got into a fight inside the Consulate but rather, have alleged that Saudi officials carefully lured him to the Consulate and planned his murder well in advance. The Turkish newspaper The Daily HÃ¼rriyet has been alleging that those involved in Khashoggi’s killing will likely be executed in Saudi Arabia before they have a chance to implicate the royal family. On October 18, Daily HÃ¼rriyet columnist Abdulkadir Selvi alleged that MBS “would do anything to get rid of the evidence” implicating him—and that includes making sure everyone who was part of the hit squad or was present at the Saudi Consulate in Istanbul on October 2 is executed.

On October 16, the Turkish daily Yeni Sefak reported that one of the people who could be heard in alleged recordings of Khashoggi’s torture and murder was Mohammed al-Otaibi, head of the Saudi Consulate in Istanbul. According to Yeni Sefak, al-Otaibi can be heard in the recordings saying, “Do it somewhere else outside, or I will be in trouble”—to which one of the members of the hit squad responded, “Shut up if you want to live when you are back in Saudi Arabia.” Al-Otaibi returned to Saudi Arabia on October 16.

President Donald Trump has been reluctant to criticize either King Salman or Crown Prince Mohammed, indicating that he believes they had nothing to do with Khashoggi’s death and are pushing for a thorough, comprehensive investigation. But Turkish government and law enforcement officials and members of the Turkish media have a very different viewpoint.

In the Turkish media, the arrest of Khashoggi’s alleged killers is being portrayed as a deceptive cover-up, with members of the hit squad taking the fall for the royal family—and President Trump, desperate to maintain his close relationship with King Salman and MBS, will be quick to believe whatever explanations the Saudi royal family comes up with.